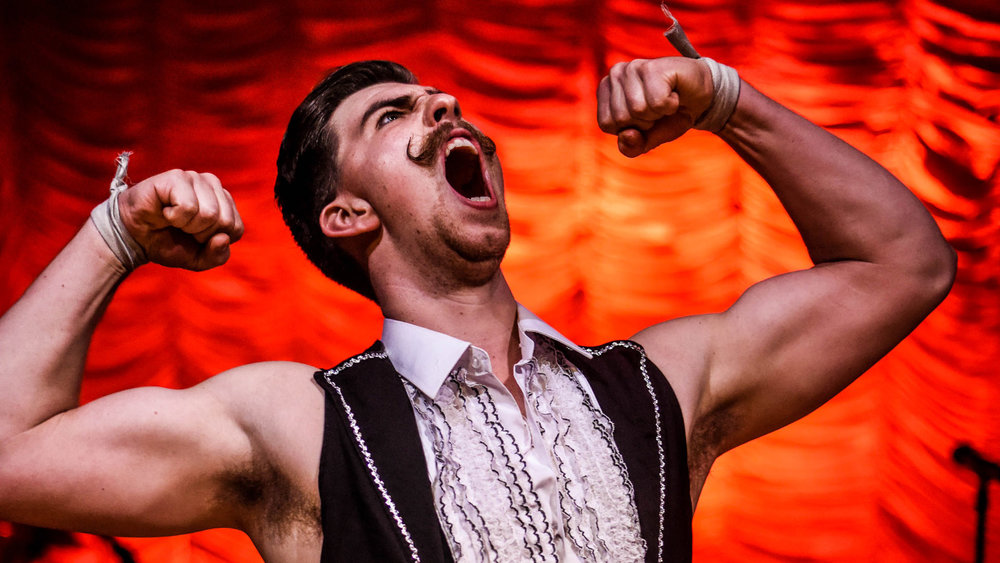 Company 2 return to the Edinburgh Festival Fringe with Le Coup which takes acrobatic stunts and places them in the context of a early 19th Century travelling boxing show. It’s a unique premise with an array of acrobatic spectaculars, but the show never achieves the rowdy, fun atmosphere it sets out to.

Split into sections and implored by our hostess to support a particular “fighter”, the performers spin, climb and flip their way through various bouts of acrobatic boxing whilst supported by a vaudeville backing band.

Le Coup is an aesthetically exciting piece – whether it be through the vintage strongman style costumes of the stars, the dazzling acrobatic displays, or the woozy live blues-jazz soundtrack provided by our backing band. Mixing bouts of acrobatics with playful musical numbers and variety acts (a ‘clown’ riding a tiny tricycle, a turtle race with two female gymnasts wearing wooden barrels, and a morose country singer provide some of the interludes between displays) – helps Le Coup impress as an original variety piece.

Gymnasts, The Ugly Hungarian (actually very handsome), The Sisterless Twin, Sally the Alleycat, Cross Dressing Barry and The King of the Tent, are all on top form to entertain us with impressive routines. A bowling ball display, throwing each other round the stage, climbing up each other, trapeze acts, and swinging each other by the hair are a few of the absorbing routines – which I’m sure have much more sophisticated names than the way I’ve described them.

Yet Le Coup is let down by its structure – we are encouraged to root for particular fighters – yet in an hour show it is a challenge to get to know the personalities of the gymnasts that we are expected to root for. Often these moments of being encouraged to chant and shout for fighters – to create the rowdy vaudeville boxing aesthetic that the show sets out to – are met with silence from the audience. 6pm audiences are perhaps not excitable enough to deliver to interaction that performers call for. The result can be a somewhat flat atmosphere.

Le Coup shines thanks to its impressive acrobatic routines which are skilfully performed by the able and entertaining performers. The live band and vaudeville aesthetics help provide a distinctive visual style, yet the atmosphere here is somewhat lacking.