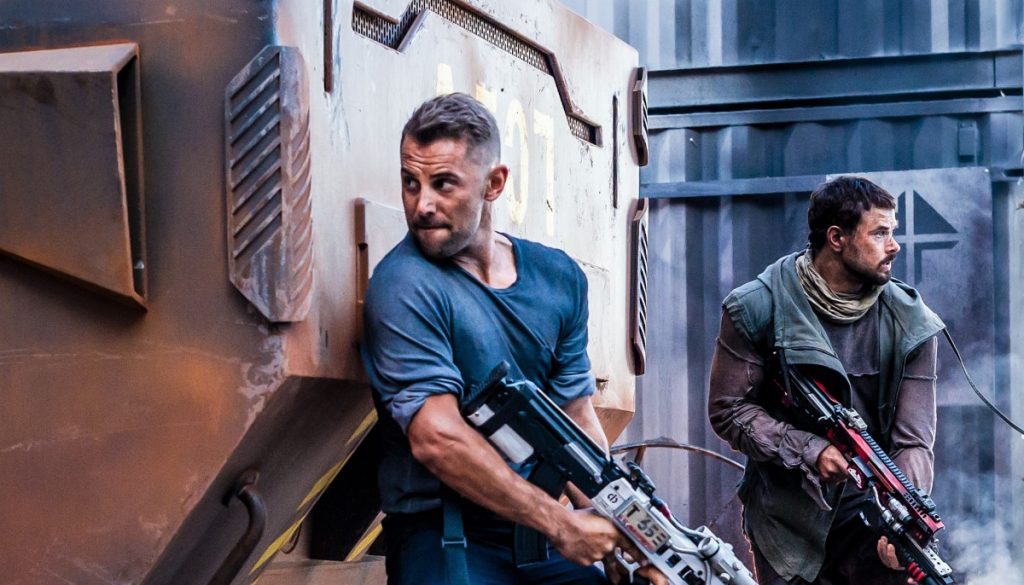 Actor
Daniel Macpherson reunites with his Infi colleague, writer-director
Shane Abbess, in Origin Wars (internationally titled Science Fiction
Volume 1: The Osiris Child). What is once again evident is that Abbess is one
of the most exciting filmmakers in contemporary sci-fi – capturing both a love
for the genre and a progressive approach to its future.
Abbess
and co-writer Brian Cachia craft a tale that follows Kane (Macpherson), a
lieutenant working for shady military contractor called EXOR, who comes into
contact with former convict Sy (Kellan Lutz). The pair are thrust into a battle
to save Kane’s daughter from EXOR’s destructive plans and the genetic
experiments they have created that roam the barren earth.

Crafted with a confident aesthetic, Origin Wars is a visually impressive piece
that manages to create a slick looking vision of the future. Tensely edited
action set pieces and convincing CGI creations and sets give the film a visual
clout that helps it stand up against much of the big screen sci-fi epics that
we have seen in recent years. This helps Origin Wars transport us to this
futuristic world and envelop us in Cachia and Abbess’ narrative.

There
are echoes of familiarity in many of Origin Wars‘ narrative elements – with
many of the barren desert sets and action pieces feeling reminiscent of
classics like Mad Max. Yet Origin Wars manages to pair these familiar tropes
with fresher narrative angles – such as Kane’s hunt for his daughter. This core
narrative strand paired with EXOR’s developing of a deadly virus which quickly
goes out of control (turning a prison full of convicts into vicious monsters),
makes for a fun pairing. What follows is a mash-up of action set pieces
confidently performed by Macpherson and Lutz.
Macpherson
proves a magnetic lead – equally confident in the action sequences as he is in
the weightier dramatic moments. Lutz, a genre regular, brings a welcome gusto
to the proceedings as escaped prisoner Sy.
Origin
Wars is an effective, independent sci-fi that proves that you don’t necessarily
have to go to the cinema to see well-crafted and action-packed new additions to
the genre.