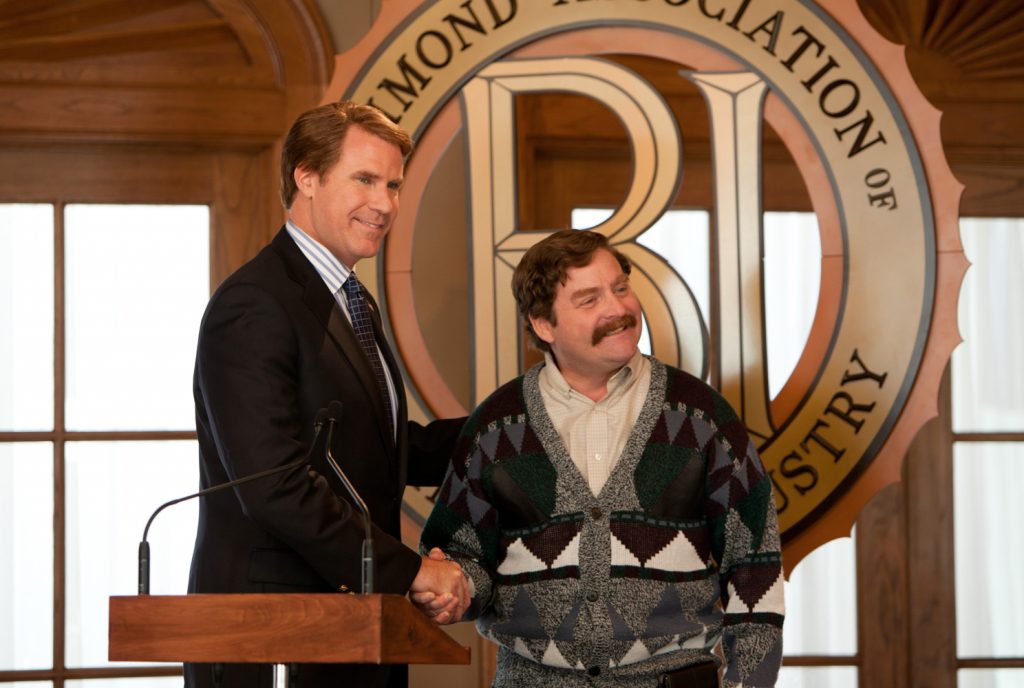 Jay Roach directs The Campaign, an over the top look at the American election process starring Will Ferrell and Zach Galifianakis. Given the stars involved it is evident that The Campaign is not going to be the most cutting of satires, expect bawdy cartoonish humour with some amusing performances.

Cam Brady (Will Ferrell) is running unopposed for his fifth term in US congress until sweet but naive, Marty Huggins (Zach Galifianakis) is put forward for the race by scheming CEOs, The Motchs (Dan Akroyd & John Lithgow).

Roach has a clear understanding of the US election system (just watch Recount or The Game Change) and manages to craft a viable backdrop for the over-the-top comic proceedings that come with Ferrell and Galifianakis. Alongside his unquestionable sense of comic direction, The Campaign allows Roach to have fun, launching into a bawdy satire on the modern world of US politics. Seeing the political game play between two completely inane candidates makes for an entertaining premise – from seeing battles to kiss babies (which ends in a truly hilarious Ferrell-Baby punch-up) to the use of adulterous sex tapes as campaign ads.

As is to be expected, this is not particularly cutting or subtle satire with The Campaign focusing on crude, blatant humour. A lot of the time this tends to rely on hit-and-miss toilet humour, which pales when compared to the more cartoonish, mad comic set pieces. Expect belly laughs for some scenes, including one involving a drunken Ferrell stealing a police officer’s patrol car and another featuring a confessional dinner at the Huggins’ household. 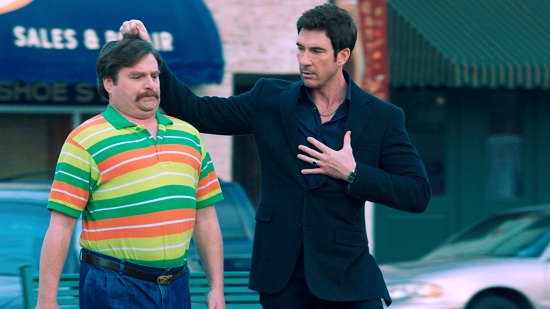 The Campaign knows how to utilize Ferrell and Galifianakis’ strengths for maximum comic appeal. Ferrell slips into his stupid, over-confident sleazebag character, with Cam Brady being a slightly more bawdy version of his George W. Bush impersonation. Ferrell’s ability to utter the most ridiculous line with utmost conviction always proves amusing. The same can be said with Galifianakis – anything said in the effeminate voice of Marty Huggins immediately gets a laugh, or even simply watching him strut about with his two pugs is entertaining. The rivalry between these two dimwitted character is perhaps the highlight of The Campaign, with the pair proving an incredibly watchable on-screen duo.

Supporting turns from comic icons Dan Akroyd and John Lithgow add some fun to the proceedings, with both bringing a hammy charm to the roles of the Motch Brothers. Although, I couldn’t help but wonder how much more exciting The Campaign may have been with Akroyd and Lithgow in the leading roles. Katherine LaNasa and Sarah Baker also entertain as each candidate’s spouses. Brian Cox features as Huggins’ pushy father who entertainingly describes his son as looking like “Richard Simmons’ shat out a hobbit!” However, on chief scene stealing duty is the handsome (and age-defying) Dylan McDermott, who plays Huggins’ shady campaign manager.

The Campaign is a bawdy, entertaining look at American political system. Well utilized leading turns from Ferrell and Galifianakis deliver the zany humour that viewers have come to expect from the pair, and ensures most fans will not leave disappointed.
RATING: 3/5