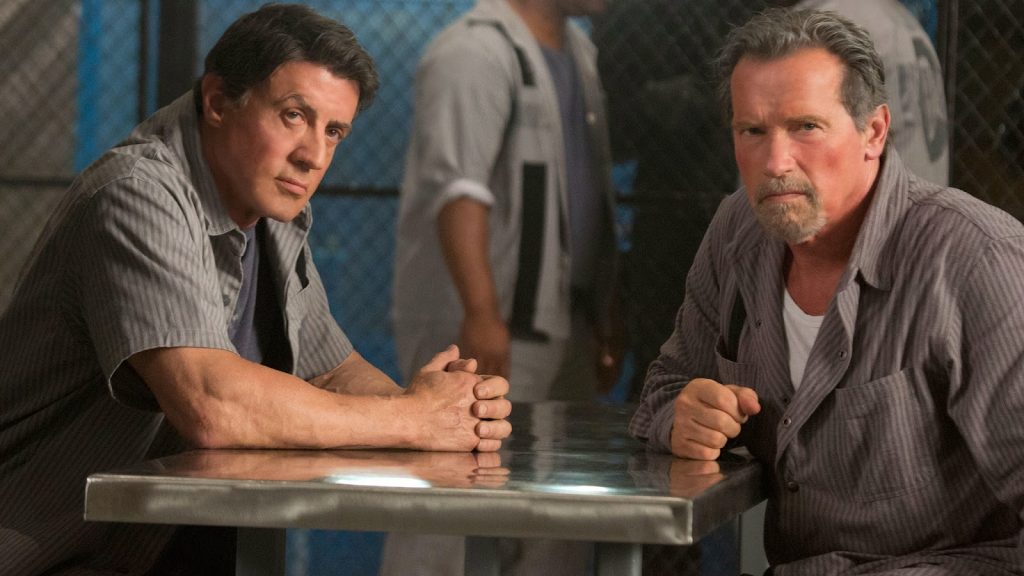 It is hard to believe that in their long-standing careers Sylvester Stallone and Arnold Schwarzenegger had never collaborated prior to their brief exchanges in The Expendables series. Mikael Håfström’s Escape Plan changes this by pairing the two action icons in their own star-vehicle, which is likely to go down a treat with both their fans and casual viewers.
Stallone plays Ray Breslin, a security expert paid to test exactly how inescapable the world’s most dangerous prisons are. Breslin faces his most extreme challenge when he is forceably taken to a high-tech maximum security prison that remains off the grid – here is faced with the treacherous Warden Hobbes (Jim Caviezel) and befriended by the mysterious Rottmayer (Arnold Schwarzenegger).
Surely Escape Plan’s main challenge is providing a narrative that allows Stallone and Schwarzenegger to do what they do best – that is kicking ass and delivering plenty of wisecracks. Writers Miles Chapman and Jason Keller provide us with a screenplay that features all the trappings of your usual prison-flick from gang-fights to corrupt guards – however, they shine most when they deviate from the cliches of the prison film during several inventive and action-packed escape sequences. There are plot twists that can be spotted from miles off and dialogue that feels straight out an eighties B-Movie – but this arguably adds to the occasionally cheesy charm of Escape Plan. This isn’t trying to redefine the action film, and if viewers accept this there is lots of fun to be had.
Håfström’s direction is slick, albeit slightly forgettable – however, he does captures a stirring and often uncomfortable sense of claustrophobia in the Big Brother-esque (in the 1984 sense) facility. The glass cells and looming ceilings, surrounded by industrial looking piping and equipment craft a bleak and hopeless setting for Stallone and Schwarzenegger to unleash their ever-watchable brand of action chaos. Håfström also captures a jarring sense of brutality in the torture and action sequences, lending a healthy dose of grit to Escape Plan.
However, the real driving force behind Escape Plan is the pairing of Stallone and Schwarzenegger – which thankfully lives up to its promise. Both stars are as psychically convincing as they were in their eighties heyday and remain completely capable of dominating our screens. Stallone leads with a powerful presence as the security expert out of his depth, whilst Schwarzenegger has some scene-chewing fun playing second fiddle to the Rambo star. There are plenty of impressive action scenes and well-utilised opportunities for fun between the pair (one scene in particular – ‘smile for the camera’ – provides a real laugh out loud moment). This fun continues in the outlandishly fun conclusion, which features the iconic Schwarzenegger blasting a heavy-duty machine gun from a helicopter.

A top-notch supporting cast sees Jim Caviezel enjoy playing the treacherous warden, Sam Neill as a the prison doctor, Curtis ’50 Cent’ Jackson as Breslin’s outside support, and Vinnie Jones as a twisted guard.

Escape Plan shines as its not simply a throwback to the heyday of its stars, but a thoroughly enjoyable modern action film in its own right. This pairing of Stallone and Schwarzenegger is one of the most watchable action events of the year.