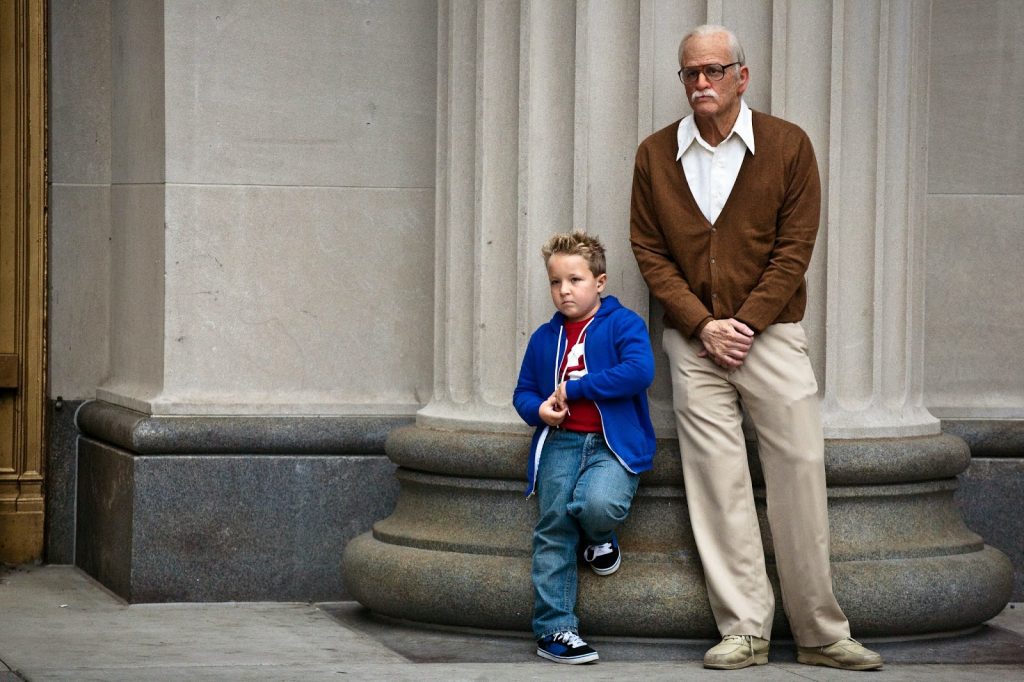 Johnny Knoxville’s Jackass character Irving Zisman gets his own big screen spin-off in a similar vein to Sacha Baron Cohen’s Borat and Bruno. Like these films Bad Grandpa is mainly comprised of various skits on the unsuspecting public, held together by a loose (and I mean very loose) narrative. However, many of these skits fail to hit the mark as they’ve either been overexposed in the trailer or simply are not very funny.

The said loose narrative follows eighty-six year old Irving Zisman (Knoxville) as he travels cross-country to drop off his eight year old grandson, Billy (Jackson Nicoll) off with his father. Irving teaches Billy about stealing, swearing, and causing chaos at a beauty pageants.

Bad Grandpa sticks with the traditional visual style of Jackass, using a mix of handheld and secret cameras to capture the multitude of authentic responses to the chaos that Irving causes. The scripted sequences – often focussing on Irving and Billy’s car-rides take a more traditional filmic approach. This fusion of two styles results in a watch that never truly feels cohesive or natural which hampers the comic impact of some of the gags. The scripted dramatic scenes often feel flat and jarring – especially when followed or proceeded by the more amusing and traditionally-Jackass style scenes which depend on public reactions.

Unfortunately, almost all of the amusing Irving gags and audience reactions to them have already been showcased in the film’s various trailers. These will probably be far more fresh to someone who has not watched the film’s promotional material – but seeing the geriatric blasting through a store window on a children’s toy or young Billy entering a Toddlers and Tiaras style pageant (that feels very Little Miss Sunshine) – is not overly amusing on the second or third watch. However, less exposed scenes like Knoxville causing chaos in a male strip club with a hanging prosthetic set of testicles supply some laugh-out-loud, cringe-inducing laughs. Likewise a scene where Knoxville squirts a mysterious brown substance onto the wall of a restaurant – horrifying a group of elderly diners. There is also a rather amusing scene involving two bewildered post office clerks. The laughs here are big, unexpected, and very very crude.

Bad Grandpa does show a little heart towards its conclusion – which is surprisingly effective. We see an emotional Irving faced with the prospect of giving grandson Billy away to his deadbeat dad. Here the impact of these awkward scripted scenes does come into effect – and results in something truly quite sweet for a film that had otherwise been so crude.

There are a few good laughs in Bad Grandpa, but sadly there just is not enough of them. The mix of scripted and audience reactions creates an awkward mix that never really naturally flows in the way that Baron Cohen’s creations’ big screen adventures do. Bad Grandpa is not bad, it is just not as fun as it should have been.


Originally featured on The People’s Movies.