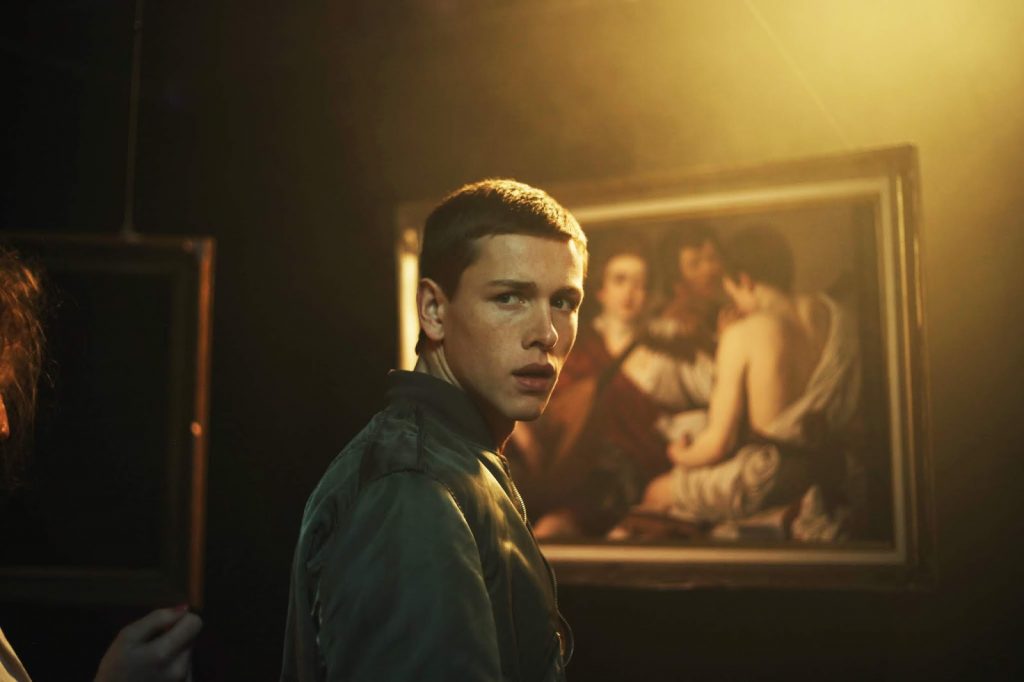 After a stellar turn in Eliza Hittman’s gay-themed drama Beach Rats, Harris Dickinson leads Postcards from London – writer-director Steve McLean’s (Postcards from America) love-letter to the neon-lit streets of Soho. McLean’s film is part idealistic fantasy celebrating the aesthetics of some of the queer art world’s most iconic figures (Caravaggio, Francis Bacon, Lucien Freud) and part tribute to the lost world of Soho’s educated rent boys and their post-coital witticisms – all set against a coming of age in the big city story.

After leaving Essex to find fortune in London, the naive Jim (Dickinson) is taken under the wing of The Raconteurs, a highly cultured group of Soho’s rent boys. They spot Jim’s physical prowess and help develop his artistic knowledge which subsequently helps instigate his transformation into one of Soho’s premier muses.

McLean’s Soho is almost fantastical and surreal, which makes a fitting canvas for this dreamlike narrative to unfold upon. This Soho of narrow alleyways, neon-lights, seductive interiors, inviting dive bars and kitsch bohemianism is the perfect dreamscape for the wide-eyed Jim to have his avant-garde awakening. Costumes (a Querelle-esquebars of handsome sailors) and cutaways to live-action recreations of Caravaggio’s work help Postcards from London feel like an ever-shifting dreamscape that successfully combines the kitsch charm of Soho’s gay scene with the baroque and queer artistry.

Given McLean’s rich aesthetic style, it would be easy for the heart of Postcards from London to be lost – but this is a film overflowing with warmth, optimism and humour. There is a wit found in the depiction of the trappings of queer life in this somewhat timeless fantasy – although there are mobile phones and 21st Century features, this nonetheless feels like a queer tale that spans the ages capturing the beating heart of queer life from the Roman and baroque period liberalism to bawdy neon excess in 70s/80s Soho.

McLean’s writing injects heart and humour throughout. There is a relaxed confidence underneath the initial trepidation of Dickinson’s Jim as he embarks on his artistic vocation throughout the streets of Soho immersing himself in the culture and establishing himself as a muse. Dickinson is warm, meets the physical peaks of the role – with a body truly like one of Caravaggio’s most impressive subjects, and an intelligence which feels natural and welcoming. He is the beating heart of Postcards from London, which help showcase the film not only as an aesthetic triumph but a heartfelt slice of the gay experience.