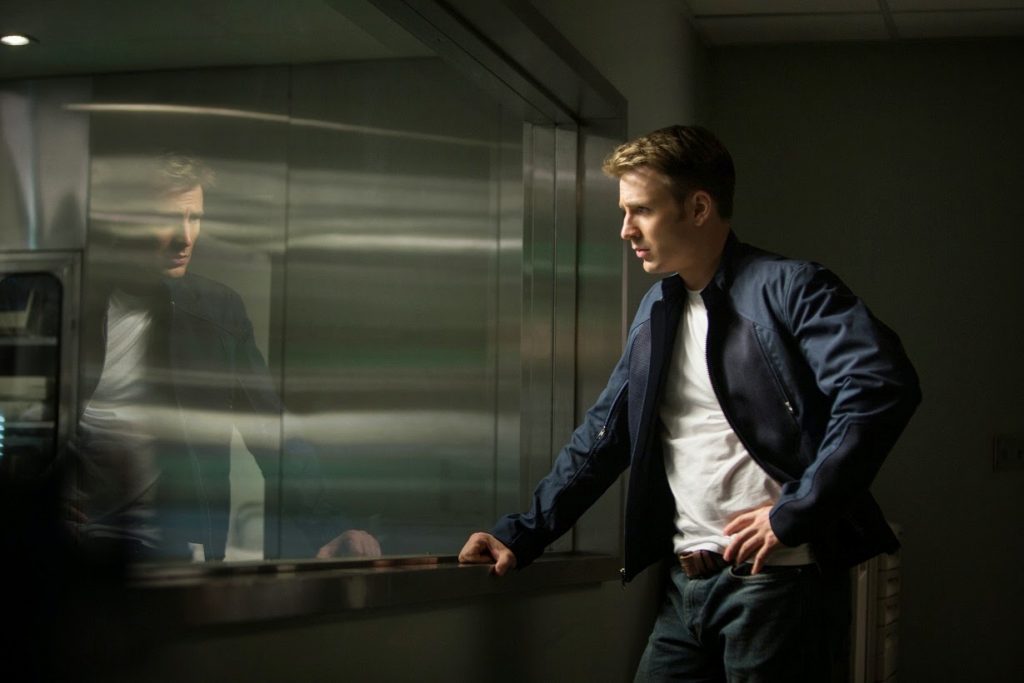 Making a rapid departure from the war-themed territory of Captain America: The First Avenger, sequel The Winter Soldier serves as the first solo outing that follows Chris Evans’ titular character in the 21st Century. This temporal change also brings a shift in narrative dynamic with The Winter Solider taking on more of a political-action-thriller shape to the traditional Marvel action-adventure fare.

Steve Rogers aka Captain America’s (Evans) quiet life in Washington DC is disrupted by an attack on S.H.I.E.L.D. leader Nick Fury (Samuel L. Jackson). Joined by Black Widow (Scarlett Johansson), Rogers becomes tangled in a web of intrigue which ultimately leads to a conspiracy within the very heart of S.H.I.E.L.D.

Whilst there are still plenty of fun set-pieces and moments of well constructed action chaos, it feels as if Captain America: The Winter Soldier is taking a more grown up direction to Joe Johnston’s previous outing. Screenwriters Stephen McFeely and Christopher Markus merge the Marvel universe with the hard-boiled, paranoid atmosphere from great American conspiracy features like The Parallax View, All the President’s Men and Three Days of the Condor (the latter two sharing a star in Robert Redford – no doubt a factor in his casting as Alexander Pierce here). As well as embracing the ever-twisting and turning narrative complexities of these features, McFeely and Markus have firmly embraced the Marvel universe and closely tie in a number of these plot-developments with previous entry, The First Avenger. The return of Hayley Atwell’s Peggy Carter, flashbacks to Rogers’ early life and a few unmentionable spoilers ensure that whilst distinct and more adult, this wholeheartedly remains a Marvel film.

Directors Anthony and Joe Russo present us with a variety of tense set-pieces – none of which are very inventive or memorable (but which Marvel ones are?) – but fully get the job done ensuring it is a challenge not to get absorbed in the chaos. The standout sees an attack on Nick Fury’s gadget-packed SUV – however, Rogers taking out an elevator full of armed goons and the airborne finale also make for relatively exciting watching. The Russos also add a wry sense of humour to The Winter Solider which mostly comes through Rogers’ disassociation with the 21st Century and the repartee between he and Johansson’s Black Widow. There is also sweetness in equal measure, marked by the return of fan-favourite Peggy Carter played by a heavily made-up Hayley Atwell.

Now his third outing as Captain America, it feels as if Chris Evans has truly come into his own in the role. Whilst the character’s over-righteousness and obsession with good morals can grate (well, he is Captain America after all), Evans manages to make the character warm, physically convincing (queue a compulsory shot of Evans’ bulging muscles in a tight vest), and likeable. It also feels like the first proper outing for Johansson’s Black Widow, a character who never felt utilised in her previous outings – here she serves as the film’s female lead and gets just marginally less screen time than Evans. However, the biggest new addition to the cast is Robert Redford who steps into the role of shady S.H.I.E.L.D. chief Alexander Pierce. Whilst not characteristically Redford’s sort of film, the iconic star commands audience attention when he appears on screen – most interestingly in the film’s final moments where we learn more about his motivations. The excellent cast is wrapped up by the ever-present Samuel L. Jackson and Cobie Smulders, as well as eager new recruits Emily Vancamp, Frank Grillo and Anthony Mackie.

The first of the post-title scenes gives us a little teaser about The Avengers: Age of Ultron, whilst the second is not particularly worth waiting for.

Captain America: The Winter Soldier is the strongest Marvel film to date and continues the Marvel cinematic universe’s upward climb in quality. With a narrative that feels fresh and inventive through its conspiracy dynamic, tense action and a focus on the excellent Evans and Johansson – The Winter Soldier is a treat from start to finish.