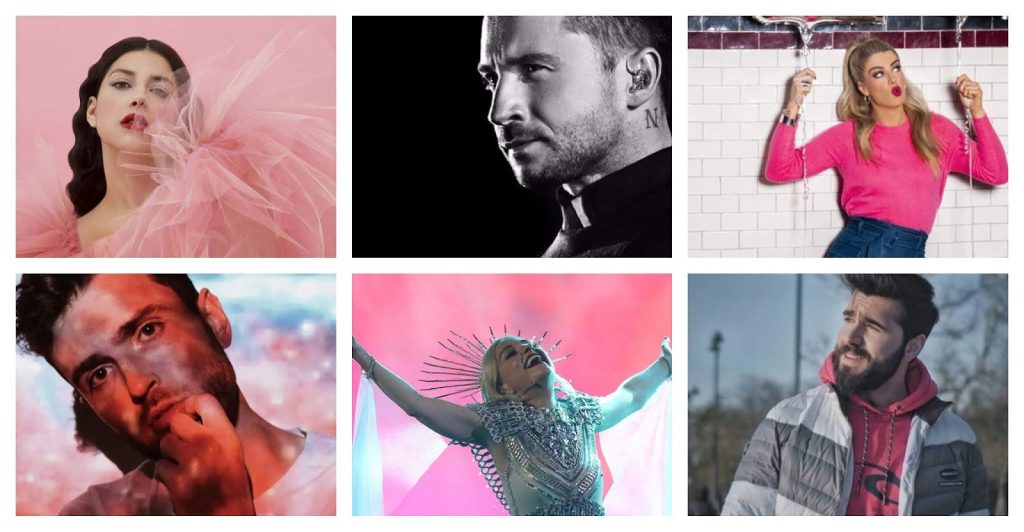 The last few National Selection Contests trickled out this weekend and we have our full crop of Eurovision entrees for the 2019 Eurovision Song Contest in Tel Aviv. Like so many of you, we’ve delighted in sifting through the entries this weekend and are proud to bring you Culture Fix’s Ones to Watch this ESC. We’re going to be realistic and tell you that nothing tops Dana International and Charlote Perrelli’s Diva to Diva sadly (that’s because it’s clearly a bottom) – but there are still some gems.

The Swedish Melodifestivalen Eurovision selection process is always chock-full of talent and John Lundvik proved to be the performer that prevailed. His song Too Late for Love is an uplifting number that opts for pop conventionality instead of the nation’s usual synth/electropop stylings chosen by entrees in recent years. It’s no Lina Hedlund’s Victorious, but we like this one.

The return of Sergey Lazarev (who finished third in the 2016 contest in Stockholm) is an exciting thing for Eurovision fans. Whilst Scream is certainly tackling different sonic territory to Sergey’s previous high-octane Eurobop ‘You Are the Only One’ – the dramatic ballad and beautiful Sergey will undoubtedly be an impressive stand out in Tel Aviv.

Blending operatic vocals and pop production may not have been enough to lead to Malena Ernman’s victory in 2009 with La Voix (Still a bop), but Australia’s Kate Miller-Heidke is hoping to succeed where Malena never did. With impressive staging and slick pop production, Zero Gravity may shine and hopefully help us get over our Commonwealth siblings not selecting Courtney Act.


This pop number from Germany sees Laura Spinelli and Carlotta Truman (not actual sisters), deliver an anthem about Sisterhood under the title Sisters and the artist name S!sters, despite not actually being sisters. Sisterhood. Sisters. Sissy that walk. System overload.


Prime piece of Eurovision eyecandy Lithuanian Jurijus delivers a rousing pop number Running With The Lions. The track has a mellow electro undercurrent running through it and this paired with an emotive performance from Jurijus makes it one of our favourites.


We love a country-tinged folk pop and on Eurovision – a night filled with sparkle, synths and excess, sometimes a little stripped back number shines through. Carousel’s That Night may be the track to do so.


Keeping with their tradition of sending twinks with cute funky pop numbers, The Czech Republic’s entry, Lake Malawi’s Friend of a Friend, feels like a natural successor to Mikolas Josef’s Lie to Me.

Irish The Voice star Sarah McTernan delivers a sweet-natured little pop gem with 22. It’s a contemporary number that allows McTernan’s voice and personality to shine through – this one may need some impressive staging to help it stand out from being swallowed up in the Semi-Finals though.


Azerbaijan have swayed us with some Eurovision eyecandy in the form of Chingiz who delivers attitude filled pop number Truth. The synth-heavy number comes packed with a earworm of a chorus and smooth vocals from its sultry performer. We’re sold.

Greece have always been good at giving us entries mixing sultry pop stylings with traditional Greek sounds, but Katerine Duska’s sounds like their most mainstream entry in a while. This Jess Glynne soundalike track may be safe and pleasant enough to perform well on the night.

This scandipop gem shouldn’t be confused with the sixties Norman Greenbaum track, instead this is an icy piece of Scandinavian pop. Handsome Norwegians, a rising chorus and some Norwegian language interludes (that do go a little overboard) ensure this is one of the most fun entries hitting Tel Aviv.

Eleni Foureira left big shoes to fill with the Cypriot entry last year (maybe, we don’t actually know her foot size), and Tamta has taken on the challenge. We’re ready for the chorus drop live – we expect ethnic dancing and pyrotechnics.

Artist: Luca Hanni
Song: She Got Me

Luca Hanni’s sexy R&B-tinged pop jam, She Got Me, could do well if the singer channels the same charisma live as he does in Swiss entry’s smooth music video. And we’re ready for the onslaught of GIFs of Luca’s dance breakdown.


Duncan Laurence’s understated Arcade may be a surprise hit due to the abundance of upbeat numbers in this year’s contest. It’s a charming, heartfelt number – emotively delivered by Laurence.