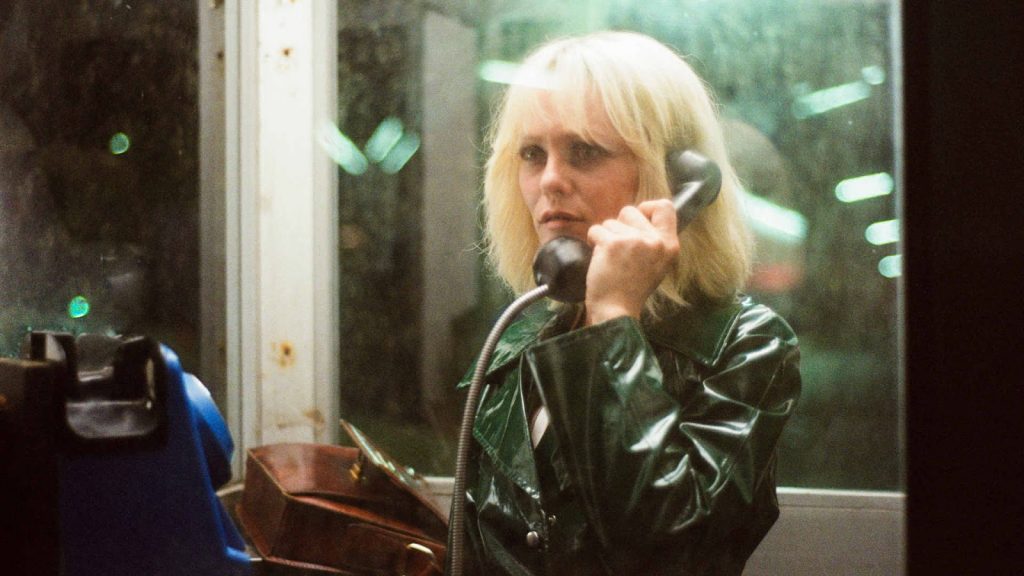 Gonzales sets the film’s distinct tone from its opening moments with the pulsating neon lights of a gay nightclub, intercut with scenes from Parèze’s most recent hardcore flick – it is shortly after that the film’s lead is escorted away from said club by a man clad in black leather mask (complete with curled wig) and brutally murdered by a razor-tipped dildo. From its onset, Knife + Heart asserts itself as a balshy and provocative piece of cinema – blending together gorgeous giallo stylings with lashings of camp. Yet Gonzales shows his skills as a filmmaker by ensuring that Knife + Heart remains an enigmatic and tightly-wound piece of cult cinema throughout its full runtime.

Gonzales and cinematographer Simon Beaufils, create a stylistic tour de force. From the previously mentioned underground neon canvas, Knife + Heart dips into the nightmares of its haunted protagonist which deliver oozings of Lynchian horror – black and white images of burning men, paired with a haunting score will be engrained in your psyche. Yet Gonzales isn’t afraid to pair this with camp imagery – the murders have a giallo silliness, whilst the porn scenes reach excessive levels of camp (queue the title scene for Parèze’s film, Homo Cidal). Yet there are also moments of beauty in these sequences – such as a murder in a rain-drenched forest is brimming with an atmospheric picturesque quality. This mix of beauty, kitsch and tension guarantees Gonzales’ film as an instant cult favourite.

Knife + Heart pairs these intense visuals, with similarly impressive character development. Paradis’ haunted protagonist is skilfully explored by the star with her own heartbreak almost numbing her from the continual tragedies that befall her film set. Paradis captures an intriguing blend of personal vulnerability, yet a slowly developing moral conscience as she gets drawn into the hunt for the serial killer. She’s somewhat cold and distant, but undeniably engaging and sympathetic. Sauvage’s Félix Maritaud adds to the titillating sex appeal of the film as Thierry, one of Anne’s regular stars.

Knife + Heart is a thrilling piece of cinema dripping with an abundance of style, a stirring synth score from M83, taut suspenseful direction, and a sublime lead performance from Paradis.