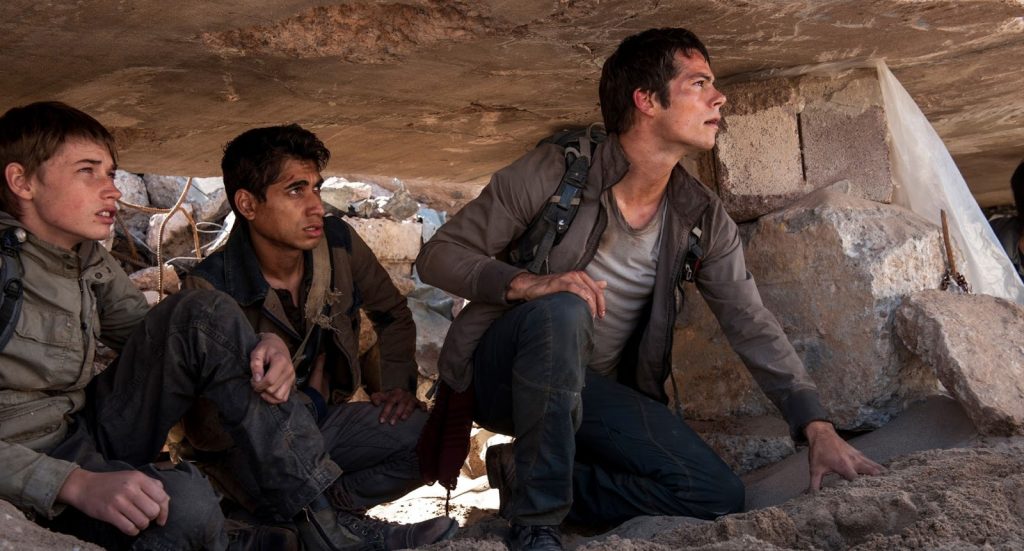 The first cinematic outing for James Dashner’s successful young adult novel series, The Maze Runner, proved to be a surprise hit in a time when YA adaptations were rarely hitting the spot. Less than a year on from that claustrophobic little thrill ride comes the sequel, Maze Runner: The Scorch Trials, with Wes Ball returning to direct. The nifty concept of the first makes way for a sluggishly paced affair that trips under the weight of its countless genre clichés.

After escaping the maze of the first film, Thomas (Dylan O’Brien) and the Gladers find themselves taken to a mysterious bunker run by Janson (Aidan Gillen). Soon they discover Janson’s intentions and cross desert wasteland, The Scorch, in the hoping of joining a rebel group to take on their former captors.

The Maze Runner hit the ground running boasting a refreshingly dark tone, ambitious action spectacle, and a enigma-filled plot. The Scorch Trials retains some of these elements – there are elements of (dull) horror in the form of a zombie virus, and some competently shot action scenes which only slightly quicken the pulse. However in The Scorch Trial’s attempt to make the scope of this sequel far bigger, the claustrophobic originality of the first film is non-existent. Instead, we’re left with a plot that reaches too far yet ultimately manages to grab hold of nothing.

Opening in a dystopian bunker which feels like a loose rip-off of The Hunger Games: Mockingjay Part 1’s District 13 setting, The Scorch Trials establishes this sense of over-familiarity which continues to course throughout the proceedings. As the events of T.S. Nowlin’s screenplay move outside the bunker, we’re left with the familiar tale of rebels attempting to tackle the dystopian totalitarians – who take the form of the wasted Patricia Clarkson and an accent-challenged Aidan Gillen. Here plot strands are thrown all over the place with lightly implied love triangles, confusing narrative history (Thomas seems to have existing connections with many of the rebels?), and marginal plot advancement drifting through the sprawling 131 minute run-time – which sadly finds no time to build on the character development of the first picture.

Ball’s film takes the mantle of a survival horror for the most part as the Maze escapees make their way through The Scorch – a desert wasteland featuring crushed skyscrapers and many a zombie. The action becomes mostly chase centred with quick-cuts and a couple of jump scares, but ultimately feels like a tamer version of everything we’ve seen in every other post-apocalyptic survival flick. There’s one stand-out scene which sees Thomas and rebel love-interest Brenda (Rosa Salazar) scale a diagonally collapsed skyscraper whilst evading zombies and cracking glass. However, this is a case of too little too late and momentum crashes as The Scorch Trials builds to its lifeless sequel-baiting finale.

Maze Runner: The Scorch Trials is a tedious sequel that lacks the imagination and atmosphere of its predecessor. It instead rests on becoming an unsatisfying amalgamation of survival-horror and young adult clichés.