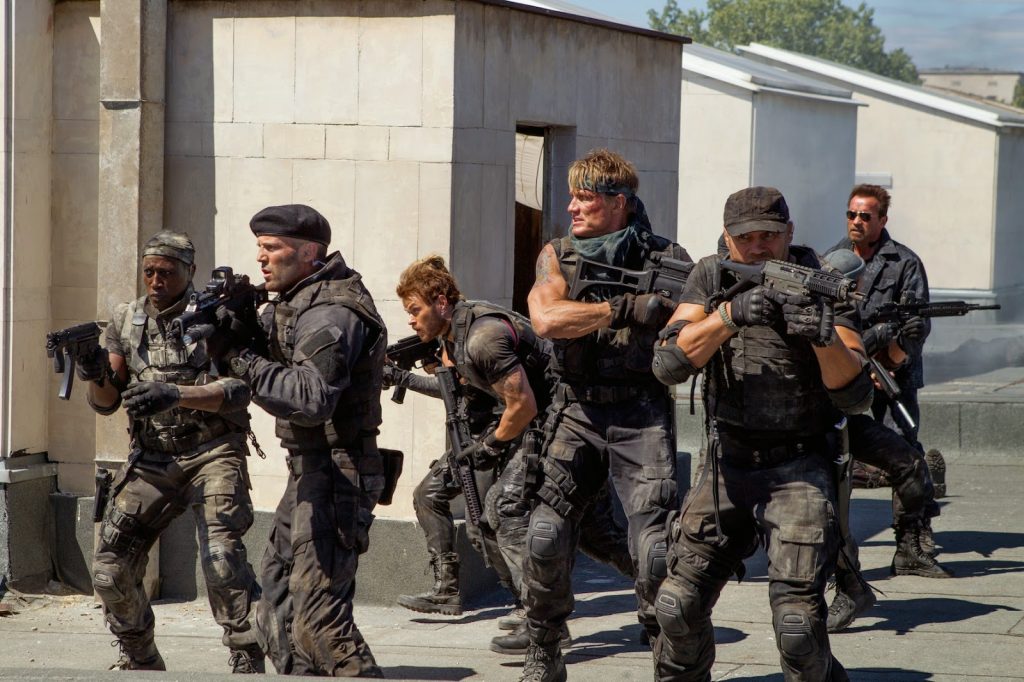 As a proud fan of The Expendables series and the stars that headline it, I was hugely excited for the third outing. Relishing every titbit of news on the project it appeared that The Expendables 3 was going to be bigger and better than the previous outings with a fresh young director – Patrick Hughes – and some legendary additions to the cast like Harrison Ford, Mel Gibson and Wesley Snipes. Unfortunately after my much-anticipated viewing, I left the theatre annoyed and disappointed at this limp note in what had been a terrifically entertaining series.

The Expendables 3 once again follows Barney Ross (Sylvester Stallone) who recruits a young crew to help him take down former -Expendable turned vicious arms dealer Conrad Stonebanks (Mel Gibson) – thus putting his regular crew to the side. However when matters get out of hand and the new recruits get kidnapped Barney calls on his old friends to stop Stonebanks for good.

It was hoped that fresh blooded director Patrick Hughes – the man behind sensational Australian western Red Hill would provide a gritty new take on the series, but alas this is not achieved. Instead of grit and blood-soaked action, what we get is an over-polished, CGI-packed and ultimately tired chapter in the series. Lowered to a 12A rating, the bloodshed has no realism or stakes and there is a stilted lack of atmosphere and tension. The previous outings had been clunky, rickety and most importantly, fun, homages to these action titan’s hits of yesteryear – complete with a warm atmosphere and earnest likeability. The Expendables 3 is lacking in all of these areas.

This glossy, streamlined affair spends much of its narrative rounding up its new young stars. Barney and old friend Bonaparte (Kelsey Grammer) hunt down Smilee (Kellan Lutz) and Luna (Ronda Rousey) – both bringing a welcome sex-appeal to the series – as well as less characterised additions Mars (Victor Oritz) and Thorn (Glen Powell). In doing so, much of the series favourites like Statham and Lundgren are sadly cast aside for much of the narrative – resulting in this film essentially feeling like Stallone’s attempt to keep up with the action stars of tomorrow. This new style is far less fun and results in an awkward, stilted atmosphere for the most part.

There is a general sense that no one seems to be enjoying this much anymore and the novelty of The Expendables has worn off. The bonding between the usual characters feels flat and tonally awkward – there is much less of the usual Barney-Christmas banter, less of Dolph Lundgren’s borderline psychotic Gunner and Terry Crews is near-completely out the picture. Even new recruit Harrison Ford already seems bored, with the actor delivering his lines in a passive aggressive monotone – most amusingly when he notes ‘This is the most fun I’ve had in years’ – well Harrison, maybe tell your face that.

The larger action scenes occasionally quicken the pulse. The film’s opening follows the rescue of Wesley Snipes’s Doc (who is one of the few cast members who genuinely appears to be having a ball) aboard a high speed train, which is rather entertaining stuff. Similarly the last thirty half-hour is one of the redeeming factors where we get to see the full-crew in action – battling it out in a crumbling urban flat-block within a ruined town.

However, even this moderately entertaining conclusion pales in comparison to the all-guns-blazing chaos of the second film’s finale (directed by action veteran Simon West). Dream fanboy moments like seeing Arnold Schwarzenegger and Bruce Willis driving through an airport, firing bullets from a tiny smart car; Chuck Norris blasting a goon through an airport scanner; and that tense final battle between JCVD and Sly – all shine as fond memories from The Expendables 3’s predecessor – but there is nothing that comes close to these moments of action gold here. Perhaps only seeing Harrison Ford’s arrival on the battlefield – albeit stuck behind the control panel of a helicopter.

Fortunately, there is a buzz seeing Wesley Snipes back on screen – he brings a likeable madness to the proceedings. As does Mel Gibson who has a few moments of thoroughly enjoyable scene chewing – despite this, the final battle between he and Sly is short and forgettable. Antonio Banderas leans more towards annoying as awkward comic relief character Galgo. Jet Li (who may as well not be here), Jason Statham, Dolph Lundgren, Randy Couture and Terry Crews are squandered. Schwarzenegger remains a welcome screen presence, but the series is getting frustrating by failing to utilise him in more than a five minute cameo.

Jean-Claude Van Damme recently said that he would love to come back to the series and play former baddie Jean Vilain’s good twin – after all he relished every moment of screen-time in The Expendables 2. This fun, tongue-in-cheek approach might be exactly what the series needs to get back on track – embracing the old-fashioned, blood-soaked fun and silliness that it was meant to. This over-serious, streamlined affair only results in a stilted, tiresome watch that fails to deliver the gung-ho chaos that fans want. Someone call Jean-Claude, Chuck, Bruce and Simon West up for number four.