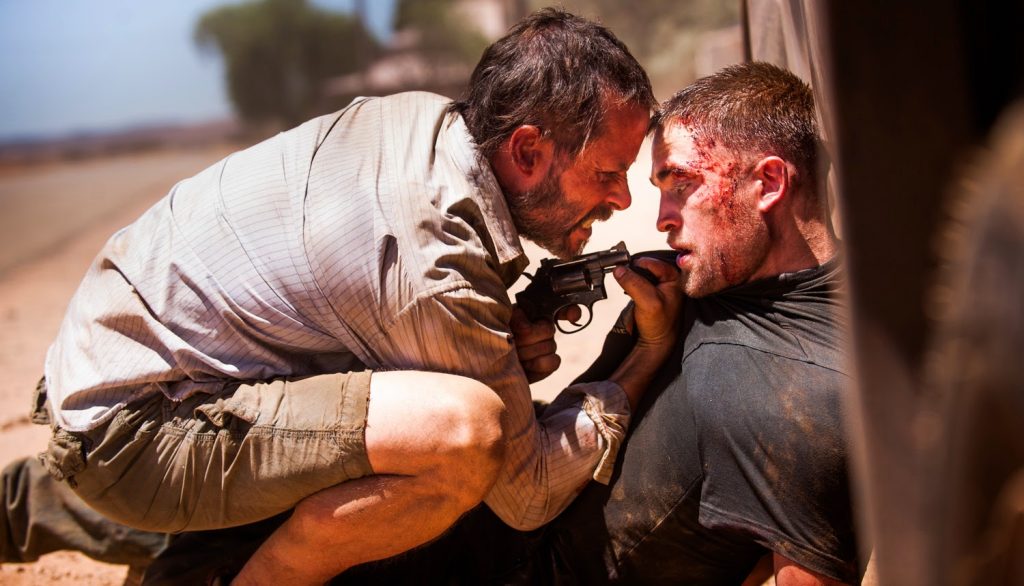 From its publicity materials, The Rover may look like a gun-toting action-thriller – but anyone familiar with its director David Michôd’s prior film Animal Kingdom will know it is not going to be a simple shoot ’em up in the desert.

Set ten years after a global economic collapse, Guy Pearce plays Eric, a quiet loner who goes on the hunt for the men who stole his car. Stalking them through the desolate Australian desert he captures the thief’s younger brother (Robert Pattinson) – with the two forming an unlikely bond on their journey.

The suggestion of a post-economic collapse Australia may evoke images of the Mad Max films to some viewers – and cinematographer Natasha Braier captures a similarly bleak quality in the scorched and desolate landscape. There is also a subtle visual beauty in The Rover’s aesthetic with Braier presenting an almost mythical quality in the dusky barren setting – the perfect canvas for this esoteric tale of revenge and brutal justice to unfold.

This mysticism rears its head again in the film’s loose narrative. The central plot of The Rover is a basic one: the loner’s car is stolen and he is coming to get it back. By presenting solely that, it means that we get little context regarding this intriguing sounding collapse and the near post-apocalyptic quality of life throughout the world. None of this is explored and The Rover finishes with a lot of lost potential.

Michôd’s film is also frustratingly uneven at points – drifting between gripping and tedious, The Rover never truly hooks us in. This is disappointing as the film presents plenty of tense, briefly immersive moments – like when we see Pearce’s character stalk the thieves along a motorway or when he interrogates the staff of an almost Jodorowskean whorehouse (complete with a dwarf). The arrival of Robert Pattinson’s Rey marks a strong shift in tone and much of the suspense and tension built in The Rover is lost as Michôd focuses on building the relationship between the unlikely pair which is never interesting enough to fully grip and maintain our attention.

Pearce’s performance packs several punches. This near-silent loner may look calm initially – but the actor conveys a real burning rage and anger in the character as he hunts for his car. Pearce allows for several surprising moments of kindness and vulnerability to slip through as the loner teams up with Pattinson’s odd Rey. Rey is an strange character to pin down – a twenty-something forced to adapt to this new way of life in a collapsed world. There is a slightly interesting childlike innocence to Rey – but this is a character that does not particularly evoke much interest or emotion (especially when we have seen Pattinson give far superior performances). It is Pearce’s central turn that keeps us intrigued – especially in the surprisingly poignant final scene of The Rover.

The stark beauty in The Rover’s aesthetic remains interesting when the simple, unfocussed narrative of the film does not always grip our attention. However, there are several moments of well executed tension and an impressively layered performance from Guy Pearce that makes The Rover worth recommending.

★★★
Also featured on The People’s Movies.