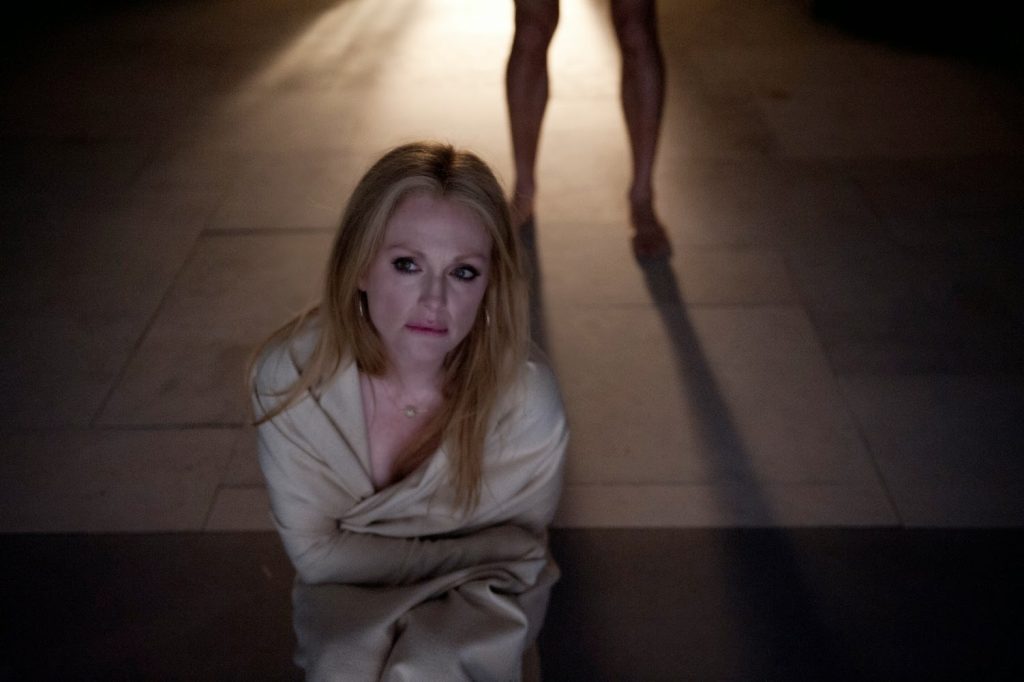 Edging even further from the classic body-horrors which shaped his career, David Cronenberg’s latest feature, Map to the Stars, sees him launch a darkly satirical, dream-like take on the seedy underbelly of Hollywood.

Bruce Wagner’s screenplay follows several loosely connected Hollywood fables. One of such details the darkness haunting the Weiss family: headed by self-help guru Stafford (John Cusack), his wife a tough-talking ‘Hollywood Mom’ (Olivia Williams) and their thirteen year old megastar son (Evan Bird) who has just completed a stint in rehab. Meanwhile former-star Havana Seagrand (Julianne Moore) desperately attempts to relaunch her career trying to land the lead in a biopic of her deceased mother. A visit from a reformed-pyromaniac (Mia Wasikowska) only causes more trouble for these Hollywood residents, bringing several dark secrets to the forefront of their lives.

Whilst still quite some distance from his more mainstream works, Map to the Stars is fortunately far more accessible and entertaining than Cronenberg’s po-faced Cosmopolis. Wagner fills his screenplay with a highly satirical edge exploring much of the depravity and dirty-doings indulged by those selling their souls for a slice of fame. Cronenberg presents these dark secrets as physical ghosts from their pasts: Havana is haunted by her dead mother who continually reminds her of how much of hack she is, whilst thirteen year old Benjie is plagued by hallucinations of a ‘Make a Wish’ foundation fan that he lied to – this approach allows Cronenberg to direct with a dread-filled, nightmare-like Mullholland Drive style, whilst further crafting this dark tone with blackly comic moments of Hollywood vulgarity.

A completely game cast playing Wagner’s wonderfully depraved batch of characters ensure that Map to the Stars is always a bold, uncompromising watch. The shining beacon of Cronenberg’s latest is the ever-exceptional Julianne Moore as the insecure star being dragged to the fringes of the B-List. Moore showcases the effects that celebrity obsession and Hollywood life have on fracturing the star, with the performer losing much of her humanity in pursuit of an unachievable greatness. The best example of this is a terrifically bleak comic scene which sees Havana discover her main competition for a role has withdrawn following the death of her son, which is followed by the desperate actress dancing and singing in manic delight.

John Cusack returns to the top of his game here as a self-help guru whose life is in need of more help than his patients. Whilst Olivia Williams shines as his wife devoted to serving their vile son/cash-cow Benjie. Supporting turns from an excellent Robert Pattinson as the chauffeur who gets dragged into the depravity, a welcome Carrie Fisher, and Mia Wasikowska’s unsettled pyromaniac all add further garish appeal to the seedy Hollywood of Map to the Stars.

This dark, highly-satirical narrative combined with bold surrealist direction makes Map to the Stars one of Cronenberg’s most refreshing and uncompromisingly original features in recent years. A magnificent performance from Moore and exceptional supporting appearances makes this sinister tale of Hollywood depravity, ghosts, pyromania and incest a must see.

Also featured on The People’s Movies. Check it out!