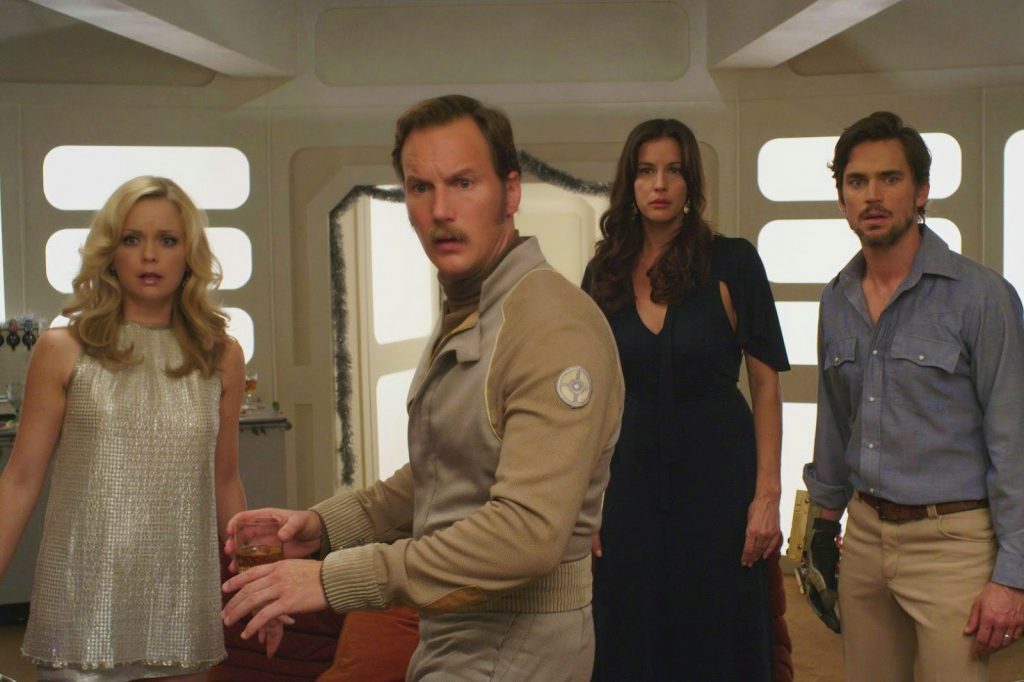 If like me you are fed up with the glossy, pristine world of modern science-fiction: with its slick gadgetry and CGI-heavy visuals, then Space Station 76 is a welcome treat. This feature length debut from Jack Plotnick presents a vision of the future 1970’s style alongside some dark black comedy and suprisingly poignant drama.

Plotnick presents a vision of the future where VHS tapes, cigarette lighters, and flared trousers are still all the rage; where robots are refreshingly basic and poorly designed, and crew members grow cannabis in ship’s gardens. As you can tell, there is a lot of fun to be found in the narrative and the screenwriters fully embrace the camp and humour within it. Paired with a soundtrack filled with seventies classics like Mother of Pearl’s Carmen, Wear Your Red Dress Tonight and Neil Sedaka’s Laughter in the Rain there is a real charming aesthetic and tone to enjoy here.

You might think that there is only so far you can stretch the kitsch nostalgia of Space Station 76, which is true, and fortunately the writers are well aware of this. There is some gorgeously pitched drama and delicate character development to savour here. The various character tropes of the space opera are fleshed out and given a welcome humanity and emotional backbone. Thanks to a game cast who play all the proceedings out with a straight-face, their is an equal sense of dramatic gravitas and hilarity in the deadpan comedy to be found here.

Patrick Wilson excels as the hyper-masculine (just look at that tash) Captain repressing his true identity bringing a ‘straight-face’ and excellent comic timing to the fold. Liv Tyler shines as the well-intentioned second in command, carrying some of the film’s most heartfelt moments with ease. Matt Bomer is equally wonderful as the tight-vest-clad engineer bringing some further eye-candy and comedy to the proceedings.

Space Station 76 is a real treat. Fully embracing the fun of its kitsch concept, Plotnick and co. bring plenty of laughs to the fold, as well as some surprisingly poignant moments of drama.

Space Station 76 is out now.