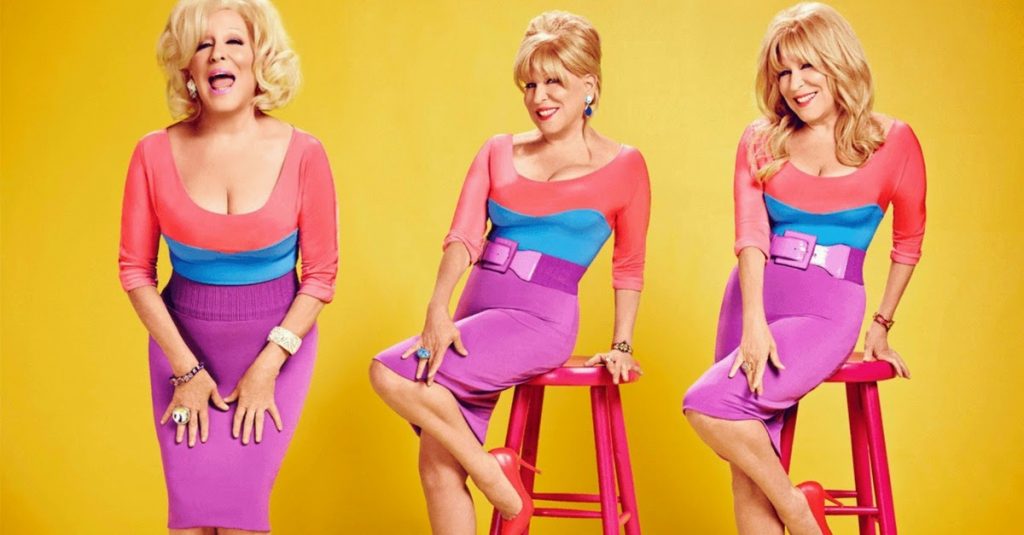 Bette Midler makes a triumphant return to the music world with the joyous and unsurprisingly camp It’s The Girls! – an album which sees her take on some of her favourite female vocal group classics.

The Divine Miss M is no stranger to cover albums with her last batch of studio releases (Sings the Rosemary Clooney Songbook, Sings the Peggy Lee Songbook, and festive romp Cool Yule) all being comprised of various cover tracks. As Midler ventured down cover territory her albums subsequently became less interesting, and sadly less fun – losing her trademark buoyant personality and gutsy, theatrical vocal delivery of her earlier successes like No Frills and Some People’s Lives. Fortunately for her fans, It’s The Girls!, her first studio release in eight years is unmistakably Bette – packed with feel good, sassy charm, and even the occasional poignant moment.

Opening with Midler’s faithful cover of The Ronettes’ Be My Baby, we are immediately transported back to the early sixties and given a taster of the nostalgically charming set to expect. The energy subsequently raises with the actress-singer’s take on The Chiffons’ One Fine Day – with Midler making the soaring, upbeat sixties pop ditty truly her own. Complete with an infectiously buoyant backing chorus of joyous shoobie doo waahs, it is clear that this is a performer back in her element. Midler takes us on a further dip back in time with her take on Bei Mir Bist du Schön – a track popularised by The Andrews Sisters in 1938. Whilst there is a slinky charm to the Midler’s version, it fails to stand out against the brimming energy of the album’s other tracks.


It’s The Girls! veers back on track with a gentle, piano-lead version of The Shirelles’ favourite Baby It’s You where Midler’s sumptuous and heartfelt vocals shine against the effectively sparse production. The end result is a cover of effortless beauty with Midler sounding gorgeously unforced and natural on this version of a timeless classic. The pace picks up with Midler’s take on The Exciter’s Tell Him where the singer and her backing vocalists form their own feisty vocal trio. However, it is Midler’s collaboration with Darlene Love – whose deep vocal registry gels seamlessly with Midler’s higher range on He’s Sure The Boy I Love. When the performers meet on a chorus of ‘When he holds me tight…’. there is an undeniable moment of sheer euphoric nostalgia.

Further pleasure comes from a simple, yet very welcome rendition of The Chordettes’ Mr. Sandman and a version of The Marvelettes’ upbeat, doo-wopping Too Many Fish in the Sea. A mellow, swooning take on The DeCastro Sisters’ Teach Me Tonight proves to be an unexpected highlight with Midler’s sultry vocals shining against slinky trumpet lead-instrumentation. This builds to It’s The Girls!’ real heartbreaker – a stripped back rendition of TLC’s Waterfalls – which is given further poignancy as Midler’s unforced vocals blend with simple piano instrumentation.


A country update of The Supremes’ You Can’t Hurry Love adds some variety to the set and ultimately leads it to stand as an immediate album favourite. Midler also proves to be a safe pair of hands (or lungs) for an expectedly charming take on The Shirelles’ Will You Still Love Me Tomorrow which subsequently follows.

On one of the final tracks of It’s The Girls – an update of The Shagri-La’s Give Him a Great Big Kiss, we see Midler bring back some of the welcome sass and fun that were missing from the vocal diva’s Clooney and Lee cover albums. The singer’s ad-libbing about the hunk in question in the track “He’s ninety-eight you know. I’ve known him since the first time this record came out,” sums up the camp, feel-good and fun-loving Bette that has been missed in recent-years.


It’s The Girls! is one of the musical highlights of the years. It is rare to find an album as joyously charming, effortlessly poignant, and energetically performed as this.