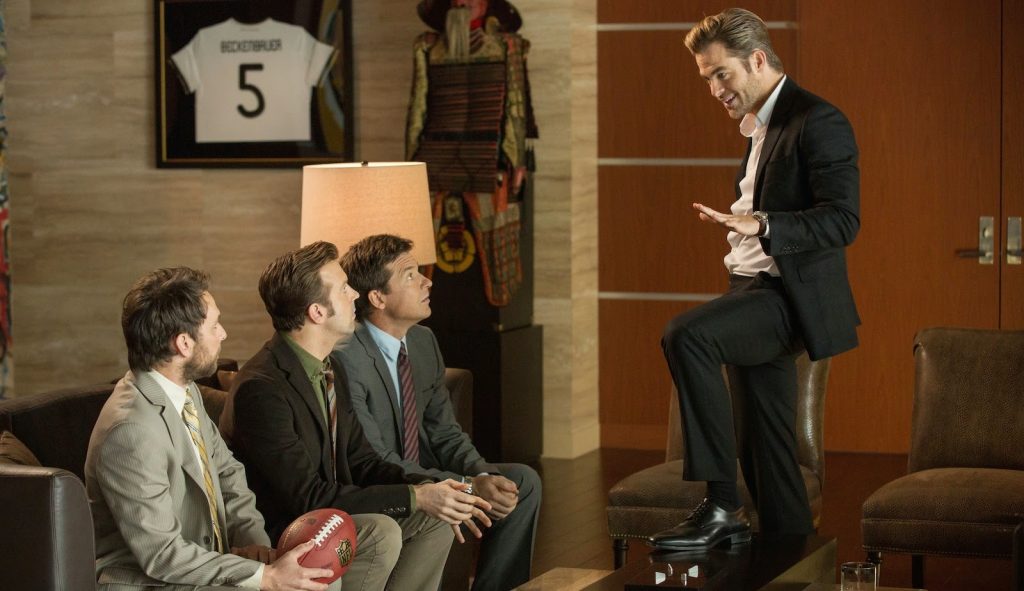 With R-Rated comedies continuing to thrive at the box office it is no surprise that New Line were quick to jump onboard for a sequel to 2011 hit Horrible Bosses. With Jason Bateman, Jason Sudekis, and Charlie Day all returning, this sequel does not deviate far from the formula of the first but provides some modest and predictable titters.

After terrible experiences with their previous employers (see Horrible Bosses), Nick (Bateman), Kurt (Sudekis) and Dale (Day) start their own business and promptly sign a deal with a prominent investor Bert Hanson (Christoph Waltz). However, after Hanson scams them, the three men decide to kidnap Bert’s obnoxious son Rex (Chris Pine) with things expectedly not going to plan.

With regards to narrative, Horrible Bosses 2 presents little more than a loose thread to connect its comic set-pieces – many of which will be indistinguishable to those from the first film. Familiarity is key here and director-writer Sean Anders (Sex Drive, That’s My Boy) sticks to the formula of Horrible Bosses: what we get is Day and Sudekis shouting over each other, whilst Bateman plays the condescending straight-man. The chemistry is there between the leads and feels natural enough – it is even a somewhat likeable dynamic. Sadly strong comic dialogue is not present and the humour here never raises above the occasional titter.

Anders has more luck with comic set-pieces and the film’s supporting characters. The opening scene which sees the three hapless businessmen promoting their new product ‘The Shower Buddy’ on a Good Morning breakfast show has a Farrelly Brothers-esque amusingly crudeness, whilst Jennifer Aniston steals scenes as she reprises her role of filthy-mouthed/minded nymphomaniac dentist Julia Harris. A vitriolic cameo from Kevin Spacey and a rant about testicles adds some further fun, whilst on the other end of the respected thespian spectrum poor Christoph Waltz can barely hide his shame from appearing in this.

Chris Pine proves to be the strongest new asset to Horrible Bosses 2 as the spoilt Rex. Pine has an excellent sense of comic timing and brings his natural charisma to the fold in Rex’s smarmy persona. The film’s second act sees a twist to the proceedings where Pine is added to the dynamic, appearing heavily alongside Bateman and co., subsequently keeping the comedy moderately entertaining.

Fans of Horrible Bosses will find some fun in the chaotic banter between the film’s three leads, however it is Pine and Aniston that steal the show. However, much of the humour falls flat, despite the occasional titter and narratively this is too similar to its predecessor to justify recommending fully.