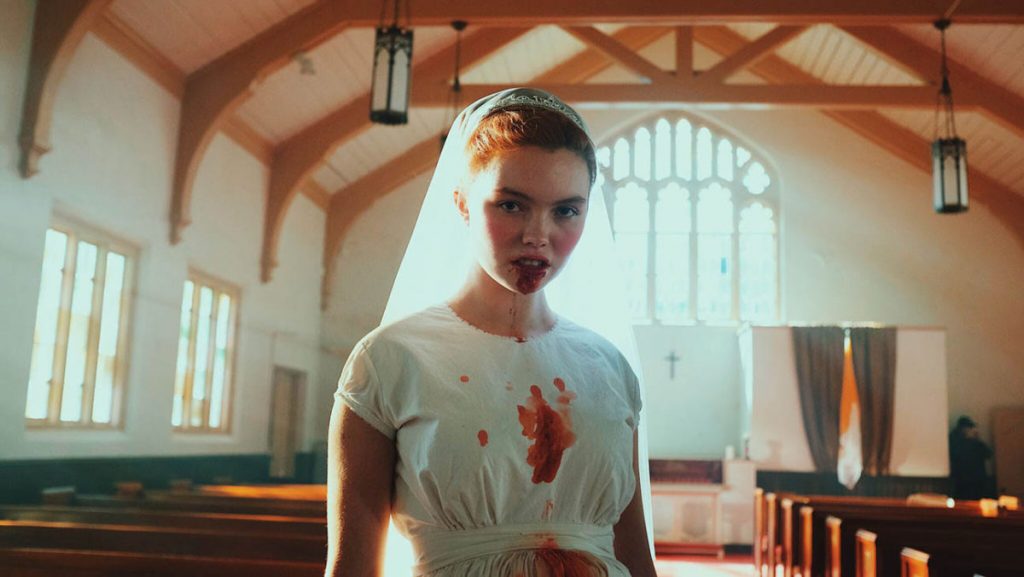 Lucky McKee’s 2011 Jack Ketchum adaptation, The Woman, may not strike you as a film in obvious need of a sequel yet this Pollyanna McIntosh written, directed and starring follow-up proves there is plenty of thematic territory ripe for exploring. This horror takes on the sins of the Catholic Church and the idea of civilising the atavistic outsider with exploitative body horror and outlandish black humour.

After first appearing in 2009’s Offspring, McIntosh’s character returned in The Woman and makes her third appearance in Darlin‘. The project follows the previously titular Woman (McIntosh) and her feral teenager Darlin’ (Lauryn Canny) – the latter of whom is taken to a Catholic hospital and subsequently ‘civilised’ in a church run care home. However, The Woman is determined to be reunited with her vicious progeny.

Whilst there is a familiarity in the core narrative angle of the feral outsider being civilised – of course, with the crux being that those doing the civilising are the real monsters – McIntosh has fun playing with this. Deconstructing and toying with already-plagued representation of the Catholic Church provides an air of originality to Darlin‘. The titular outsider becomes a much-needed PR tool for a lecherous Bishop (Bryan Batt) and his obedient nuns, with the hope that fixing the damaged Darlin’ being a much needed testament to the power of the Holy Spirit. Here the Church is camped up with veteran nuns smacking rulers, Bishops licking their lips with predatory malice and religious reasoning used to justify abhorrent behaviour. It’s exploitative but creates a superbly entertaining enemy for our blood-thirsty antiheroes.

Canny’s performance is excellent as she captures Darlin’s move towards civilisation, whilst McIntosh is entrancing as the savage Woman. There is plenty for genre fans in haunting nightmare scenes (echoes of David Lynch to be found in those) and intense visual effects and gore. There’s fantastic black humour in the Woman’s subplot about joining a group of outsiders stationed in the forest – a mix of those hiding from radio waves, homeless women and prostitutes.


There’s familiarity in its core theme, but McIntosh has fun exploiting with representation of the church and exploring female relationships in this impressively crafted horror.