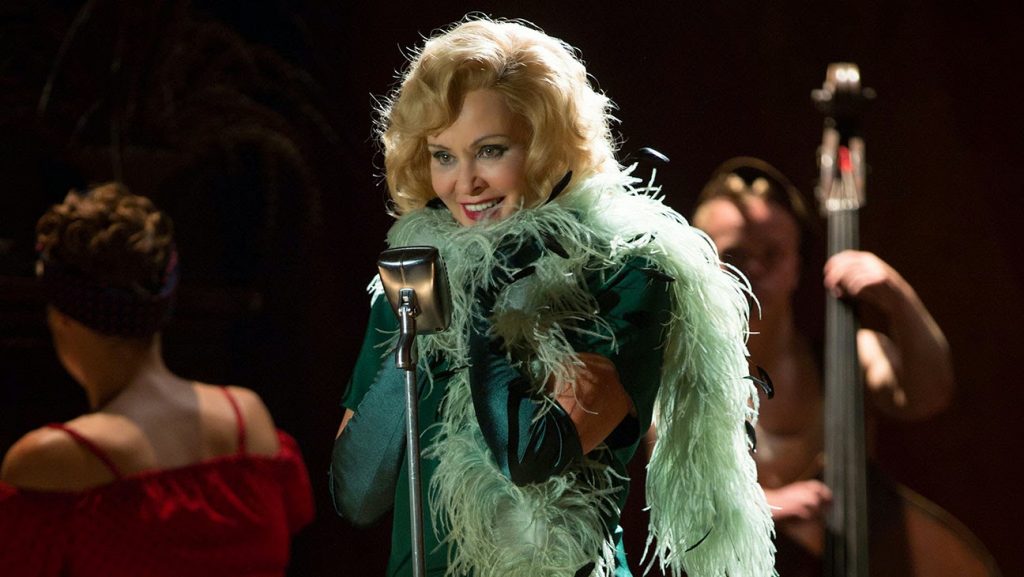 To
claim American Horror Story’s fourth
outing Freak Show is getting a bad
rap would be pretty unjust. The brainchild of Ryan Murphy and Brad Falchuk is
still thriving well past the half-way point of the season with all the gore,
shocks, melodrama, and campy music numbers a boy could dream of. However, I’ve
recently noticed discontent brewing regarding Murphy’s former critical darling
– in the form of articles from both indie blogs and prestigious news outlets
(The Hollywood Reporter, Washington Post) claiming Murphy’s anthology series is
growing ‘out of control’, becoming ‘generic’ and ‘slow-paced and obvious’. As
someone whose televisual highlight of the week is without a doubt, American Horror Story: Freak Show, I
felt compelled to chuck in my two cents and gush over why I think this is a series at its peak.

Perhaps
it is not as bleak as The Walking Dead,
nor as sexually-charged as the recently-departed True Blood, but Freak Show satisfies
my craving for outrageously
fantastical dream-like Gothic horror that made me a genre fan in the first
place. Like so many of the strongest horror films of the fifties and sixties, Freak Show combines bold
character-driven melodrama with psychological chills, joyous Hollywood excess
and camp, stomach-churning gore, a deep underlying melancholy, and a brooding
Gothic madness. The end result feels like a nostalgic trip back to a time when
the ‘horror of the personality’ was at the forefront of the genre – where both
psychological and physical monsters were usually representative as a thinly
veiled attack on middle class superiority and the dark ‘other’ (potentially
lurking inside each of us) that could snatch that comfort from underneath our
feet. This essence, previously found in the likes of Psycho, What Ever Happened To
Baby Jane?, Strait-Jacket, Berserk!, Lady in a Cage, Targets, and Games, is alive and well – and is living
at Elsa Mars’s freak show in Jupiter, Florida.

Much of the criticism that I keep finding myself reading centres on the
familiarity – much of which is centred around Lange’s strong female protagonist
Elsa Mars. Murphy excels at writing powerful  female characters whether it be NeNe Leakes
and Ellen Barkin dominating the screen in short-lived NBC comedy The New Normal or Lange, Kathy Bates,
and Angela Bassett gripping us in the AHS
saga. I’ve read that several reviewers are sick of seeing Lange as the icy, desperate
vamp clinging to her fading glamour in each season – which might not be such a
bad argument. However, with each season, Lange and Murphy pack continual
surprises in each character – keeping her continued appearances fresh and
fantastically exciting. This time as the Marlene Dietrich-inspired would-be
star there is many an underlying weakness lurking in Elsa – but it is watching
her play these titanic characters attempting to suppress any flaws that
continually makes for such an engrossing protagonist – whether it be Murder House’s medling Southern Belle, Asylum’s overpowering Sister Jude,  or Coven’s
fading Supreme. Lange has that classically rare air of natural grace and power
that we see Joan Crawford, Bette Davis, Olivia de Havilland, Barbara Stanwyck,
and Simone Signoret execute in these classic ‘horror of the personality’ films
and contributes an invaluable amount to the continual charm of the series
through this.

The freak
show setting is also proving to be one of the series most engrossing set-ups so
far. As an environment it straddles a line between the darkest recesses of
reality and an unearthly supernatural world, serving as the perfect canvas for
both character-driven tales of woe and horror to unfold – as well as an
unsettlingly lurid landscape for the supernatural to creep in. Gripping human
drama comes in numerous forms from: the inner secrets of Michael Chiklis’
violent strong-man as he battles with his sexuality, Bearded Lady Ethel Darling
(a wonderfully accented Kathy Bates) tackling health problems, and Francis
Conroy’s overbearing maternal figure being crushed under the continual pressure
to cover up psychopathic son Dandy’s crimes. There’s also Machiavellian fun to
be had in Denis O’Hare’s twisted conman intent on harvesting the body-parts of
the world’s most exotic freaks – whilst Patti LaBelle’s gutsy maid has been a
comic joy to watch. However, this is American Horror Story after all and Freak
Show has presented a twisted playground full of the supernatural and
downright horrifying human evil – from Wes Bentley’s two-faced aristocrat
Edward Mordrake (complete with a luminous green fog) come to harvest souls, to
Twisty’s caged prisoners, and Dandy’s Cruising-esque
murder sequence which laid guest star Matt Bomer to rest . These scenes of gore,
shocks, and pure nastiness are all backed up and justified through Murphy’s
rich character-driven narrative – making every death or moment of peril a
near-earth-shattering moment for fans of the show (for example, just remember
your reaction to the adorable Jyote Amge’s Ma Petite almost being poisoned in
the glass jar). The result is a series that is intelligent, unsettling,
poignant, and both visually and thematically rich.

It
would appear that the casual viewer is more offended by the musical numbers
most of all – citing Murphy’s background on Glee
as clouding his judgement. However, I can only disagree with this criticism.
The freak show is carnivalesque, it is lurid, a joyous celebration of the
twisted, weird and wonderful. It is the perfect environment to feature musical
performances – why not combine good old fashioned horror with the musical? It
worked for Sondheim’s Sweeney Todd: The
Demon Barber of Fleet Street. Lange’s Dietrich inspired take on Bowie’s Life on Mars and Lana Del Rey’s Gods and Monsters have been unstoppable tour
de forces of atmospheric camp – both real series highpoints. Sarah Paulson
tacking Fiona Apple’s Criminal was a
pleasant surprise, and I’m sure someone out there was enjoying Evan Peters’
take on that Nirvana track. These numbers are perfectly fitting with the garish
brightness and carnivalesque chaos of Freak
Show – bringing a nostalgic Baby Jane-esque
faux Hollywood glamour to the fold.

We still have several
episodes of American Horror Story: Freak
Show left to relish, but if the series stays as fantastically entertaining
as it has been – then it is likely to claim Asylum’s
title as the highpoint of the show’s run.