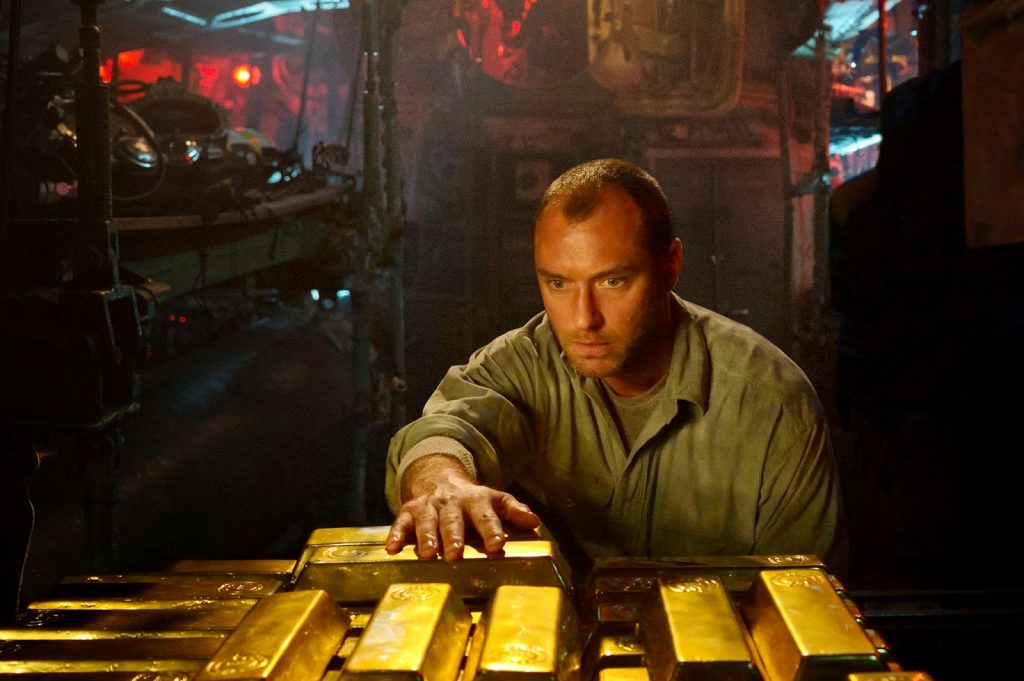 Slipping out with little fanfare this week is Kevin MacDonald’s Black Sea – a submarine thriller with its roots firmly planted in the old-fashioned adventure films of yesteryear.

Black Sea follows submarine captain Robinson (Jude Law) left struggling after being let go by his long-time employers. After hearing rumours of an abandoned submarine filled with unclaimed Nazi gold beneath the Black Sea, Robinson hires a rag-tag crew with the help of a mysterious backer to stake claim to the hidden treasure. However, tensions beneath the ocean reach boiling point as the crew discover their shares increase when another man fails to survive the trip.

MacDonald has crafted a watch that captures the dank atmosphere and infinite darkness that lurks at the bottom of the ocean, and showcases both the psychological and physical implications that this unnatural environment has on the human condition. Part boy’s own adventure and part-marine thriller, MacDonald executes a stirring tension throughout – whether it be from watching hot-headed crew-member Fraser (an excellently unhinged Ben Mendelsohn) spreading paranoia around the vessel, or the perilous task of transporting several tonnes of gold from one submarine to another – Black Sea remains consistently engaging.

This is an old fashioned tale that tackles concepts like the perils of greed (or gold madness), but for those willing to dig slightly deeper into Dennis Kelly’s (TV’s Utopia) narrative, there is a well established social context tackling recession hit Britain and the strain the fragile job-market has on families. With this established from the onset, as gold-crazed greed and madness hits the crew and Captain, their motivations are always empathised and somewhat justifiable. However, Black Sea shines with or without this context simply on the strength of its sturdy narrative and near-mechanically perfect execution from MacDonald.

With cinematographer Christopher Ross, MacDonald channels the gritty atmosphere of bleak submarine pictures like K-19: The Widowmaker and Das Boot through the darkly-lit grey industrial interiors of the vessel. Visuals remain tightly-shot and claustrophobic throughout as this leaking, creaking vehicle shudders its way to the foot of the ocean. Alongside this darkly atmospheric cinematography there is an equally impressive array of multi-faceted performances from Law and supporting players Scoot McNairy, Ben Mendelsohn, Michael Smiley and more – with character motivations always feeling as murky as the waters that surround them.

Executing a masterful tension, grippingly atmospheric old fashioned story-telling, and featuring an array of bold, uncompromised performances Black Sea is a surprise delight of the year.