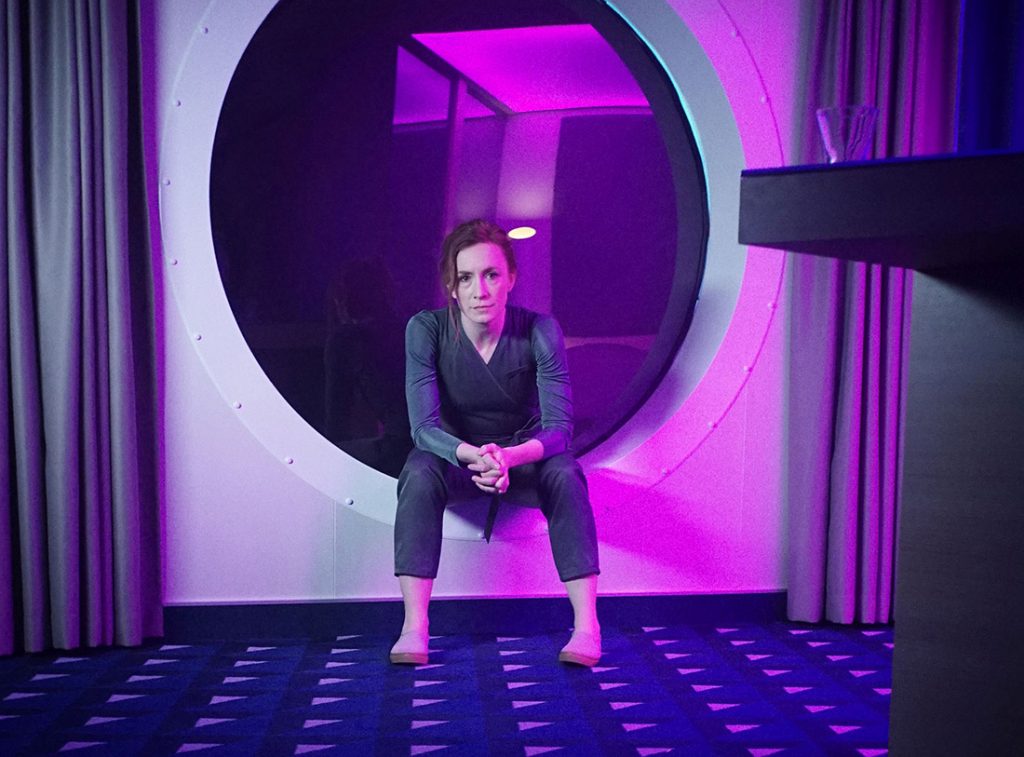 Hard-hitting Swedish space opera Aniara delivers nihilistic horror as it explores the breakdown of societal norms aboard a tragic space voyage. Pella Kågerman and Hugo Lilja write and direct based on a poem from Swedish Nobel Laureate Harry Martinson.

Passengers aboard a sprawling spacecraft headed from a destroyed Earth to a home on Mars are faced with the new horrors when the ship veers off course. With fuel sources depleted and no path in sight, passengers are faced with years of drifting around space. As time progresses, order breaks down – religious zeal, rituals and authoritarian behaviour quickly take over.

There are echoes of seafaring tragedies like The Poseidon Adventure and Titanic in Aniara with a luxurious vessel doomed for disaster. Instead the action takes place in space and production design from Linnéa Pettersson and Maja-Stina Åsberg helps transport us there in a slick, convincing manner. The sets are elegantly constructed beginning as luxurious yet soon becoming haunting scenes of rituals and societal decay.

Kågerman and Lilja captures the destruction of this order with nihilistic terror and dread. Passengers optimism is transformed into frustration and fear with the news the ship is off-course for the foreseeable future with the crew attempting to maintain the real gravity of the situation. A divide between the authority figures and passengers is one shift that establishes early and the filmmakers revel in fracturing societal norms further as years pass. The formation of cults, ritualistic orgies and despairing totalitarian regimes all establish capturing the strains of the human psyche when placed under such pressure and the subsequent establishment of new orders.

This journey is captured in a stellar lead performance from Emelie Jonsson whose protagonist runs an earth simulation experience which becomes a beacon of hope for despairing passengers. A subplot exploring the strain of this simulation and the weight of human suffering delves into humanity’s sometimes fragile relationship and overreliance with technology and disconnect from the real world.

Whilst tonally Aniara is bleak – it makes for a fascinating study on the nature of the human psyche. The tragic space setting provides a unique and claustrophobic setting for this macabre tale of nihilism to unfold upon.