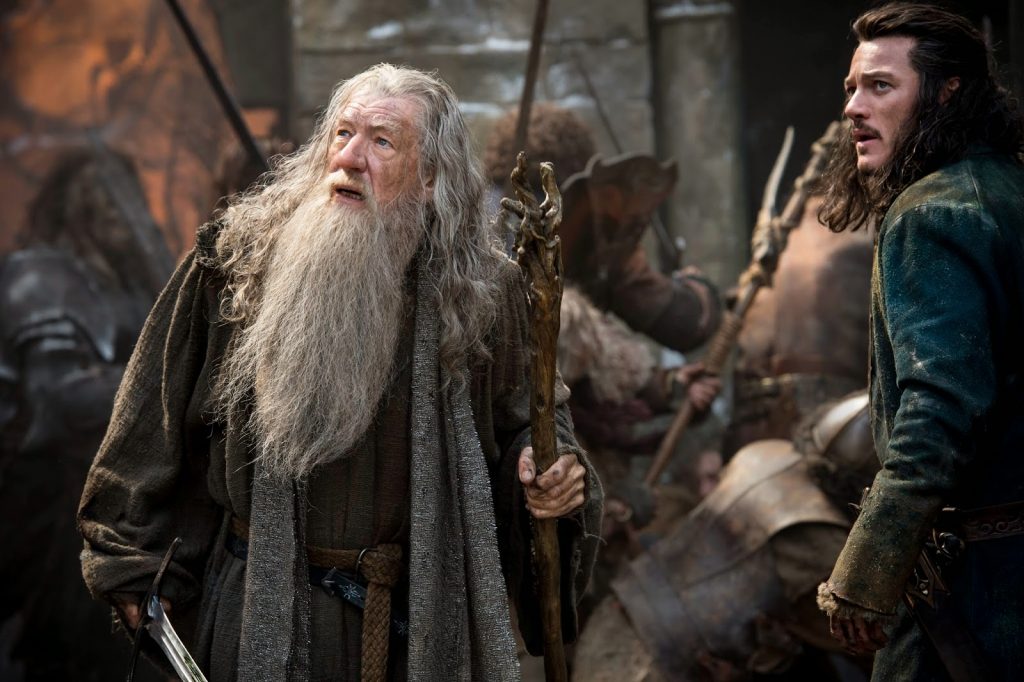 Almost two years to the date that the first chapter in Peter Jackson’s Hobbit saga An Unexpected Journey debuted, the series gives us one last burst of glossy action as it comes to a welcome conclusion. Gone is the exciting concept of a bridging film between The Hobbit and The Lord of the Rings (TLOTR) series, instead switched for an essentially two-hour plus battle sequence.

Picking up where The Desolation of Smaug abruptly ended, we see Bilbo and his dwarf associates as they take on the might of an Orc army who wish to claim the Lonely Mountain and the vast treasures which it holds.

The Battle of the Five Armies gets off to a staggeringly impressive start with a blistering opening showcasing Smaug’s attack on Laketown. The vengeful dragon engulfs the water-logged town in a barrage of flames, with Jackson’s tense, fast-paced direction capturing the intense panic and chaos as the town turns into a fiery blaze. Sadly this is a rare moment of excitement and grit which only lasts all of ten minutes, before the aesthetic gradually returns to the glossy and over-polished style of the previous Hobbit films.

Perhaps this glossiness can be pinned on the film’s higher frame rate which gives it the look of the cheap eighties and early-nineties ITV theatrical adaptations forced on legions of bored British High School children. Without the grime and grit that made TLOTR saga such an absorbing, character-filled visual experience – it is a challenge to invest oneself in a film that has a near identical look to the likes of Transformers: Age of Extinction. This becomes a huge issue when the narrative is largelly comprised of one elongated CGI-heavy battle which becomes tiresome fast. Instead of the frantic, chilling attack on Laketown and the fast-paced barrel race from the prior film, this mass of computer-generated sword-clashing and grunting is hugely unmemorable.

Most of the cast remain decent value. Ian McKellen commands the screen as the wily Gandalf, whilst Lee Pace, Evangeline Lily and Orlando Bloom are engaging additions. Luke Evans remains a convincing action hero, despite Bard’s blandness as a character. There are also welcome returns from Cate Blanchett, Hugo Weaving and Christopher Lee (albeit largely in cameo form) who manage to conjure up some fond memories of their finer moments in TLOTR saga. Martin Freeman remains a little too smug as Bilbo, whilst the multitude of dwarves continue to be more irritating than likeable.

There is a feeling of lost potential here. There are moments which lay the basic groundwork for TLOTR series, like Saruman being corrupted by the evils of Sauron – but these scenes are few and far between. Given the vast narrative time between The Hobbit and TLOTR it seems a waste that the last film in the series is little more than an extended, padded-out battle scene with little closure.

Lacking the grit and grime that this tale deserves, The Hobbit: The Battle of the Five Armies is not the film that fans deserve. Serving as little more than one large action scene, Jackson abandons all potential narrative interest for a few cheap thrills. There are moments of throwaway entertainment value, like seeing Sir Christopher Lee (or his stunt double) taking on an army of ghosts – so I suppose we should be thankful for that at least.