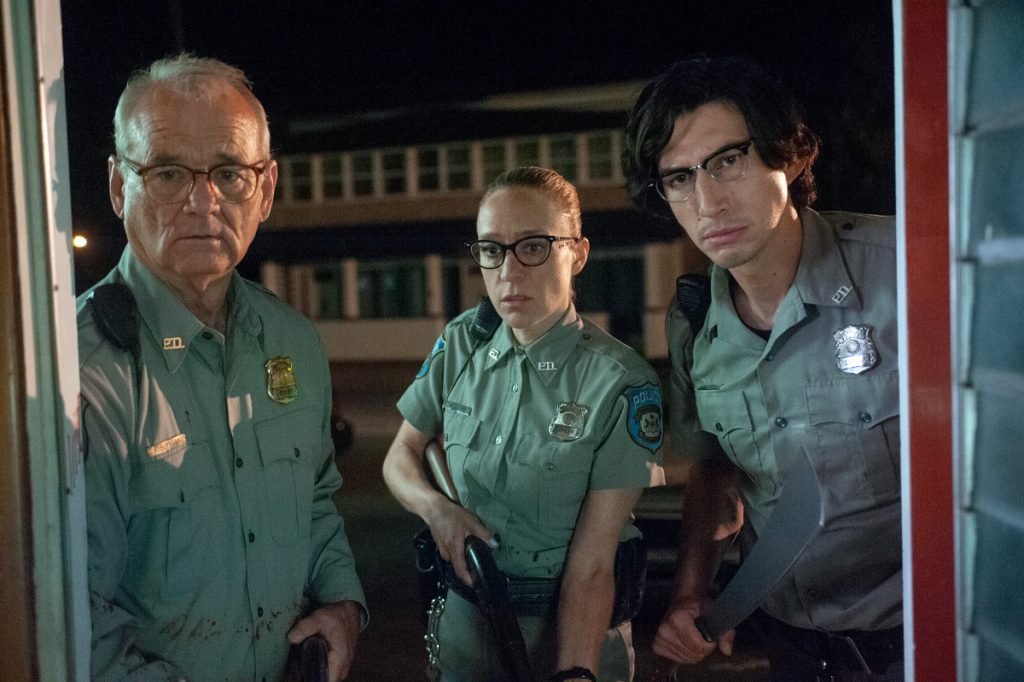 Jim Jarmusch successfully took on vampire mythology in Only Lovers Left Alive – a lush and lethargic exploration of the horror subgenre. He turns his attention to the world of zombies with the help of a range of A-List friends such as Adam Driver, Tilda Swinton and Bill Murray in The Dead Don’t Die.

The inhabitants of Centerville find themselves faced with a zombie uprising with the local police force headed by Chief Robertson (Murray) reluctantly tasked with tackling the undead. Support is on hand from Scottish mortician Zelda Winston (Swinton) and hardware store owner Hank (Danny Glover).

Jarmusch directs the The Dead Don’t Die with a highly satirical eye most notable in fourth wall breaking references to the film’s script and Sturgill Simpson theme song from Adam Driver’s Officer Ronnie. There is the sense that Jarmusch is more focussed on having fun with his cast of friends – something that is infectious and does transfer to the audience to some extent. Yet the lines blur between fun and arrogance with the fourth wall breaking – it can come across as a little smug particularly as ‘self-deprecating’ references to Jarmusch himself begin to creep in.

Yet despite this there is some passion for the genre. The filmmaker takes his time building up the horror and whilst it’s not massively original in doing so – it’s efficiently done. The first two thirds of the film is pure oddball suspense – creeping up the escalating threat until a zombified Iggy Pop makes a trip to a local diner. Tom Waits’ homeless vagabond serves as a somewhat foreboding narrator telling us about the odd behaviour of animals and strange new hours of daylight. Given this drawn out build-up the expectation for quite an impressive, grand scale final act is laid.

Yet this final act comes in the somewhat low key fashion that we would expect from Jarmusch. Yes, we do get to see Swinton slicing through zombies with a samurai sword, Murray and Drive shotgunning the undead, and Glover trying to fend off hordes of flesh-eaters – but none of this is delivered in a way that is as fun as it sounds. It is all quite languidly paced and small scale. There are smiles to be raised at seeing this big name cast having fun in a genre film – but this isn’t quite enough to fully invest us in the proceedings.