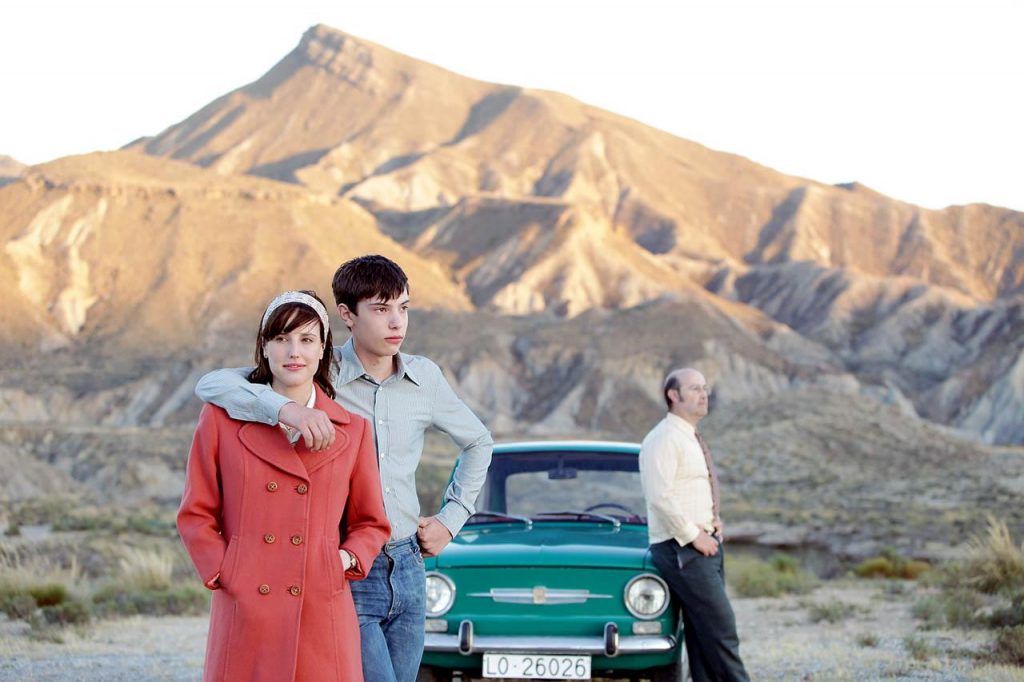 Taking its title from The Beatles song Strawberry Fields Forever, Living is Easy With Eyes Closed plays the Edinburgh International Film Festival’s retrospective Once Upon a Time in Spain. This 2013 film from David Trueba found success at the Goya Awards and at its best it’s a charming, sweet-natured albeit somewhat pedestrian road trip.

In 1966, English teacher Antonio (Javier Cámara) decides to take a trip to Almeria in the hope of meeting John Lennon on a film set. As he begins his roadtrip he meets two hitch-hikers, Juanjo and Belén – each running from their own problems.

Trueba crafts three likeable characters – teacher Antonio driven by his passion for Lennon, pregnant runaway Belen (Natalia de Molina), and teenage Juanjo (Francesc Colomer). There is a pleasant dynamic between the trio with Antonio becoming a mentor to Juanjo, Belen becoming a site of first love for Juanjo. The roadtrip captures the various turning points faced by each our central characters in their lives – providing a form of self-discovery and depiction of the power of new friendships.

Cinematographer Daniel Vilar fills the film with gorgeous scenery which explores the Spanish countryside and compliments the transition centred narrative beautifully. Trueba’s film is calm and levelled without massive stakes driving the narrative – instead it finds its pleasures in exploring the charming dynamic between its three curious characters and their respective and shared journeys.

Yet without great stakes, Living is Easy With Eyes Closed can feel a little throwaway and forgettable. The narrative massively draws us in beyond surface level leaving the performances to do most of the work. Cámara adds a quiet depth and is ultimately the standout of the cast and ultimately delivers a lasting performance.