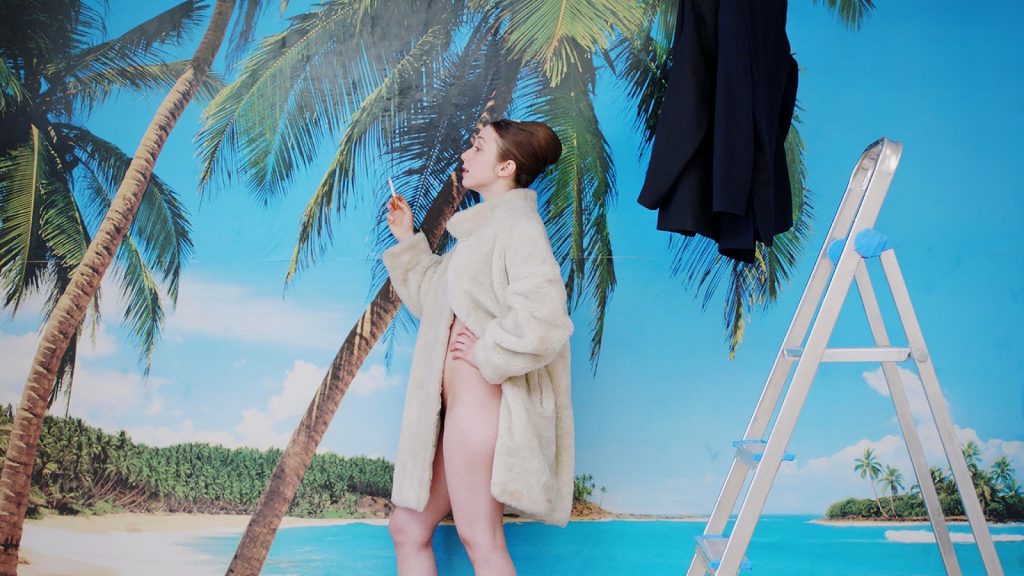 German indie Aren’t You Happy? comes from writer-director Susanne Heinrich who puts contemporary womanhood under the microscope in a playful offbeat manner.

Split into fifteen episodic chapters Marie Rathscheck‘s ennui filled maiden tells us if this was a film about a melancholic girl we would watch her wander around, talk, have sex, and do nothing much else. That’s exactly what happens as the film progresses.

Rathscheck navigates us through these vignettes with a deadpan lethargy from the opening moments when we see her clad in a faux fur coat and smoking a cigarette like a bored Dietrich-esque femme fatale. This demeanour stays constant throughout as our melancholic heroine navigates situations of varying bawdy punk kitsch. This melancholic attitude paired with situations of growing absurdity fills Aren’t You Happy? with a cheeky irony and silliness that fights against established norms and expectations of female life.

Delivering dialogue with a lethargic energy, the melancholic girl’s various episodes see her decide to have a baby to cure her inherent narcissism, have dry spaghetti with a window cleaner, adopt a small dog, wait for the fall of capitalism, talk her psychologist out of seeing her, and engage in some sexual encounters with a carpenter and a poet. This impassive style paired with musings on feminism, motherhood, politics, consumerism, art and sex gives Aren’t You Happy? an anarchic punk feel.

This style paired with aesthetics of kitsch pastel colours gives Heinrich’s film a unique cobbled together style. A breezy jazz band soundtrack furthers the camp atmosphere of Aren’t You Happy? and channels the ironic kitsch of Heinrich’s film. Sometimes this can feel a little too esoteric for its own good with its dense points being lost in the distracting kitsch aesthetics.

The sense of playfulness and anarchist mischief coursing throughout Aren’t You Happy? will be a treat for a certain type of viewer.