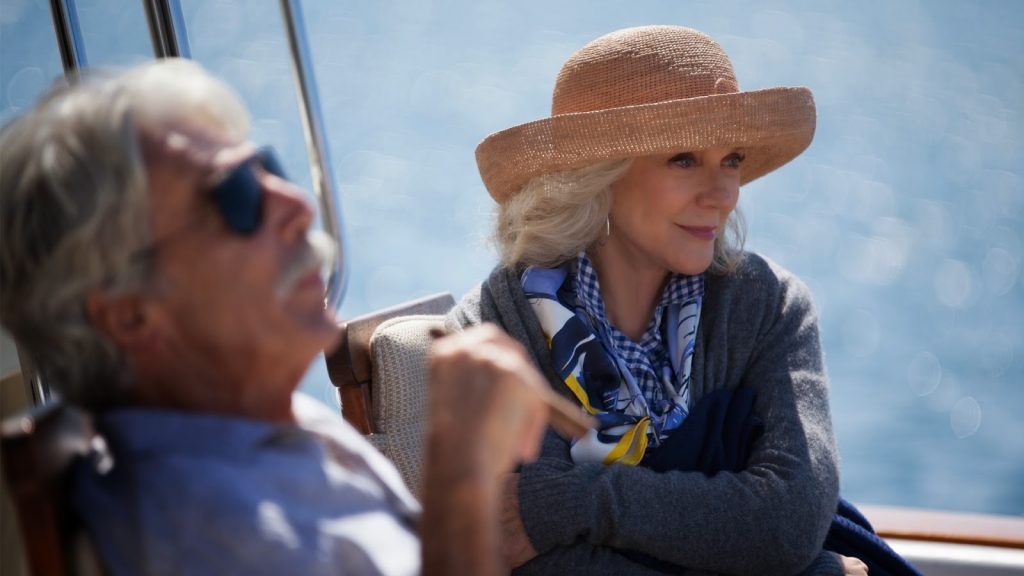 Effortless charming, elegantly directed, and featuring a career best performance from Blythe Danner, Brett Haley’s I’ll See You in My Dreams is a delight packed with heartfelt emotion.

Long-time widow, Carol Peterson (Danner), is uprooted from her regular routine after the death of her beloved pet. Thrust into the dating world Carol balances affections from charming older man Bill (Sam Elliott) and a new-found friendship with her younger pool-boy (Martin Starr).

Packed to the rafters with well-written, authentic-feeling characters, I’ll See You in My Dreams puts older characters at the narrative forefront in a refreshing move. Refusing to make a gimmick or novelty out of the age angle, Haley and co-screenwriter Marc Basch delicately craft amusing, tender protagonists in what is a deeply engaging watch sure to tug at the heartstrings and spur many a laugh.

There is a consistent emotional pulse driving I’ll See You in My Dreams – a film that openly deals with love, loss, and embracing the time that we have with the people we care about. Opening with a soul-crushing sadness as Carol loses her pet dog Hazel (in a scene likely to bring tears to your eyes), we watch the character’s strength as she picks herself up time and time again tackling emotional setbacks with a powerful perseverance. Danner carries so much dramatic weight in what appears to be such a delicate performance – consistently relatable, we feel her discomfort when speed-dating (especially in an amusing STD-driven conversation scene), her gut-wrenching pain at loss, and her joy when building new lasting relationships. Danner is utterly sublime.

There is an elegant poignancy in I’ll See You in My Dreams that strives to avoid clichés in its character relationships. Whilst the potential for a love triangle dynamic between Carol, Bill and pool boy Lloyd certainly exists, Haley and Basch instead choose to embrace the friendship between Carol and Lloyd – capturing a relationship that crosses conventional age boundaries. Seeing Carol find her spark when hanging out with Lloyd is completely heart-warming – best exemplified in an elegantly poignant karaoke scene where Carol tackles ‘Cry Me a River’. Danner’s soothing rendition of the track encapsulates the themes of sadness, loss, and renewed strength that course throughout I’ll See You in My Dreams.

With a charming, breezy California setting, Haley’s film is consistently visually pleasant and warmly atmospheric, whilst continual moments of stand-out comedy ensure this is by no means a sombre affair. A personal high-point sees Carol and her girlfriends played by the equally marvellous Mary Kay Place, Rhea Perlman and divine June Squibb indulge in some medical marijuana. This is followed by an attack of the munchies, a baked supermarket trip, and a riotous encounter with a hunky cop (Veep’s Reid Scott). How could a scene with a stoned June Squibb eating cereal from a box in the middle of downtown California NOT be amusing? Further pitch-perfect turns from Martin Starr and the ever-venerable Sam Elliott ensure this is a consistently well-performed feature.

I’ll See You in My Dreams is a sheer cinematic triumph. Packed with heartfelt emotion, warming humour, and dazzling performances – spearheaded by the sublime Danner – Haley’s film is a sheer treat from start to finish.

★★★★★Also featured on The People’s Movies.