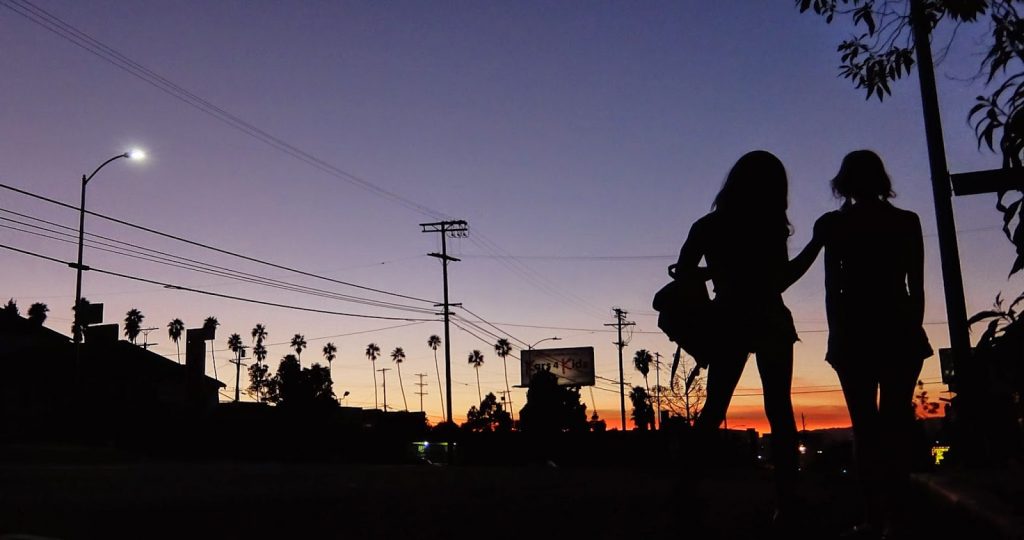 Feeling like a contemporary trash epic in the vein of the work of John Waters and Andy Warhol, Tangerine unfolds on screen with an explosive energy, vivid performances, and a wickedly amusing sense of humour.

Filmed on an iPhone 5s, Tangerine follows two transgender prostitutes, Sin-Dee (Kiki Kitana Rodriguez) and Alexandra (Mya Taylor), as they navigate through downtown Los Angeles in search of the woman who has been sleeping with Sin-Dee’s boyfriend, Chester (James Ransone).

Writer-director Sean Baker directs with a ferocious energy as he captures the scorned-woman Sin-Dee’s frantic anger and desire to settle her score. With a blistering soundtrack comprised of indie dubstep tracks, and photography that captures the garish, bright seediness of downtown Los Angeles, Tangerine is a watch that assaults the senses. Despite being shot on an iPhone with the help of several nifty cinematic apps – Tangerine remains as aesthetically powerful as any release shot on film or digital..

This energy is complimented by powerhouse performances from Kiki Kitana Rodriguez and Mya Taylor. Rodriguez’s Sin-Dee is a tsunami of ferocious vitality as the scorned woman who powers through LA like a steam train. Sin-Dee’s take no prisoners attitude results in some of Tangerine’s most outrageous put-downs and comic set-pieces – like scenes capturing Sin-Dee’s encounter with Chester’s bit on the side, Dinah (Mickey O’Hagan), where the prostitute literally drags her nemesis across town. Taylor is a true revelation here, the more grounded of the pair, Alexandra appears to slightly more in control and grounded – with the capacity to be fierce when necessary.

Whilst Tangerine is continuously amusing thanks to the sass and quick wit of its protagonists, Baker successfully captures the unjust sense of discrimination and hardships faced by sex workers – particularly those in the LGBT community. This feels authentic thanks to the casting of many fresh performers and members of the trans community. The narrative of the scorned woman is also immediately relatable meaning proceedings feel authentically humorous but never completely outlandish and unbelievable. Baker and co-writer Chris Bergoch’s script also taps a further emotional nerve by delving into the home-life of an Armenian taxi driver who frequents Sin-Dee and Alexandra.

Praise should also go to the wonderfully constructed conclusion of Tangerine, where all its various subplots merge in a hilarious, frantically paced, and emotionally-stirring collision.

Tangerine is a cult masterpiece. With a vibrant and colourful energy, outrageous humour, and a narrative that touches and feels important, Baker’s film is an out and out triumph.