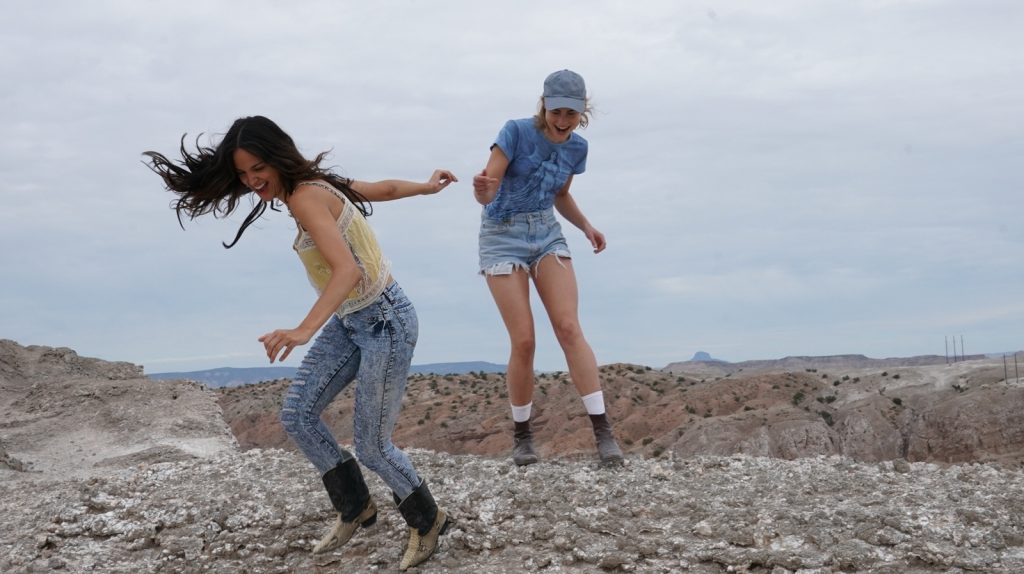 Irish writer-director Alexandra McGuinness takes us on a dreamy mystery through rural New Mexico in the atmospheric drama, She’s Missing.

Heidi’s (Lucy Fry) best friend Jane (Eiza Gonzalez), a casino bartender who dreams of being a rodeo queen, disappears. Heidi heads into the desert in search of her, meeting a variety of lonely lost souls leading her to a hallucinogenic conclusion.

McGuinness builds a stirring sense of mystery throughout her narrative. The prickly relationship between Heidi and Jane feels electric, sometimes offbeat – Heidi content in her waitress role, Jane pining for something bigger than her small town roots. Events don’t feel right building up to Jane’s disappearance – mainly an impromptu marriage and moving to a military base. Nothing sits right and the sense of mystery is the driving force behind the narrative, beautifully paired with stunning visuals capturing the loneliness of the American rural landscape.

Cinematographer Gareth Munden captures the natural enigmas found in washed out sun-scorched rocky deserts, the sad emptiness found in lonely casinos, and the chaotic thrills of a busy rodeo. These settings compliment the air of mystery pulsing throughout She’s Missing. This canvas allows for Fry’s central performance to shine as she navigates the confusing locales and offbeat locals with a vacant confusion. McGuinness adds further depth to Fry’s character by symbolic dream sequences which develop throughout the narrative and deepen the woozy, unsettling atmosphere of the film.

Yet there is a sense that the narrative of She’s Missing is heading blindly into the unknown – enticing to begin with – but then it builds to a somewhat unsatisfying final act. Attempting to answer some of the mysteries, a Josh Hartnett lead cult delivers tired Hollywood/Manson mythology which feels a little too disjointed when compared to the woozy mystery of the first two acts.

She’s Missing finds success in its exploration of prickly female relationships and crafting a dreamlike sense of mystery and unease in its masterfully depicted locations.