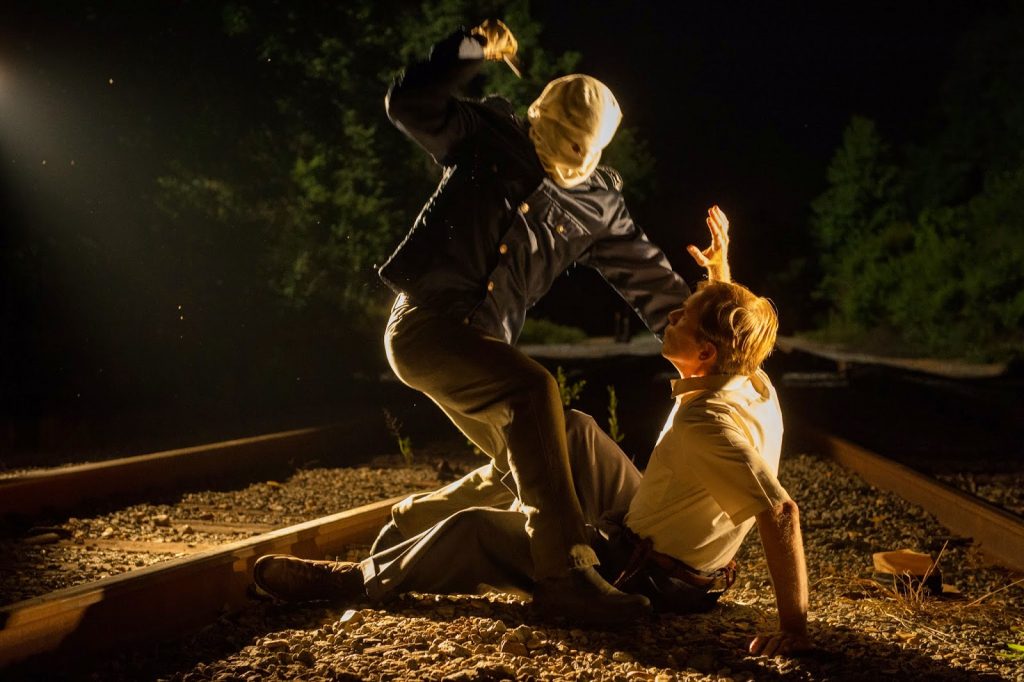 Ryan Murphy’s passion for the horror genre goes cinematic in his meta-sequel to 1976 cult slasher, The Town That Dreaded Sundown, which he produces. With director Alfonso Gomez-Rejon, Murphy has brought new life to the story whilst simultaneously paying loving homage to the classic seventies horror.

Set sixty-five years after the murders which inspired the original film, we return to the small American border town of Texarkana where a similar pattern of killings begin again. Since being spared by the killer, high school outsider Jami (Addison Timlin) sets out to get to the bottom of the case, as do both the Texas and Arkansas police forces.

Avoiding the dull conventionality of a complete reboot, Roberto Aguirre-Sacasa’s screenplay carefully unfolds in a world where both the original films and killings that inspired it are completely real. In some respects vaguely similar to Wes Craven’s Elm Street tour de force New Nightmare, 2014’s Town feels more like an engaging homage than an attempt to kick off a potential series. Within this meta framework, Gomez-Rejon embraces the traditional grungy slasher dynamic of the seventies whilst manoeuvring and celebrating the best of director Charles B. Pierce’s original film.

Stowed with footage from the original (the first set of new murders take place after a drive-in screening of the 1976 classic), this follow-up spares nothing in terms of brutality. Blood-soaked imagery, inventive locations, and taut direction ensure that the follow-on is a consistently tense and impressive genre piece. The return of the bladed trumpet, now seen in an attack at a dilapidated dumping ground for neon signs is blood-curdlngly grim, whilst a frantic chase throughout tall cornfields makes for another welcome set-piece.

Interestingly the team here present Texarkana as a town that has not moved on from past tragedy, with Pierce’s film standing as a haunting reminder. Costumes and set design feel intentionally dated in an attempt to craft the unchanged, bleak atmosphere of the town, which provides the film with a unique aesthetic character. Within Texarkana we see the moral majority lead by the late Edward Herrmann’s Reverend Cartwright attempt to move on and remove traces of the film, whilst simultaneously using it to boost church numbers by striking fear into the hearts of townspeople. This dichotomy – and several other interesting meta-twists – showcase Murphy’s Town as one with a little more brains than the average slasher.

It would have been welcome to see Aguirre-Sacasa embrace the potential humour that works so well with the genre, as his film occasionally verges on over-serious and somewhat too self-aware – something that doesn’t really work when you see someone impaled with a blade attached to a trumpet. Fortunately the cast of cult favourites clearly embrace the lighter side of the genre with some completely game performances. Denis O’Hare amps up the crazy as original director Charles B. Pierce’s (fictional) obsessed son, whilst Veronica Cartwright is a welcome presence as Jami’s loving grandmother. Gary Cole, the late great Ed Lauter, and Anthony Anderson add some charm to the policing roles, whilst Timlin proves herself to be a more than capable genre lead.

Fans of the original film are sure to enjoy the intelligent meta approach, whilst The Town That Dreaded Sundown is also likely to please B-Movie fans looking for some well-crafted shocks and bloodlust. With a cast brimming with cult favourites and some inventively gory set-pieces, Murphy’s follow-up is a welcome treat.