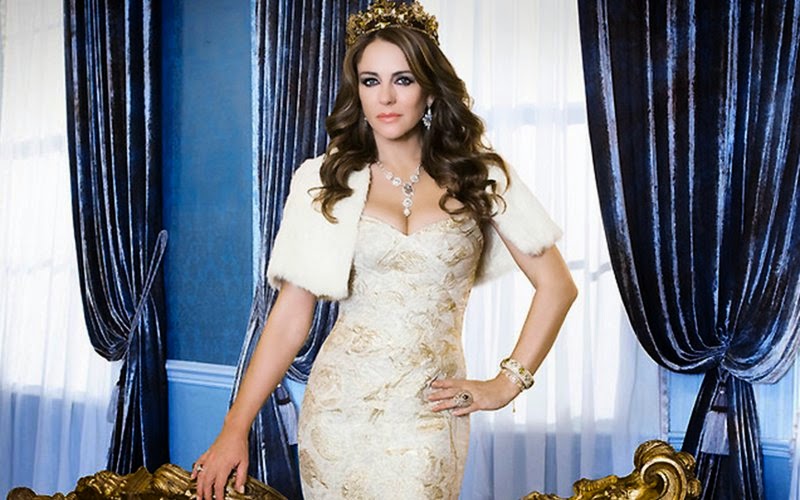 It’s no secret that we rate British national treasure Elizabeth Hurley very highly here. Her standout performances in Austin Powers: International Man of Mystery and the gleefully naughty Bedazzled proved that she’s a dab hand at comedy, whilst roles in Method, Gossip Girl, and most recently Viktor have showcased her refined dramatic talents. Therefore, it’s safe to say that we were highly anticipating the E! network’s debut dramatic series, The Royals, a tale of a fictional British monarchy basking in all the sex, drugs, and debauchery that this privilege allows – with none other than Hurley playing the series’ fictitious Queen.

In a television landscape now populated with slow-burning noir (the excellent True Detective, Fortitude etc.) and delicate period dramas (Downton Abbey, Mr. Selfridge), The Royals arrives like a steam-train bursting with chaotic energy. Devised by One Tree Hill’s Mark Schwahn, it’s clear that this is not going to be your standard take on the British crown from the very onset: we see Hurley’s Queen Helena note “Of course, I’m ready. I’m the Queen of England” as The Rolling Stones’ Gimme Shelter plays in the background. Meanwhile second-in-line to the throne Prince Liam (the undeniably hunky William Mosely) seduces a young American at a traditional pub, as his party-girl Princess sister Eleanour (Alexandra Park) snorts coke and downs shots. Welcome to E!’s brand new royal family. It’s brash, over-the-top, and wickedly entertaining.

Whilst stylistically The Royals is incredibly modern, it also successfully harks back to the days of the classic night-time soap opera. There’s a little Dynasty and Dallas to be found in this tale of the filthy rich, well, being filthy. Like these shows, The Royals is loaded with a wicked sense of camp humour, over-the-top decadence, and ambitious plot twists. The show doesn’t even make it to the five minute mark before Hurley’s media-savvy Queen Helena is talking about “Royal Beavers” – there is also an Alexis-like sharpness in her put-downs to Prince Liam’s ‘common’ American girlfriend (Merritt Patterson). Tongues remain firmly-in-cheek upon the arrival of dim-witted Princesses Penelope and Maribel whilst their scheming father Prince Cyrus plots in the background. We can already feel the drama developing. However, the shining jewel at the heart of The Royals is Hurley who commands the screen. Whether she’s in grief-stricken mother or sharp-tongued monarch mode, the actress is a consistent joy to watch.

Throw in a narrative which sees the King (Vincent Regan) questioning abolishing the Monarchy, Princess Elanour getting blackmailed by her sexy bodyguard (Tom Austen), the death of the family’s eldest son, and the impending arrival of the legendary Dame Joan Collins as Helena’ Mother, the Grand Duchess of Oxford, and you have the ingredients a must watch series.

The Royals is a real triumph for E! This is a series willing to have some fun whilst serving up juicy drama, irresistible characters and the gleeful decadence of the classic soap opera. It’s our new TV obsession.

The Royals airs in the US on Sunday nights at 10/9c on E! UK viewers can catch the show March 25th.