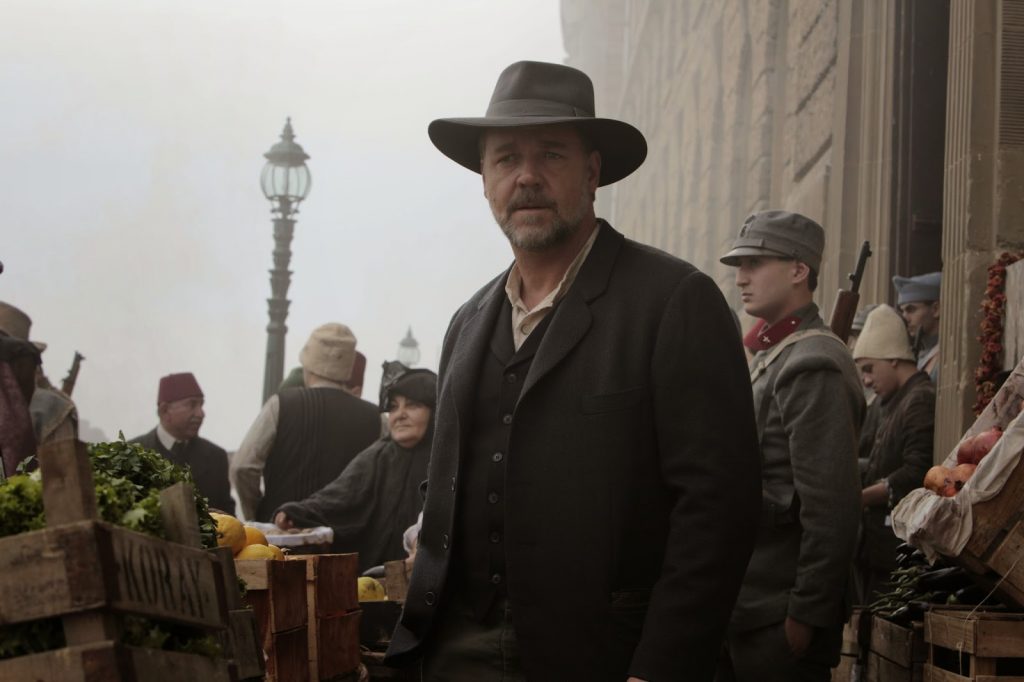 You would be wrong presuming that Russell Crowe had opted for a small scale project to launch his debut as a director. The actor’s first feature, The Water Diviner, is a film of magnificent scale with a hard-hitting emotional pulse and staunch anti-war message.

After his sons are killed in the ANZAC battles in Gallipoli, Joshua Connor (Crowe) travels to Turkey in the hope of bringing his boy’s bodies home. He soon gets caught-up in conflicts in the war-torn Ottoman Empire.

Writers Andrew Anastasios and Andrew Knight take a simple, highly-personal story and lay it across a sweeping canvas that explores the horrors of conflict and post-war life in Turkey. Refusing to take a political side in the conflict, The Water Diviner instead looks at the affect of war on soldiers – through its harrowing battle scenes – and on the many grief-stricken families. This is given both an Australian perspective (through Connor’s story) and a Turkish one (seen in Olga Kurylenko’s kind Turkish hotel owner Ayshe).

Evoking the majestic direction of the likes of John Huston and David Lean, Crowe has crafted a modern day epic packed with a grand, sweeping character and impressive set-pieces. The Gallipoli-set battle scenes are filmed with a gripping intensity and what feels like a bold authenticity. Perhaps more shocking is the bleak emptiness of the island after the battle. Atmospheric cinematography from Andrew Lesnie captures the historical beauty in Turkish locales, the baking emptiness of the former war-zones, and the near-mystic character of the Australian outback. The Water Diviner is a true visual feast.

The Water Diviner is a real breath of fresh air as it explores a little-seen side of WW1 – that of the thousands of ANZAC and Turkish soldiers in conflict. There is a sense that this is a story that needed to be told. Breaking this global conflict down to a personal level through Connor’s story helps craft an intimate, intelligent and affecting message about the lives wasted in war- as well as a gung-ho study about the lengths grief can drive us to.

This is not an entirely solemn watch. There is fun to be had in Connor, the gruff Australia, being thrust into Turkish culture, there is charm in the character-dynamics, and plenty of old fashioned adventure in the action scenes. An inspired lead performance from Crowe keeps proceedings engaging and utterly convincing. A supporting turn from the excellent Kurylenko explores life after the conflict, whilst a moustachioed Jai Courtney charms as the kind-hearted military man picking up the pieces on the battlefields. Turkish actors Yilmaz Erdogan and Cem Yılmaz do well at putting a human face on the role of the ‘enemy’.

The Water Diviner is an inspired debut from Crowe. An affecting narrative, heartfelt, yet sweeping direction, and consistently strong performances help this stand out as one of the year’s best.