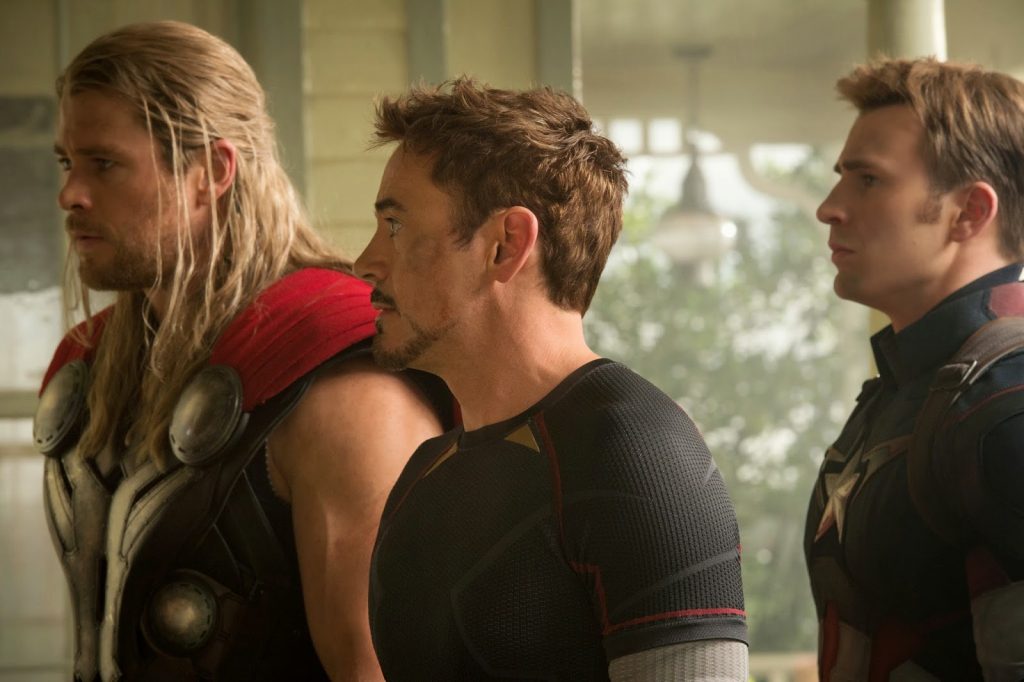 There are spoilers in here so watch out.

Since we are a little late to the fold with our review of Avengers: Age of Ultron we thought it would be more fun to simply pick and choose our best and worst moments from the blockbuster sequel. Plus there are four hundred and seventy-six thousand other Avengers reviews online for you to choose from and we’re not as deluded as to think that what we have to say hasn’t already been said in reviews elsewhere.

Here’s what we LOVED about Avengers: Age of Ultron: 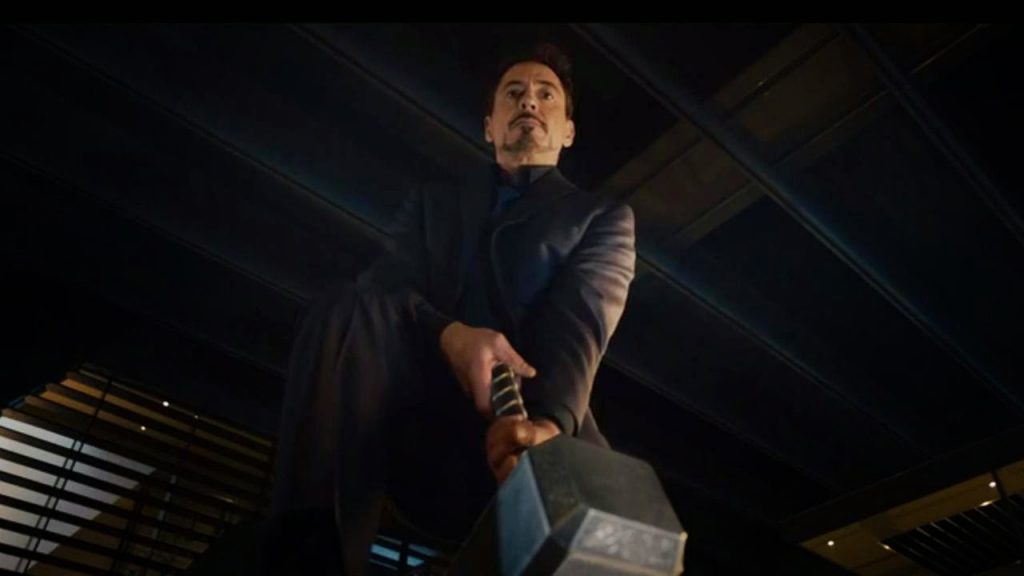 Whilst never completely going overboard with the humour, Joss Whedon manages to present some well-pitched banter between the Avengers which proves to be one of the strongest assets (if not the strongest one) of this ensemble film. Opening with the raid on the Hydra outpost gags about Captain America’s aversion to bad language immediately add some fun, whilst a party set piece revolving around lifting Thor’s hammer is highly chuckle-worthy.

We were originally cynical when the villain of the sequel was announced through the subtitle Age of Ultron. The thought of another robot filled us with a pre-prescribed sense of boredom – but the reality couldn’t have been any further from our expectations. Whilst Ultron isn’t anywhere near our favourite Marvel villain (that cheeky devil Alexander Pierce gets that honour), James Spader is a real force to be reckoned with here thanks to some inbuilt sass and a shiny titanium bod. There’s something of John Lithgow in this performance, which brings us to our next point – cast John Lithgow as a villain, Marvel. 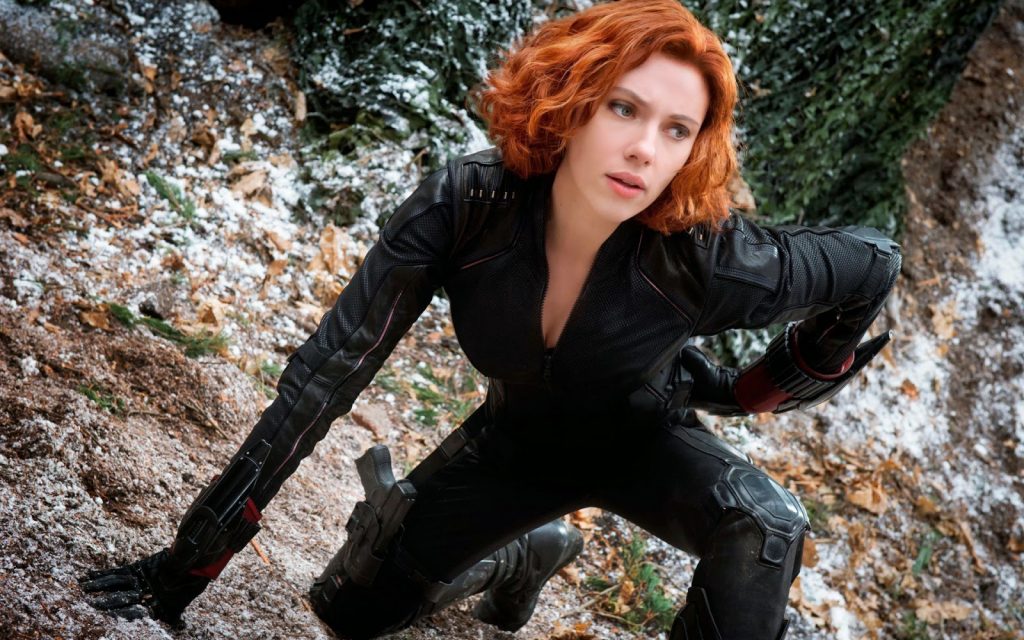 You would think with the multitude of films that Marvel will be firing out within the next four years that they would find time to slip out a Black Widow movie – but sadly that isn’t looking likely, but at least the studio quenched our thirst slightly with incredibly brief Romanoff flashbacks. Scenes set with the young Russian agent at a KGB training school (being guided by none other than Ms. Julie Delpy) were a real treat and showed the potential angle a Black Widow origins tale could take. 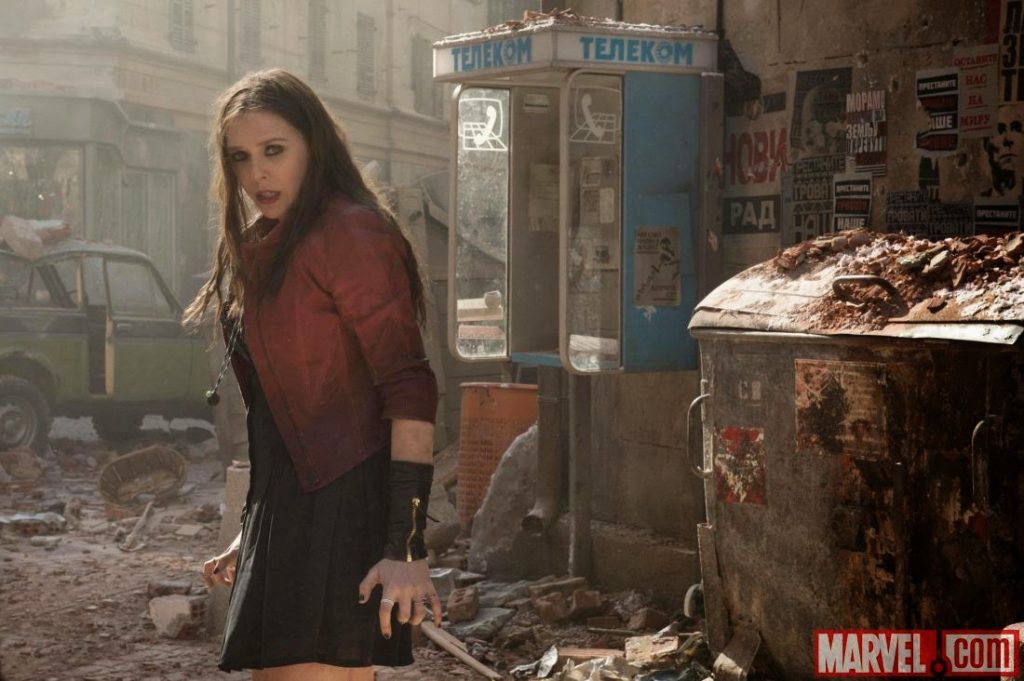 Marvel is certainly better than other studios for featuring kick ass female characters (and there are plenty to be found in their literary back catalogue), but cinematically the balance is still severely skewed in favour of male heroes. The introduction of one half of the mutant Maximoff twins, Scarlet Witch, adds another impressive heroine to the mix to join Black Widow. Elizabeth Olsen manages to convey an engaging insecurity as this would-be-superhero comes to terms with her abilities on the battlefield and overcomes her anxieties.

Chris Evans and Under Armour 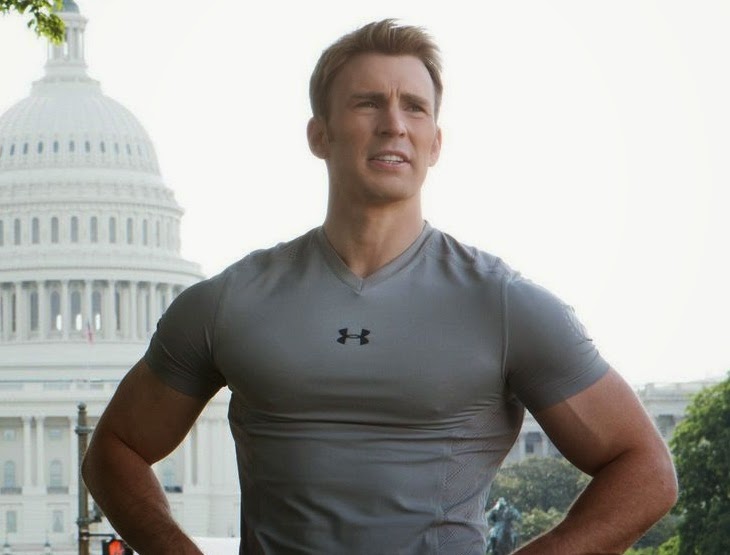 Product placement in films is normally garish and overbearing, but we’ll forgive it this time – in fact we will actively encourage it. Yes, Chris Evans’ Captain America’s penchant for tight (really tight, like actually unbearably tight muscle bulging, gun bustingly tight) under armour tops almost blew our tiny little minds. Just thinking about that log chopping scene sends us into an ovary-popping frenzy – and we don’t even have ovaries. We couldn’t find an Ultron under armour picture – we know, we’ve let you down. 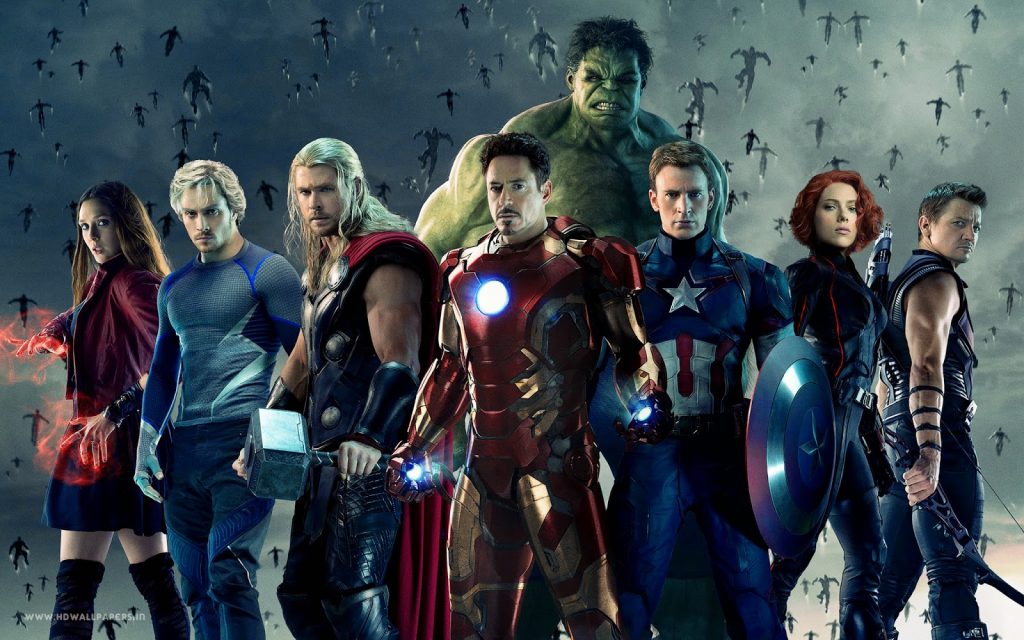 We view this one as a plus, although others might not. Our main issue with Avengers Assemble was the chaotic frenzy of the concluding battle – and whilst that was partly  the point by seeing the Avengers in over their heads, it ultimately proves forgettable as an action spectacle. Whedon exercises a bit more restraint here in the Sokovia battle scenes – they’re not drawn out for an inordinate amount of time, whilst the battle with Ultron is relatively swift and satisfying.

We DIDN’T LOVE these things very much:

This really irked us. The completely unfounded fauxmance between Bruce Banner and Natalia Romanoff was wholly unnecessary and demeaning to the film’s central female character. Teasing romances between Johansson’s heroine and every character with a penis undermines one of the very few tough, independent female characters here. Why does Black Widow need to be involved in potential love-stories throughout?  Are we just subconsciously bitter she didn’t bang Cap? No. 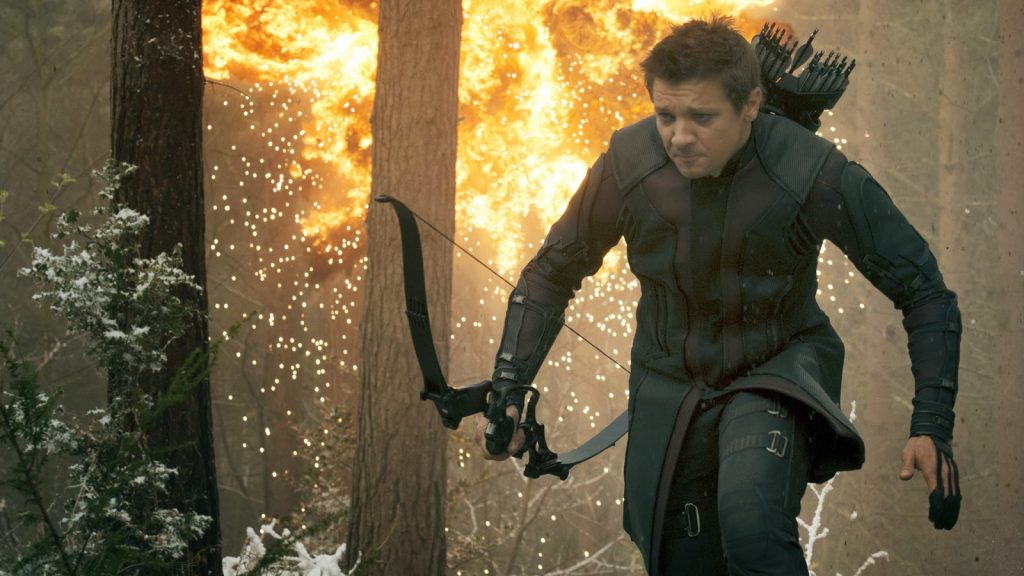 The whole ‘there’s more to Hawkeye than just being good with a bow’ angle had potential to be quite interesting- but it wasn’t. Perhaps its just Jeremy Renner’s speculated closet case status but we were hoping Hawkeye was going to be a bit gay – like little beach house in Provincetown gay. Sadly it wasn’t to be because the film introduces us to his wife and kids (yawn). We’re just going to presume that’s a cover-up and he’s sleeping with Cap. Someone please sleep with Cap. Not old Peggy though. 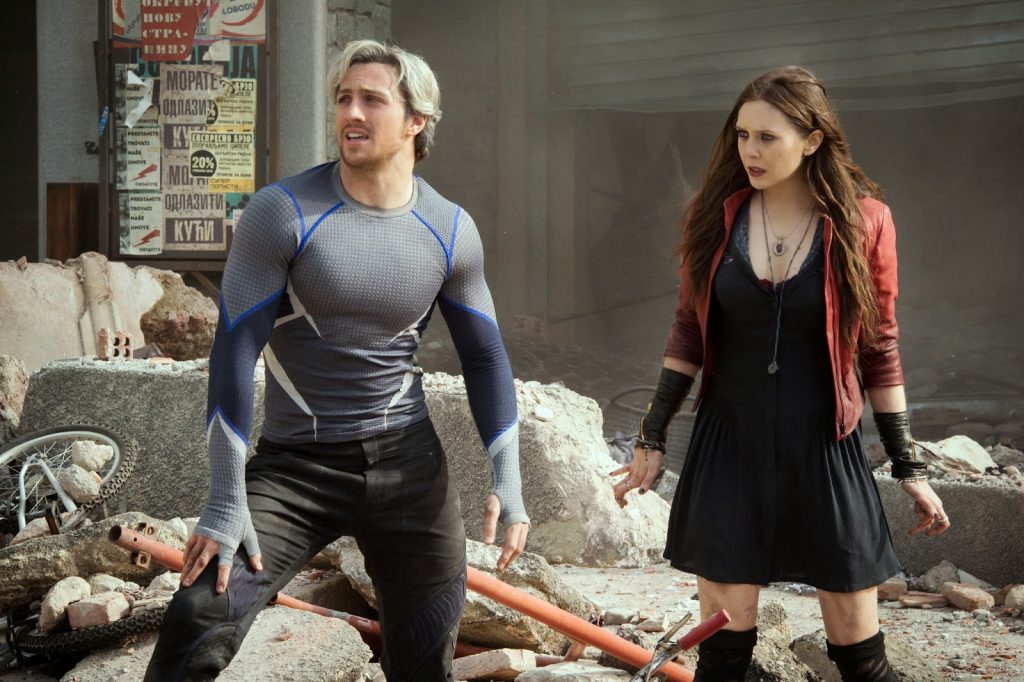 Maybe because Marvel already conceded defeat to Fox who presented their potentially superior version of Quicksilver in X-Men: Days of Future Past, but we thought it was a little premature to bump Aaron Johnson’s character off at the end of the film. Given the abundance of characters in play here it felt like we didn’t get to see much of the little speeder in action. 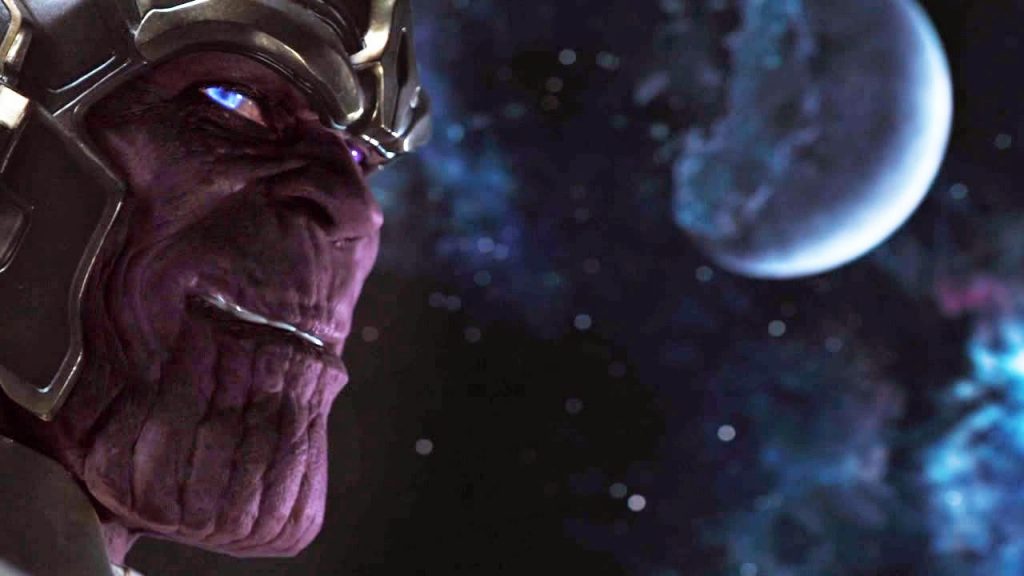 Thanos or Yawnos is something we’re already dreading about the Avengers: Infinity War. The mid-credit tease featuring the galactic Brolin-beast hunting for infinity stones just reminded us of what a dull and two-dimensional villain we have to look forward to. The villains of Guardians of the Galaxy (other than Benicio Del Toro’s Collector and Michael Rooker’s Yondu) were some of the worst the Marvel films have seen, so the thought of villainous aliens populating the conclusion to the core Avenger’s films is slightly disappointing.

Other than these few negatives, we really found Age of Ultron to be a more concise and generally more enjoyable experience to the chaotic first Avengers film. But what did you guys think?