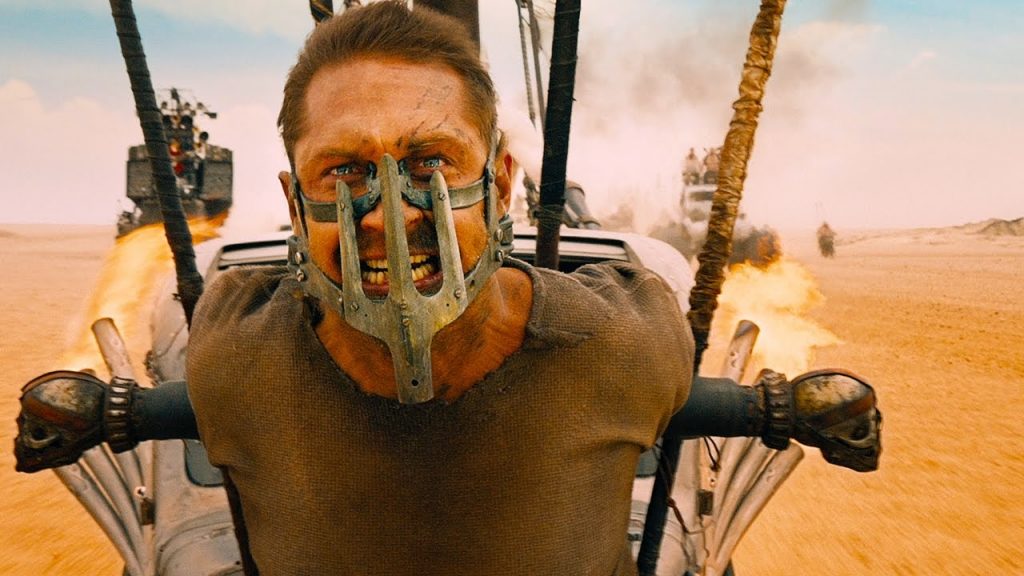 After several false starts throughout the noughties, director George Miller finally returns to the Mad Max franchise with Fury Road. With no Mel Gibson in sight, this dustbowl of unrelenting action presents Tom Hardy in the titular role – a move that proves inspired, especially when paired with Miller’s grandiose direction.

Max Rockatansky is brought together with the warrior Imperator Furiosa (Charlize Theron), aiding her in her quest to transport a ruthless warlord’s enslaved harem across a stark, yet dangerous desert landscape. This ruthless warlord, Immortan Joe (Hugh Keays-Byrne), is unsurprisingly hot on their trail with legions of unhinged warboys.

Miller has delivered a cult film in an immaculately crafted blockbuster package. Recapturing the ramshackle post-apocalyptic world of the Gibson trilogy, Fury Road feels like a souped-up continuation that amps up the ferocious spectacle, grotesquery, and unrelenting tension of the prior films. The result is a masterpiece of action cinema that excels both in aesthetics and narrative.

Whilst Tom Hardy’s gruff, man of few words Max is very much the beating heart and embodiment of the film’s explosive spirit, Fury Road has an admirable proto-feminist narrative. Furiosa is a bold and memorable alternative to Max – a warrior through and through, yet one who thinks with her head and not with brash actions. Warlord Immortan Joe’s harem prove themselves equally adapt as Fury Road progresses – with each bringing to the fold a unique identity and integral narrative importance. Here in this post-apocalyptic world, the women are the heroes – and Max complements this tremendously, showcasing the strength and the respective genders with thundering might.

Of course, this is a Mad Max film and one shouldn’t get the impression he sits this one on the sidelines. Hardy’s Max is utterly mad, unhinged to the core in ways previously unseen. The effects of the bombardment of relentless action are seen on this man – especially in the earlier scenes which show him tormented by Immortan Joe’s unhinged goons and ultimately muzzled and strapped to the front of an armoured warboy dirt-racer. Hardy brings his expected intensity and a rugged sexiness to the fold – this is a Max that we need to see again.

Fury Road also excels in visual design and effects – with a higher-emphasis on practical effects than computer-generated ones, Miller’s film feels burningly raw and painfully gritty. By structuring the film around a tense chase (Furiosa, Max and the Harem pursued by Immortan Joe and his rag-tag army of hundreds), the action in Fury Road is always bombastically cranked-up and explosively immersive. Margaret Sixel’s editing is relentlessly fast-paced and continually creates oodles of gripping tension, whilst the anthemic and dread-fill soundtrack from Junkie XL is entirely befitting of the film’s atmosphere – although we could have killed to see Tina Turner appear and belt out We Don’t Need Another Hero.

In terms of John Seale’s cinematography, Fury Road is equally remarkable with each shot poised in a terrifying yet remarkable beauty – a true rarity within the action genre. From barren dustbowl deserts with ominous hazy mirages to the Immortan’s mountainous lair, every particular detail feels perfectly befitting of the post-apocalyptic subgenre.

It’s not often we use this term but Mad Max: Fury Road is a flat-out masterpiece. This is without doubt the best action film of the decade.