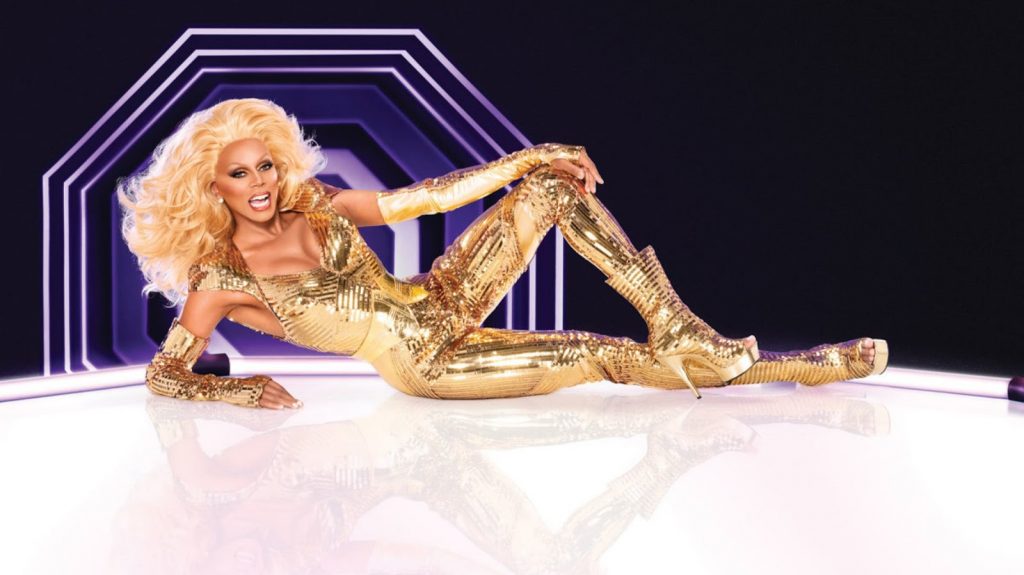 RuPaul’s Drag Race has finally found a permanent home on British television thanks to TruTV. The show previously appeared on E4 in a bizarre early-morning slot that was only witnessed by insomniacs, meth-heads, or the increasingly frustrated mothers of restless babies. Now the show airs at the far more sociable time of Monday nights at 10 pm.

For those unaware of the cult contest, legendary drag artist, singer, presenter, and all round icon RuPaul presents Drag Race, a show that sets out to find America’s next drag superstar. The queens are put through a series of challenges with each episode ending in a themed runway challenge and ultimately a lip sync battle between the two weakest queens.

To celebrate the (re-)arrival of Drag Race to UK shores, we’ve looked at the best RuPaul tracks which you can enjoy below.

Taken from RuPaul’s fifth album, Glamazon, (Here It Comes) Around Again, is a perfect slice of contemporary Ru – thumping synths, a soaring chorus, and immaculate vocals. There is also a great Matt Pop Stock-Aitken-Waterman style remix that we’ve included below – because it’s incredible.

Whilst RuPaul’s latest album Realness has a nineties house vibe (similar to past releases), it features LGBT a rocking pop number that feels like poppy Def Leppard meets a dance-rock anthem. Plus it also features Chi Chi LaRue who sounds incredibly similar to the Latin superstar, Ricky Martin.


Packed with funky horns and sassy vocals, Click Clack (Make Dat Money) is one of RuPaul’s most instantly loveable anthems. Now where my girls at? Make your heels clap.

Cover Girl kicked off RuPaul’s first album in almost five years back in 2009 and confirmed that the drag superstar was back with an almighty bang.

This empowering anthem is a joyous slice of pop heaven that perfectly captures the Drag Icon’s personal mantra (‘If you don’t love yourself, how in the hell you gonna love somebody else?’) and positive energy.

This one is a real favourite here at Culture Fix. RuPaul teamed up with Brigitte Nielsen (aka Gitta) in 2002 for You’re No Lady, a camp Eurodance classic. Watch the iconic Spanish television performance of the track below, which is a little bit of hot mess fun. The track even hit #1 in Spain. Yaaas!

Another classic from RuPaul’s Champion album is Main Event which starts off with a soft piano introduction before turning into a soaring dance anthem that again inspires and makes you wanna boogie.

The title track from 2011’s Glamazon is a power-pop anthem packed with a catchy melody and sing-a-long chorus filled with eighties video game soundtrack nostalgia.

RuPaul’s mainstream debut single cracked both sides of the Atlantic and is the ultimate contender for our favourite RuPaul track. Supermodel is a perfect house anthem soaked in a sweaty nineties club euphoria. You better work.


All Mama Ru’s albums are available on iTunes *winks at camera* Catch RuPaul’s Drag Race tonight on TruTV at 10pm.