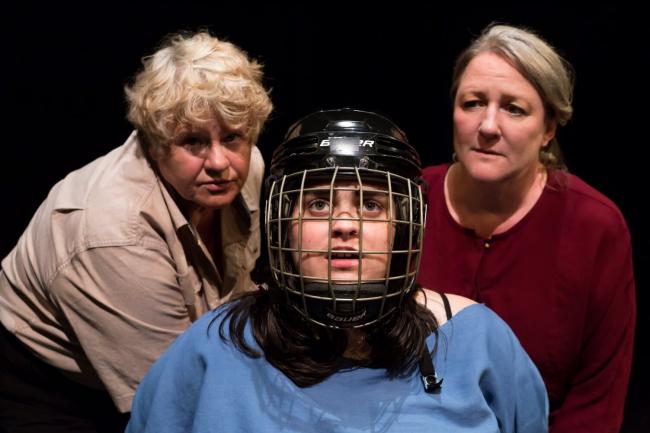 Canadian playwright Judith Thompson’s 2016 work Watching Glory Die is adapted by the Windsor Feminist Theatre company resulting in a visceral, devastating piece that explores the damaging effect of the Western penal system and its failure to support mental illness.

Based on the 2007 case of Ashley Smith, Watching Glory Die follows three intersecting tales of women and the prison system. Nineteen year old Glory (Nathanya Barnett) kept in solitary confinement at Grand Valley Institution for Women after “assaulting” the postman and continually reoffending through her failure to cope in prison. Her adoptive mother Rosellen (Kelli Fox) believes she can feel her daughter’s pain, whilst correctional officer Gail (Kathryn Haggis) believes there is a fine line between discipline and support when working with inmates like Glory.

Watching Glory Die is striking theatre that forces us to challenge our assumptions of societal institutions like the prison system. By drawing us into and humanising ‘offending’ characters like Glory, Thompson’s work forces us law-abiding citizen to think about agencies like the penal system and concepts such as prisoner rehabilitation and prison reform – something that many of our lives will never intersect with. The narrative of Watching Glory Die divides its time between inmate, mother and prison officer, exploring each facet of the prison system and its effects – adding narrative depth and riveting emotion to the fold.

Glory is a character confined by the penal system, struggling with mental illness (visions of her crocodile birth mother) and during her five year plus incarceration has lacked any sense of compassion or nurture. These factors mean that Glory cannot help but reoffend, with each minor offence gaining her another sixty days of imprisonment. Barnett captures the sheer claustrophobic horror and relentless frustration of this solitary confinement which she faces. It is a bold, unflinching and often uncomfortable to watch performance.

Haggis’s prison warden Gail is a fascinating character – initially portrayed with a cut and dry, them vs. us approach to prisoner relationships, as the narrative progresses we see a more compassionate side creep in. Whilst simply ‘following orders’ Gail is torn by her own pressures – in need of this job and scared that the prospect of compassion towards prisoners could jeopardise this. The final of this trio of performers is Fox as Rosellen – the isolated mother, agonisingly cut off from her daughter who lives in a claustrophobic loneliness paralleling her daughter’s. Fox, Haggis and Barnett are outstanding stage presences who provide a rich human heart to this riveting, emotive project.

These central figures paired with intimate, claustrophobic stage direction help fully invest us in Glory’s struggle. The failure of ‘the system’ to care for vulnerable individuals and to rehabilitate and support young offenders instead of segregating, isolating and punishing becomes challenging to watch.