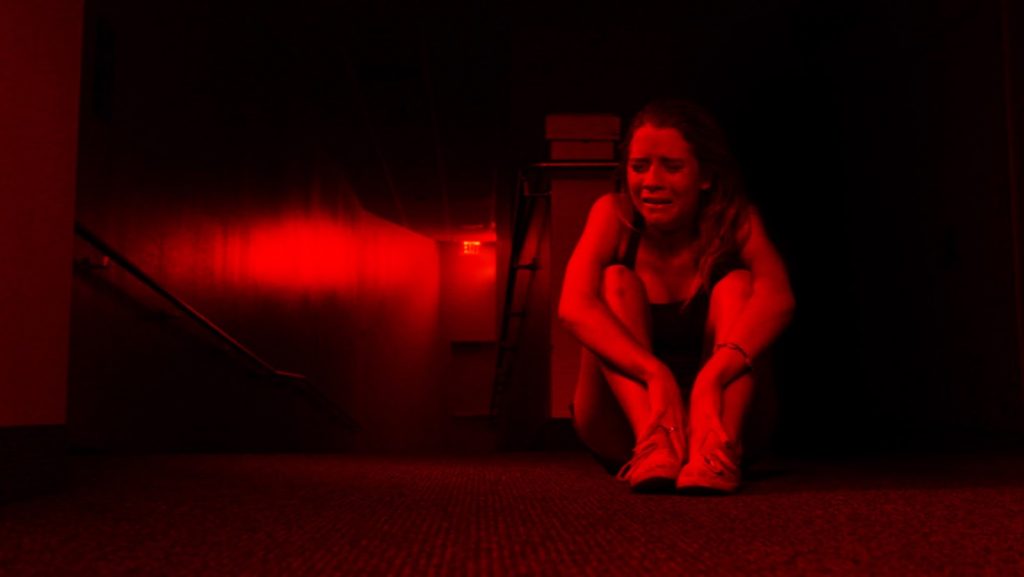 Like The Pyramid and Chernobyl Diaries, upcoming found-footage horror The Gallows joins the ranks of genre films with intriguing premises but drab execution. Obnoxious characters and predictable plotting hamper joint writer-directors Travis Cluff and Chris Lofing’s film, which is only kept alive by the odd moment of efficient suspense.

In a 1993 US high school production of The Gallows, a student is accidentally killed in the titular device. Twenty years later a revival of said play awakens a sinister force which terrorises four students trapped in the school at night.

In its opening, which features amateur home video style footage of the 1993 accident, The Gallows gets off to a chilling start. There’s an undeniable horror in this realistic VHS footage of a high school production gone wrong as the accidental victim is caught in the real noose. This initial terror is quickly abandoned in favour of supernatural hokum and a cat-and-mouse style pursuit through the darkened school corridors as we reach the present day setting. Here the obnoxious drama students attempt to sabotage the production, but instead find themselves pursued by a ghostly blood-craving hangman.

If you’ve seen the trailer for The Gallows, the overwhelming negative response to the film may come as a surprise. The punchy teaser for the project is stomach-churningly tense and boldly atmospheric with its blood red lighting – this is the benefit of marketing the film through one of the film’s few effective scenes. The predictable narrative surrounding this sequence is where things get watered down with found-footage clichés and contrivances aplenty as one by one the obnoxious teen leads are bumped off in gradually less interesting ways.

The starting point of in-film play The Gallows (which appears to be a Crucible inspired text) is ripe for exploration with themes of puritans, witch trials, and hangings immediately springing to mind. However, this feature shows little interest in exploring anything deeper than some cheap deaths at the hands of a ghostly being. Sadly there’s no investment in the protagonist’s survival as they’re some of the most unlikeable, crass, and sappy millennials the genre has seen in a while.

There are occasional glimmers of hope in Cluff and Lonfing’s direction as they savour tense build ups to potential scares as characters uncover hidden parts of the school. For the most part, these build-ups lead to red herrings and The Gallows is unlikely to provide the scares to unsettle even the most nervous of viewers.