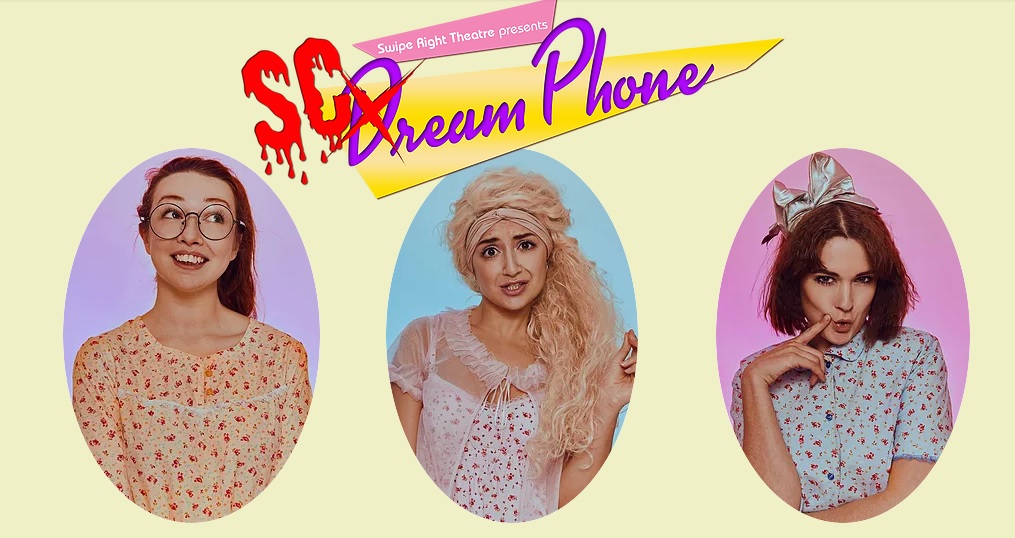 Popular ‘Beaver Babe’ Melody (Granger) invites her school friends man-eating Janice (Thomason) and book work Stacey (Alexandra Lewis) to her creepy home for a sleepover. Here they begin to receive calls on their ‘Dream Phone’ from a scorned school-mate which begins to lead to some sinister proceedings.

Playing with films like Scream, I Know What You Did Last Summer and When a Stranger Calls, Scream Phone finds the high camp humour in classic horror tropes and revels in sending them up. The spirit of teen comedies like Clueless feel present in the hilariously direct and gleefully bitchy dynamic between the three girls – sending up the notion of the classic ‘popular girl’ teenager: obsessed with boys, looking glamorous and rebelling from parents (Thomason steps into the dual roles of both Janice and Melody’s eccentric mother). From sinister cutaways, eerie powercuts and malevolent voices on the phone – Scream Phone delights in sending up the genre in the silliest ways possible.

The joy of Scream Phone is the game humour embraced by the production’s three actresses. All guards are dropped and these performances embrace the high camp nature of the narrative – Granger excels as the bitchy blonde Queen Bee whose razor-sharp off the cuff remarks shine (“You frigid slut!”), Lewis delights as the over-the-top bookworm obsessed with Melody, whilst Thomason provides belly laughs as ditsy faux-man eater Janice (a condom eating scene brings a blend of true horror and manic hilarity). The three actresses have a sparky chemistry and command the stage as the trio of ruthless Beaver Babes.

Praise should also go to composer Martin Higgins who crafts the musical angle of the show. Taking classic eighties hits and turning them into parody tracks helps transport us to the show’s eighties setting and enhances the camp fun of Scream Phone. Parody tracks paying homage to Like a Virgin, Kids in America, Girls Just Wanna Have Fun, Sweet Dreams, Heaven Is a Place on Earth and One Moment in Time bring further silliness to Scream Phone.

Scream Phone delights in embracing the camp of eighties’ popular culture. An unrestrained sense of humour and failure to take itself seriously ensures that it is a kitsch delight from start to finish.