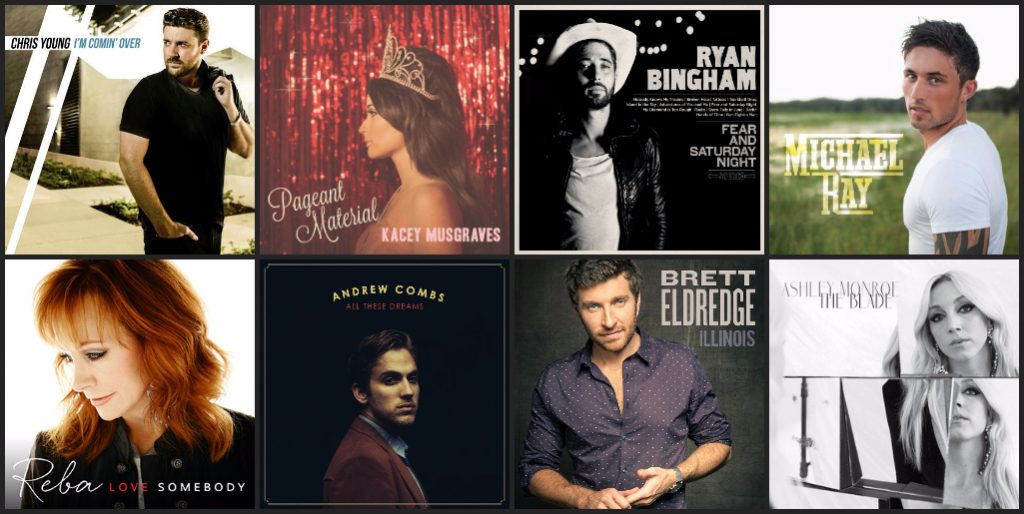 15. Michael Ray – Michael Ray
Download: Kiss You in the Morning, Livin’ It Up, Drivin’ All Night

Catapulting to attention with stellar debut single, Kiss You in the Morning, Michael Ray proved he was more than just a passing attraction in the country world with an assured debut album bolstering a strong sense of artistic identity. A misguided second single – the self-titled album’s weakest track Real Men Love Jesus – may have cut this campaign off prematurely, but the album features enough gems to be regarded as one of the genre’s best this year.

This joyously old fashioned album showcases Yoakam as an artist  still willing to have some traditional rockabilly fun – something we don’t see much of in the genre now. This energetic release packs a punch in its brief ten tracks, but it’s one that keeps us going back to embrace the ruckus.


13. Ashley Monroe – The Blade
Download: On to Something Good, Buried Your Love Alive, Weight of the Load, If Love Was Fair

Thomas Rhett flirts with country, pop and pop-rock on Tangled Up, the cheeky, personality-filled follow-up to his 2013 debut. From lush ballads like Die a Happy Man to the sports bar swagger of South Side, Rhett provides an eclectic mix that guarantees something to fit the mood you are in. Praise should obviously go to smash single Crash and Burn, whilst we have a soft spot for contemporary sound of the Jimmy Buffett-esque Vacation.

Like all McGraw’s recent releases Damn Country Music feels like a real event album packed with stadium-belting choruses and emotionally-charged lyricism. McGraw’s at his best here when he’s having a bit of fun with tracks like California, Losin’ You, and Love Runs – however, this is nonetheless a rich listen that grows with each spin.

Canaan Smith’s debut album Bronco was a well-polished slice of contemporary country that avoids the troubling bro-country trappings that he could have quite easily fallen into. Hole in a Bottle is a likeable beer-soaked anthem, whilst Love You Like That is a majestic mid-tempo ballad with a Sam Hunt quality to it.

Being honest, Brett Eldredge’s debut album did little for us so our love for this follow-up came completely out of the blue. Opening with the ballsy swagger of Fire, Illinois goes from strength to strength with the breezy Summer shine of Time Well Spent soaring and the supreme Drunk on Your Love feeling like an instant classic. Thomas Rhett collaboration You Can’t Stop Me provides some curious Chic-tinged country-disco fun.

Merle Haggard and Willie Nelson’s follow-up to 1983’s Pancho and Lefty sees the two country icons reflecting on old memories and sharing their good humour. Hearing these two old friends tackle some classics and the odd new number doesn’t break any new ground – but who needs it to when they’re so good at being great.


Boasting a more cinematic feel to her prior releases, the aptly titled Storyteller showcases Underwood at her best – belting out tales of heartbreak, strong women and true crime. The big emotional anthems excel like the epic Church Bells, whilst Smoke Break makes you feel like a hard-working single mom gasping on a drink after the school run – but it’s the quieter moments like Heartbeat that strike the most powerful emotional chord.

All These Dreams is a woozy slice of light country-Americana perfection that feels like it could be an unreleased Glen Campbell album. Quite simply a lovely album without a weak link – gentle choruses and an authentic spirit ensure this is an out and out pleasure.

We were wrong to write Luke Bryan off as the epitome of bro-country but Kill the Lights allowed us to appreciate him as a strong songwriter and also have some fun with his more light-hearted fare. A blend of the two styles, Kill the Lights provides rock-tinged country-pop through Move, Way Way Back, Love It Gone, and the title track, whilst Razor Blade and Strip It Down shine as gentle, streamlined country ballads.


4. Reba McEntire – Love Somebody
Download: Going Out Like That, Livin’ Ain’t Killed Me Yet, Until They Don’t Love You, Love Somebody, Enough

Reba wasn’t content on resting on old laurels for her twenty-seventh studio album and thankfully continues to break new musical territory – much of which is showcased on Love Somebody. Kicking off with the girl power anthem Going Out Like That, this continues to be one of Reba’s most empowering albums with fist-pumping anthems like Livin’ Ain’t Killed Me Yet and Until They Don’t Love You. The soaring Sam Hunt penned title track is another high point, whilst Reba still goes for the emotions with the powerful Enough, gentle Love Land, and poignant Just Like Them Horses.

3. Ryan Bingham – Fear and Saturday Night
Download: Adventures of You and Me, Broken Heart Tattoos, Island in the Sky, My Diamond is Too Rough

This raw and melancholy set sees Bingham – the world-weary storyteller – managing to convey so much with the his rich yet craggy vocals. It’s a curious mix balancing moments of weariness with upbeat Americana bliss. Highlights include the raucous fun of Adventures of You and Me and the sweeping melancholy of Broken Heart Tattoos.

This punchy eleven track album showcases Young’s earnest song-writing style with a selection of mid-tempo ballads that grow with each listen. The singer’s polished fifth album is a warm-hearted listen that excels in its low-key moments with ballads like Heartbeat, Think of You, Alone Tonight, Sober Saturday Night, and Callin’ My Name sitting among his best tracks. The only misfire is the Eric Church inspired Underdogs.

Musgraves’s second big label release sees the singer continue to opt for a lush traditional sound packed with a cheeky Southern irony seen in tracks like Biscuits. It’s a near perfect album that balances traditional sounding musings on life, family, and heartbreak with a contemporary wit and edge as seen in the album’s title track.