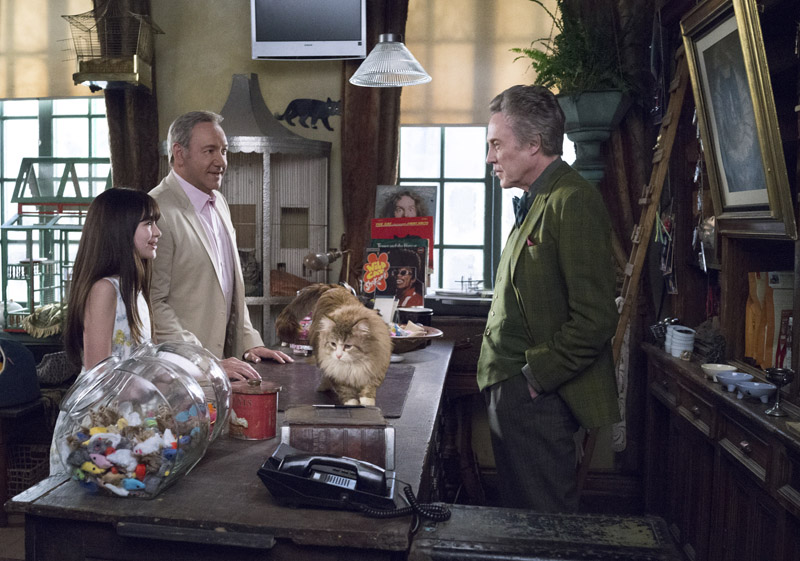 Some just thought of it as legend, others knew it was something more. The world was forever changed today and the course of history was sent down an uneven path with the release of the first trailer for Nine Lives.
This Barry Sonnenfeld comedy sees the (usually) esteemed Kevin Spacey make a return to the big screen to play a businessman trapped in the body of cat. Why? Because Christopher Walken puts him there*. It sounds like a fake 30 Rock film – but sadly doesn’t feature Jane Krakowski – who let’s face it, should totally be taking the Jennifer Garner role here. Robbie Amell and Cheryl Hines co-star.
Here’s the full synopsis – and fair play for anyone who reads the whole thing, we sure as hell didn’t care enough:

Tom Brand (Kevin Spacey) is a daredevil billionaire at the top of his game. His company is nearing completion on the tallest skyscraper in the northern hemisphere. But Tom’s workaholic lifestyle has disconnected him from his family, particularly his wife Lara (Jennifer Garner) and daughter Rebecca (Malina Weissman). Rebecca’s 11th birthday is here, and she wants a cat. Tom hates cats but needs a gift. He finds a mystical pet store where the owner, Felix Perkins (Christopher Walken), presents him with a tomcat named Mr. Fuzzypants.

En route to his daughter’s party, Tom has a terrible accident. When he wakes he discovers he is trapped in the body of the cat. Adopted by his own family, he begins to experience his life through a new perspective. In order to return to his family as the husband and father they deserve, Tom will have to learn why he has been placed in this peculiar situation.

Nine Lives opens on August 5th. Watch the trailer below:

*For those thinking “Why would Christopher Walken send Kevin Spacey into the body of a cat?”, well don’t worry because it makes logical sense. Walken once played a man-cat in Cannon’s iconic Puss In Boots live action musical – so it’s only fair that he would expect other actors like Kevin Spacey to channel their inner feline too.