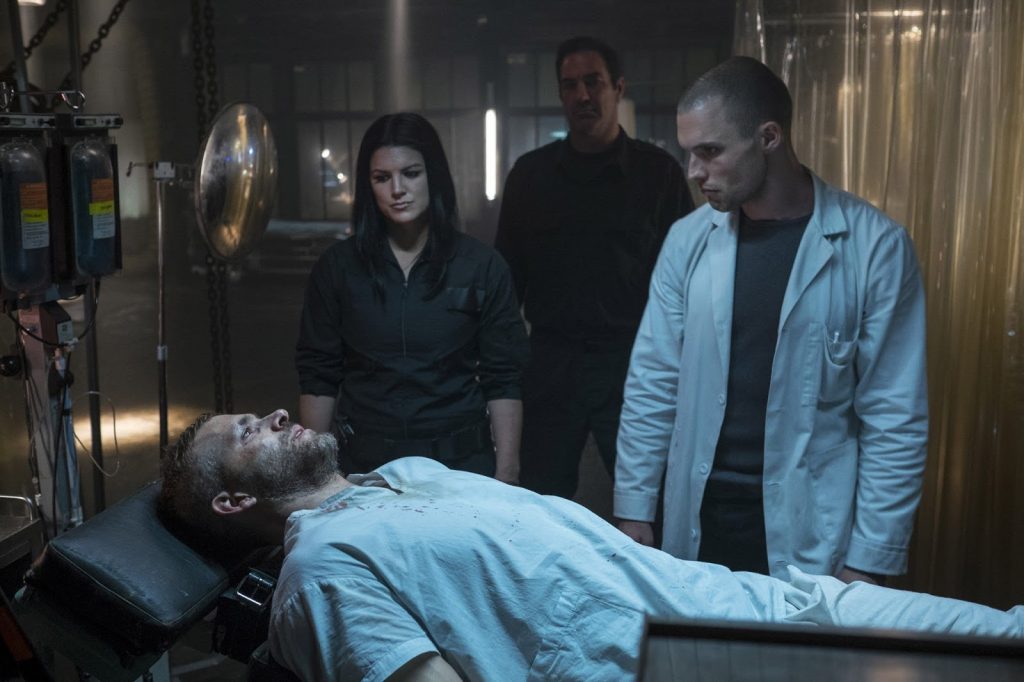 Ryan Reynolds finally finds the perfect star vehicle in Deadpool produced under the Fox branch of the Marvel cinematic universe. Whilst narratively it echoes many a superhero origins tale, there’s enough fresh gusto in Reynolds performance and writers Rhett Reese and Paul Wernick’s screenplay to ensure that fun will be had.

Directed by Tim Miller, Deadpool moves away from the muted X-Men Origins: Wolverine version of the character and makes us well and truly aware of that with plenty of amusing barbs. Instead we pick up with the handsome, yet unpleasant Wade Wilson (Reynolds), a former mercenary doing odd jobs – only finding solstice in the love of his life Vanessa (Morena Baccarin). However, this happiness is cut short when Wilson is diagnosed with terminal cancer – until a shady organisation offers to cure him. Instead this rogue experiment leaves him scarred, yet with an accelerated healing ability.

The one thing that helped Deadpool stand out from fellow Marvel counterparts was its R-Rated style – and judging by the initial financial performance, appears to be a lucrative USP. This increase in foul language, sex, and violence is a real breath of fresh air in a marketplace filled with tame superhero films. These elements decorate an otherwise standard origins story ensuring its punchy, fast-paced and moderately subversive.

Whilst Reese and Wernick’s screenplay has around a 50% successful gag rate (if we’re being kind), Reynolds’ sheer bombastic enthusiasm keeps Deadpool amusing and thrilling throughout. There’s a limit as to how many masturbation or Hugh Jackman references you can pretend to laugh through – but those versed in enough contemporary superhero films are likely to find plenty of easy amusement. Even when it is trying a little too hard, it is tough to dislike Deadpool thanks to Reynolds – his heart and soul are in this performance and its evident the actor is having the time of his life. Credit should go to Reynolds and his oozing charisma for making an unpleasant character, a protagonist that we laugh with and root for.

Jibes at the X-Men saga (on being taken to meet Professor X, a quip regarding “Is it McAvoy or Stewart?) and much directed at the kind-hearted Collosus – as well as the world of pop culture help Deadpool feel savvy and roguishly cheeky enough to get behind. Praise should go to Tim Miller’s generally tight action direction and strong sense of comic timing, despite the film’s end spectacle reeking of generic superhero final battle woes. There’s also excellent support from Brit Ed Skrein as Ajax, Wilson’s cruel experimenter, who packs a sneering charisma and energy into the role. TJ Miller is further welcome comic support.

There are enough thrills to be found in Deadpool’s R-Rated traits and Reynold’s gung-ho performance to ensure audiences will lap up this subversive superhero flick – despite some shaky material.