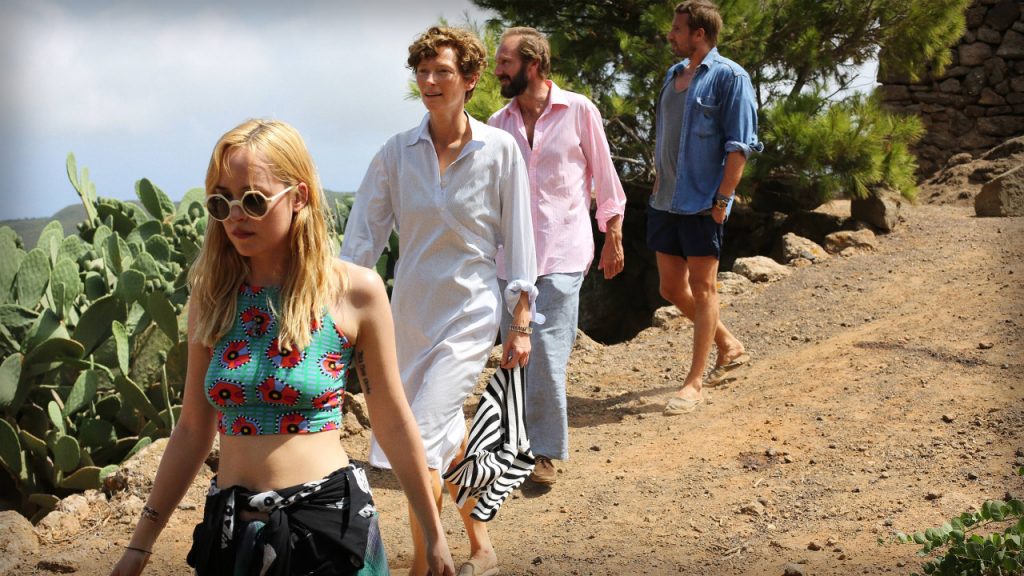 Tilda Swinton re-teams with I Am Love’s Luca Guadagnino for A Bigger Splash – a loose remake of the 1969 Jacques Deray picture La Piscine originally starring Alain Delon. The result is a simmering glimpse into hedonistic desire and privilege that veers into thrilling tempestuous tradgedy.

Rock star Marianne Lane (Swinton) recuperates on the volcanic island of Pantelleria in Italy with her boyfriend Paul (Matthias Schoenaerts) but their peace is shattered when her boisterous old-flame Harry (Ralph Fiennes) and his daughter Penelope (Dakota Johnson) arrive.

Guadagnino’s ponderous direction and cinematographer Yorick Le Saux’s immerse us in the desolate sun-baked beauty of Pantelleria – mirroring the heated, sweat-soaked tension between the protagonists. Crumbling island exteriors, local towns and cliff faces provide a quaint contrast to the excess and hedonism explored in Marianne and Paul’s holiday villa – especially upon the arrival of Harry and Penelope.

David Kajganich’s screenplay revels in the tense dynamic that surrounds these four characters. Whether exploring a potential rekindling of Harry and Marianne’s relationship, the off-kilter (near incestuous) father-daughter relationship between Harry and Penelope, or the apparently strong bond between Marianne and Paul – to mention but a few. Each combination of characters sparks its own atmosphere of sensuality, ferocity or unease making an often uncomfortable yet enthralling watch. As tensions build throughout, A Bigger Splash hits its peak in its thrillingly final act which feels part Jacques Deray, part premium Patricia Highsmith .

Guadagnino’s heated approach sees the film revel in its excesses as we follow our protagonist’s hedonistic behaviour in scintillating sex scenes (naked Matthias is a particularly highlight – as always, although he certainly is not the only one to bare all) or alcohol-spurred scenes of karaoke or childish violence. A peacocking Ralph Fiennes’ dance sequence to The Rolling Stones’ Emotional Rescue is likely to become a cult-favourite among arthouse audiences, whilst capturing the trivial excess embraced by our foursome. These appear all the more unsettling when contrasted with a timely subplot exploring the current refugee crisis – handled with enough quiet impact to whir at your conscience.

Each cast member excels, however, its Schoenaerts’ pained silence that resonates the most by the film’s final stages as tragedy sets in. Swinton, Fiennes and Johnson are all predictably excellent in this tempestuous tale of sun-baked unease.