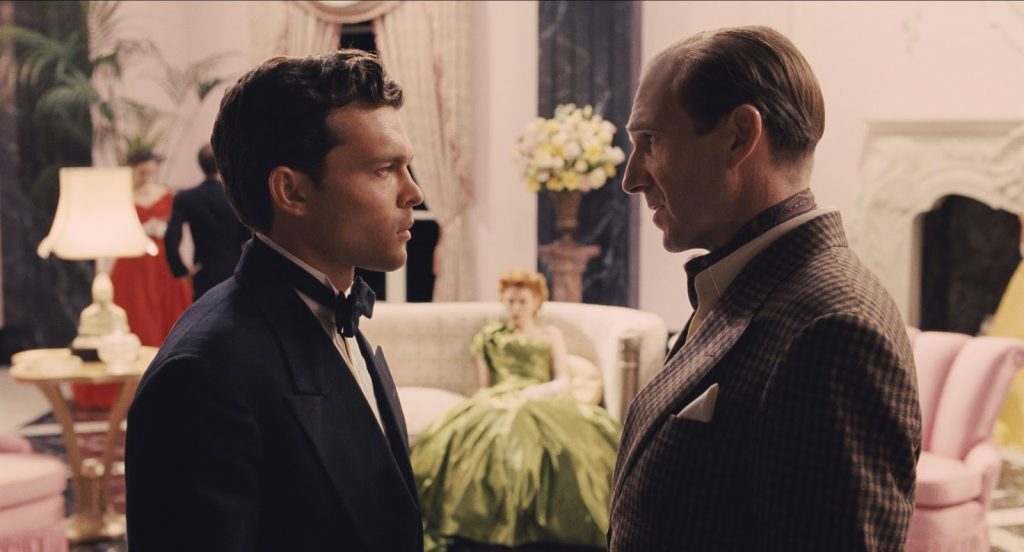 The Coen Brothers move to lighter ground with their love struck send-up of the Golden Age of Hollywood, ‘Hail, Caesar!’ The result is a riotously entertaining picture that delivers the Coen’s expected satirical fun whilst gleefully basking in the nostalgia of the Hollywood studio system.

Capitol Pictures’ Eddie Mannix (Josh Brolin) tries to keep the studio in check when Baird Whitlock (George Clooney) the star of its upcoming prestige picture is kidnapped mid-shoot by a group calling itself The Future.

The Coen’s screenplay dips into an almost madcap screwball comedy style as Mannix begins spinning several plates – from dealing with the Whitlock kidnapping to the scandals of aquatic pictures star DeeAnna Moran (Scarlett Johansson) or temperamental British director Laurence Laurentz (a wicked Ralph Fiennes at his most thespy). Whether running around the studio lot, dealing with stars, appeasing gossip columnists (both amusingly played by Tilda Swinton) or weighing up his future at the studio – there’s a real snappiness the Coen’s screenplay here ensuring we are on-board for the Hollywood hi-jinks from the get go.

In its embrace of classic Hollywood, ‘Hail, Caesar!’ amusingly puts contemporary stars into these roles of yesterday – resulting in numerous amusing set pieces. Changing Tatum’s turn as Gene Kelly like song and dance man leads to classic Hollywood musical number laced with cheeky innuendo, whilst Clooney’s scenes as Whitlock entertain at capturing Hollywood’s former fascination with the biblical epic. There’s further amusement in recreations of the family-friendly western with Alden Ehrenreich (whose undeniable charm is set to make him the breakout star of this)’s country boy turned film star, and a fun take on the aquatic-musical with Johansson’s DeeAnna. These contemporary reinterpretations of ‘wholesome’ Hollywood (and ultimately its subversion) are where the Coens find most of their laughs, and not in the often misjudged kidnap subplot.

The Coens attempt to infuse ‘Hail, Caesar!’ with a paranoia regarding America’s fears of the spread of communism and concern over Russian supremacy – and this is done in a subplot involving the kidnap of Clooney’s Whitlock. The joke is largely driven by the fact that Whitlock is easily converted by the whims of communism despite his place in the joyously capitalist studio system. There’s a certain amusement in this satirical take at how writers view themselves in the studio pecking order, but largely this angle is one that detracts from the prior fun of’ ‘Hail, Caesar!’
Fortunately there is much pleasure to be found in the craftsmanship of The Coen’s film with Roger Deakins’ expectedly superb cinematography capturing the gleam and sparkle of Hollywood whilst showcasing an astounding sense of 1950s aesthetics. The Coens present Hollywood as the new religion – a beacon that people look to for guidance, entertainment, and escape – and the glowing visual might of ‘Hail, Caesar!’ certainly convinces in this.

The Coen’s love for classic Hollywood is ever-apparent in ‘Hail, Caesar!’ a glowing tribute to Hollywood of yesteryear, with enough satirical chutzpah to amuse and engage through.