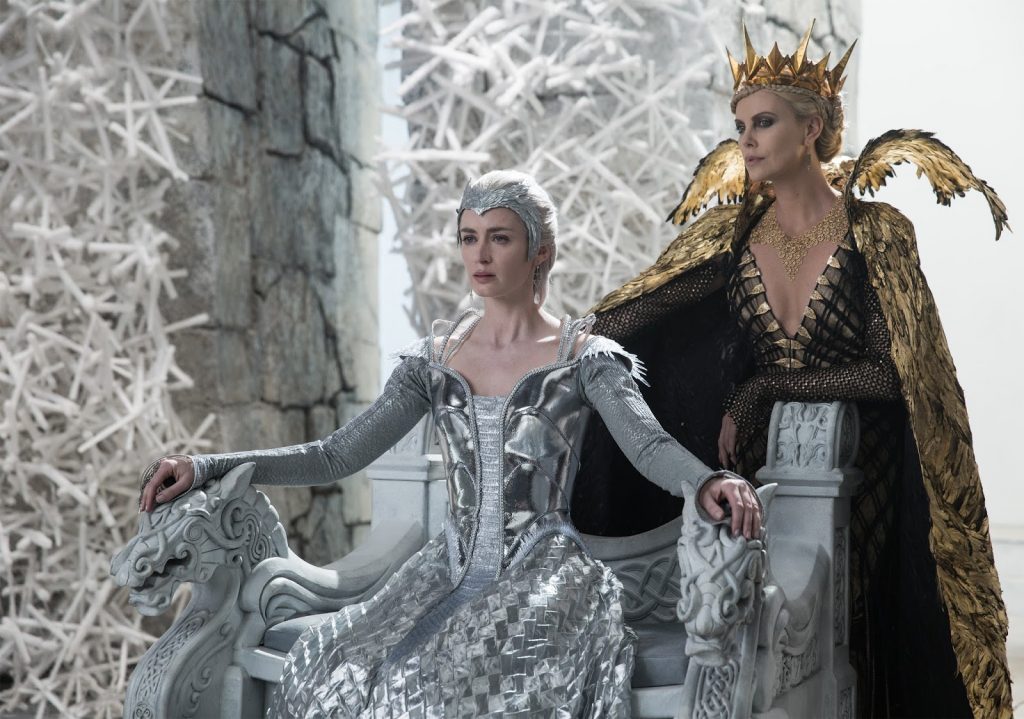 After the scandal that followed 2012’s semi-lucrative Snow White and the Huntsman, 2016’s follow up comes without director Rupert Sanders and the titular heroine played by Kristin Stewart. This in turn proves to be one of the key strengths of The Huntsman: Winter’s War, a mash-up of both prequel and sequel to Sanders’ fairytale. Instead visual effects guru and Snow White’s second unit director Cedric Nicolas-Troyan takes the reins on this follow-up which utilises the best elements of its predecessor whilst also managing to establish its own unique identity – and it’s one filled with visual spectacle and exuberant fairytale camp.

Opening before the events of Snow White and the Huntsman, the film follows the separation of two evil sisters, Ravenna (Charlize Theron) and Freya (Emily Blunt). Freya moves to the North and builds a vast army and establishes herself as an ice queen who forbids love for her kingdom. Two of these warriors are Eric (Chris Hemsworth) and Sara (Jessica Chastain) who are ultimately tasked with stopping her wicked regime.

Evan Spiliotopoulos and Craig Mazin’s screenplay has a paint-by-numbers quality that will be instantly familiar to viewers familiar with other fairytale or fantasy pictures. We see a band of ragtag heroes tasked with the seemingly impossible whilst tackling a variety of foes to achieve their goal. After an overlong opening act that attempts to lay the emotional groundwork, Winter’s War has a strong air of familiarity as Hemsworth’s Huntsman and his gang take-on dwarves, goblins and ultimately wicked queens – not that that is likely to hamper your enjoyment as the material is approached with such charismatic gusto from its performers and visual clout from its direction and production values that it is hard not be absorbed into this shimmering fairytale romp. 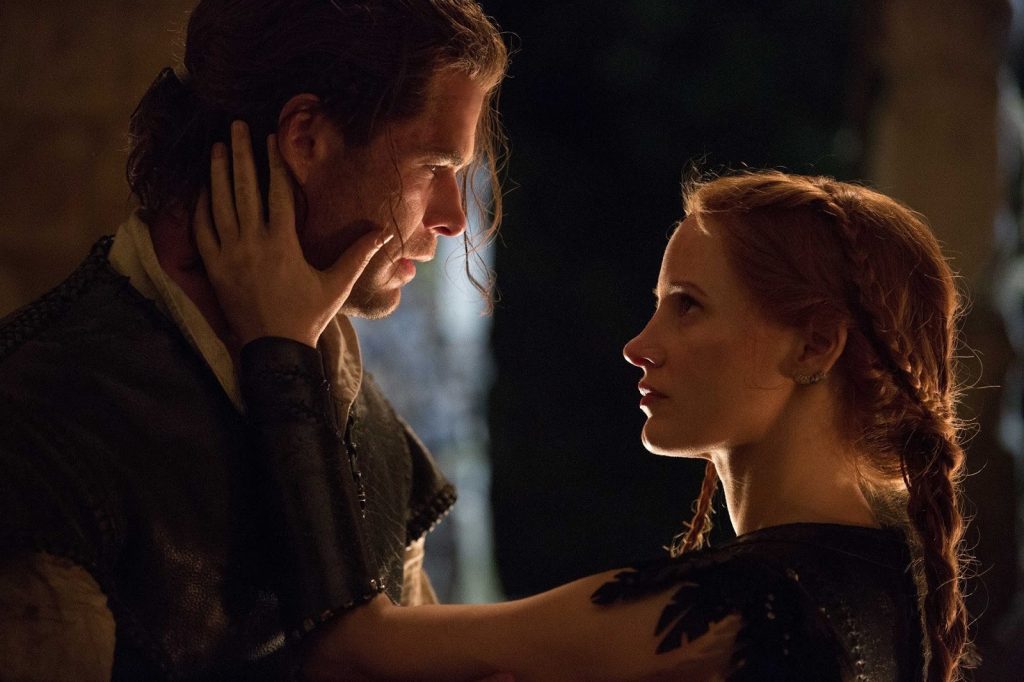 Similarly to its predecessor, The Huntsman: Winter’s War makes use of its fantastical fairytale source material to its utmost. Within the territory of its opposing queens Nicolas-Troyan crafts misty ice kingdoms lead by the decadently costumed Emily Blunt in silver and whites, usually surrounded by shining ice peaks and crunching snow. Whilst on the opposing side, Theron’s Ravenna – albeit on the sidelines for much of the opening and second acts – is surrounded by a rich melting pot of golds and shimmering black. It’s the most beautifully exuberant pantomime you’ve ever seen. In the middle of this is Snow White’s kingdom, an environmental dreamscape packed with lush greens and a variety of cute CGI creatures. This world is visually majestic and is one of the defining factors in sucking us into this characterful narrative landscape. Many of the action scenes make the most of these surrounding visuals, with the finale in particular incorporating a variety of cleverly-crafted CGI tricks to make Winter’s War shine.

Leading The Huntsman: Winter’s War is the stoic Chris Hemsworth who packs the role of the gruff titular warrior with a boundless charisma. The emotional core of the narrative is sycophantic nonsense about the power of love and Hemsworth does his best to convey this with as much conviction as possible, a tough task. The charismatic Hemsworth is aided by a gutsy Jessica Chastain who engages as The Huntsman’s warrior-wife belting out strange catchphrases in a broad Scottish brouge like “Ahhh nevher miss,” as she fires her bow and arrow. It’s Grade A cheese but incredibly fun nonetheless. However, its Theron and Blunt that get to have the most fun as the feuding Queens. Theron is painfully elegant and packs a real wicked nastiness into this, one of her most entertaining roles in a while. Blunt’s Freya has a cold demeanour with a similar wicked elegance that makes her a dream to watch. Praise should also go to Nick Frost, Rob Brydon and Sheridan Smith in dwarf form who deliver well-pitched comic relief, whilst Sam Claflin pops up for a brief moment – presumably as Snow White’s Prince, filling the Kristin Stewart void.

The Huntsman: Winter’s War sticks to familiar narrative territory, but it has a lot of fun doing so. Nicolas-Troyan crafts a visually rich fairytale which shines through Hemsworth’s gruff swagger and its trio of magnificent leading ladies – all ensuring that this is a follow-up that tops the original and is certainly the fairest fairytale film of them all.