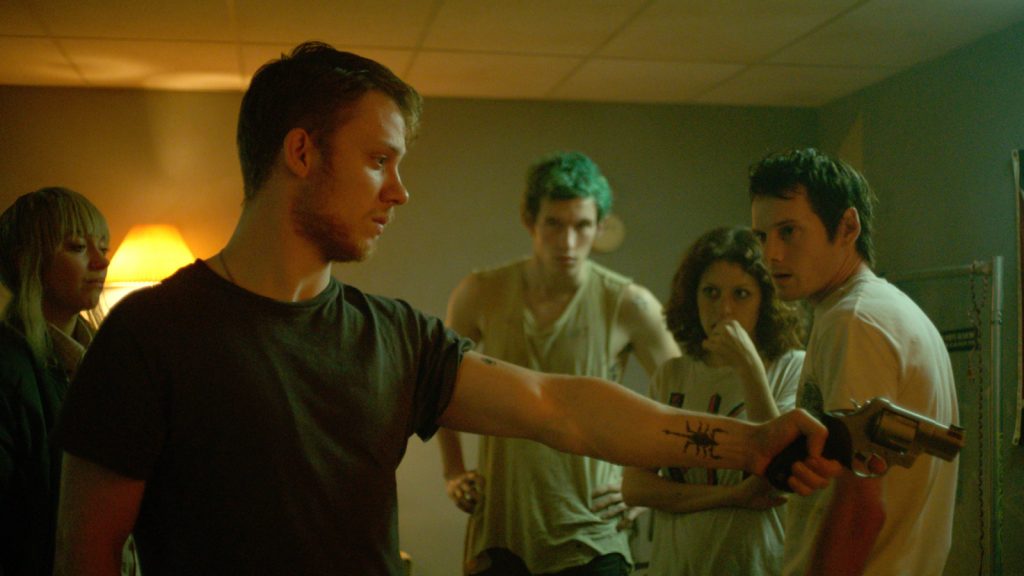 It’s rare that a film makes you experience one spine-tingling moment of dread – it’s even rarer that a film does this to you consistently. Jeremy Saulnier’s Green Room is one of the films that falls into the latter category – one executed with such masterful tension and chock-full of so many moments of chilling dread, that the result is a film you’re unlikely to forget.
In his first feature since the rightfully-acclaimed Blue Ruin, Saulnier writes and directs this tale of a punk band who after witnessing a murder in a white supremacist club are forced into a battle for survival.
There’s a hazy dreamlike quality to the early stages of Green Room as it follows the band as they siphon their way across the Pacific Northwest from one gig to the next. This could initially be an indie drama simply focussing on a travelling punk band, however upon arriving at Darcy Banker’s (Patrick Stewart) skinhead club, events take horrifying turn – subsequently morphing into a violent nightmare. Saulnier’s emphasises the primal nastiness of the film’s tone, perfectly paralleled by the pained war-cries of the punk soundtrack. This paired with an aesthetic that’s grimy, unsettling, loud and just plain nasty makes the perfect combination for a genre flick that is set to disturb.
As the band find themselves trapped in a room with one man-mountain of a skinhead  and an unhinged victim (Imogen Poots) alongside them, as well as a host of untrustworthy opponents on the other side of the door, Saulnier revels in turning the proceedings completely macabre. This is when Green Room’s approach changes from unsettlingly sinister to ferocious and horrifying – from indie-thriller to Grindhouse throwback, dripping in blood and surrounded by snarling rottweilers.
Green Room spares no expense when it comes to depicting the nastiness of our skinhead hosts – combining an atmosphere of masterfully crafted tension and claustrophobia (much gained from close-ups and excellent framing of the titular green room), with a blood-trenched, dimly-lit aesthetic. The gore is piled on as narrative tension escalates both within and out with the green room.
Saulnier builds his feature up to a nail-biting conclusion that keeps us gripped until the final shots, with much of the credit due to the outstanding cast assembled. Anton Yelchin, Alia Shawkat, Joe Cole, and Callum Turner provide excellent natural performances, utterly convincing as the punk rockers thrust out of their depth. Poots gives a remarkable, dazed performance as the scarred Amber. Stewart counteracts these naturalistic performances, with a near-theatrical verbosity which works wonders as he portrays the authoritarian skinhead leader with a strangely calming presence – a direct contrast from the chaos ensuing around him.
There is the sense when watching Green Room that it is going to be remembered as a classic of the genre. It’s an unapologetic throwback to Grindhouse nastiness, thrillingly executed and performed by the film’s cast and Saulnier.
★★★★
Director: Jeremy Saulnier
Stars: Anton Yelchin, Imogen Poots & Patrick Stewart
Release: 13th May 2016