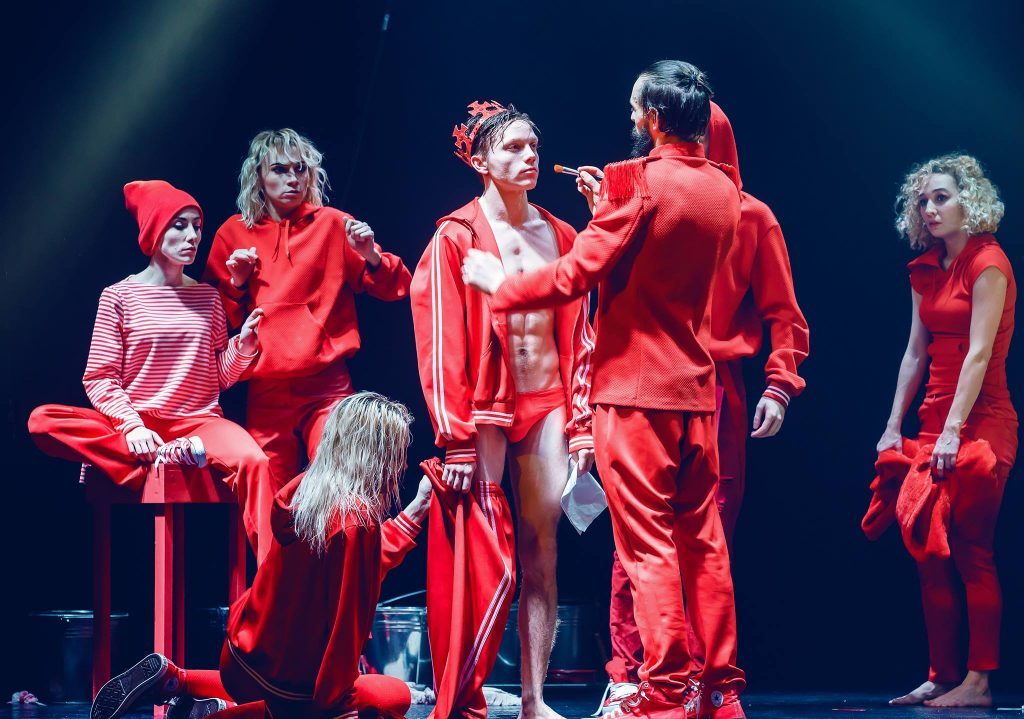 Ukraine’s Misanthrope Theatre bring their production of Ubu the King to C Venues. This classic play from Alfred Jarry gets a hyper-stylised update from this troupe who favour the berserk and high energy in their adaptation.

Jarry’s originally play was written as a parody to Macbeth in 1896 as it follows a ruthless wife who manipulates her husband Ubu into killing the King of Poland. When King himself, Ubu launches a reign of terror on his subjects with dissidents killed and taxes raised. However unrest soon begins to grow against Ubu with his subjects and the Russian Tsar grow tired of him.

Jarry’s play is one that boasts childishness and the absurd – causing chaos upon its debut in 1896 due to its obscenity and bizarre nature. With Jarry satirising wealth and bourgeoise society, Ubu the King has much thematic ground for Misanthrope to play with in their adaptation which blends outlandish comedy with physical theatre reminiscent of the Dada art movement (a post-war theatre movement focussed on the absurd, obscure and nonsensical).

The C South main stage, based in a church, becomes the setting for Ubu the King. The stage is set with a bathtub, metal buckets and a laptop – it is sparse and dimly lit. The cast all donning red sportswear like an Eastern European Olympic team hit the stage before two set the scene by reading an extract from the text from the laptop – the accents are thickly harsh and intentionally deliver Jarry’s prose in a manic way, emphasising curious words.

As Misanthrope launch into the narrative they begin to utilise these props – the bath becomes the site of plotting, but is used throughout in torture scenes with water splashed around the stage. The buckets become inventive ways of torturing those that stand against Ubu in a satirical high camp way with the new King sending anyone who opposes him into one. Staging is effective and high-energy with lighting and dance music producing a strange rave at various points. It’s surreal and amusing at points to watch these ripped performers in half-open tracksuits, dancing around this old church to high energy dance music. Impressive synchronised routines at various points of the show continue to enhance Ubu the King.

Ubu the King provides sensory delights at every corner of the stage. The committed cast are continually providing some form of entertainment throughout the whole play and are fascinating to watch. Despite this, the narrative of Jarry’s Ubu Roi is somewhat lost in this manic production, with those unfamiliar with the text unlikely to grasp what is going on. This is partly due to the thick accents of the cast which mean we sometimes need to strain to understand the dialogue being spoken and whilst this has its charm and feels very Dada and surreal it can inhibit our understanding of certain scenes.

In their presentation of Ubu the King, Misanthrope provide a high energy production with surrealism and Dada-esque humour. It’s frantic sensory overload and a production of which I’m sure Jarry would have been very fond of.