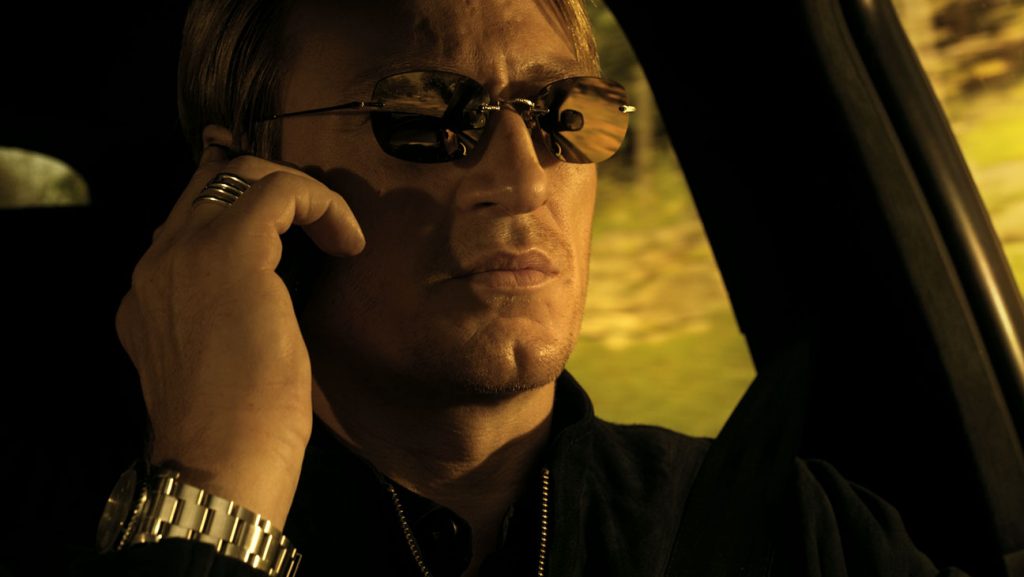 
Penned by Schoendoerffer and Yann Brion, Fast Convoy follows a criminal gang transporting a ton of cannabis from Spain to France by way of a high speed convoy. However, when an unexpected police roadblock appears, chaos ensues and a simple operation gets derailed with hostages, shoot-outs and rival gangs coming into play.

Set predominantly in vehicles speeding along highways, Schoendoerffer does an impressive job at keeping stakes high and tension ramped up for the full run-time of Fast Convoy. There’s a claustrophobic uneasiness and brooding sense of paranoia as these men make their way to France with continual threat of authorities or following cars quietly tracking them. Schoendoerffer throws in a variety of exciting narrative devices into play that ensures stakes remain high at all times – these are mainly introduced after an uneasy police shoot-out between two of the gang members at a police roadblock.

After this tense encounter with the authorities, the gang take a hostage (Reem Kherici) adding to the level of threat in Fast Convoy. Schoendoerffer’s strength lies in this stream-lined narrative that refuses to opt for convoluted plot twists or big reveals, instead focusing on the core idea of a convoy going disastrously wrong. The filmmaker has a strong eye for an action set-piece with shoot-outs and car chases edited with precision and directed with a slick confidence and absorbing sense of tension. Further atmosphere comes from the evocative sun-baked rural Spanish locations, providing an alternative to the greys of a motorway speeding by.

Brion and Schoendoerffer’s narrative takes time to develop its ensemble cast exploring the various relationships within the criminal gang and subsequent tensions. A well-pitched sense of humour breaks up the potentially over-serious tone of the film – particularly a crude rendition of Roxette’s “fighter pilot” song Take My Breath Away. This ensemble is lead by Marseille’s Benoît Magimel. The actor brings a unreadable quietness to the fold as the gang leader who keeps his cards close to his chest . There is a Parisian cool about Magimel that makes him such an engaging lead – from the continual wearing of sunglasses to constant cigarette in his mouth.

Fast Convoy is a high-tension thriller boasting slick and action-packed direction from Schoendoerffer. A magnetic lead turn from Magimel and an impressive ensemble keeps Fast Convoy thrilling throughout.