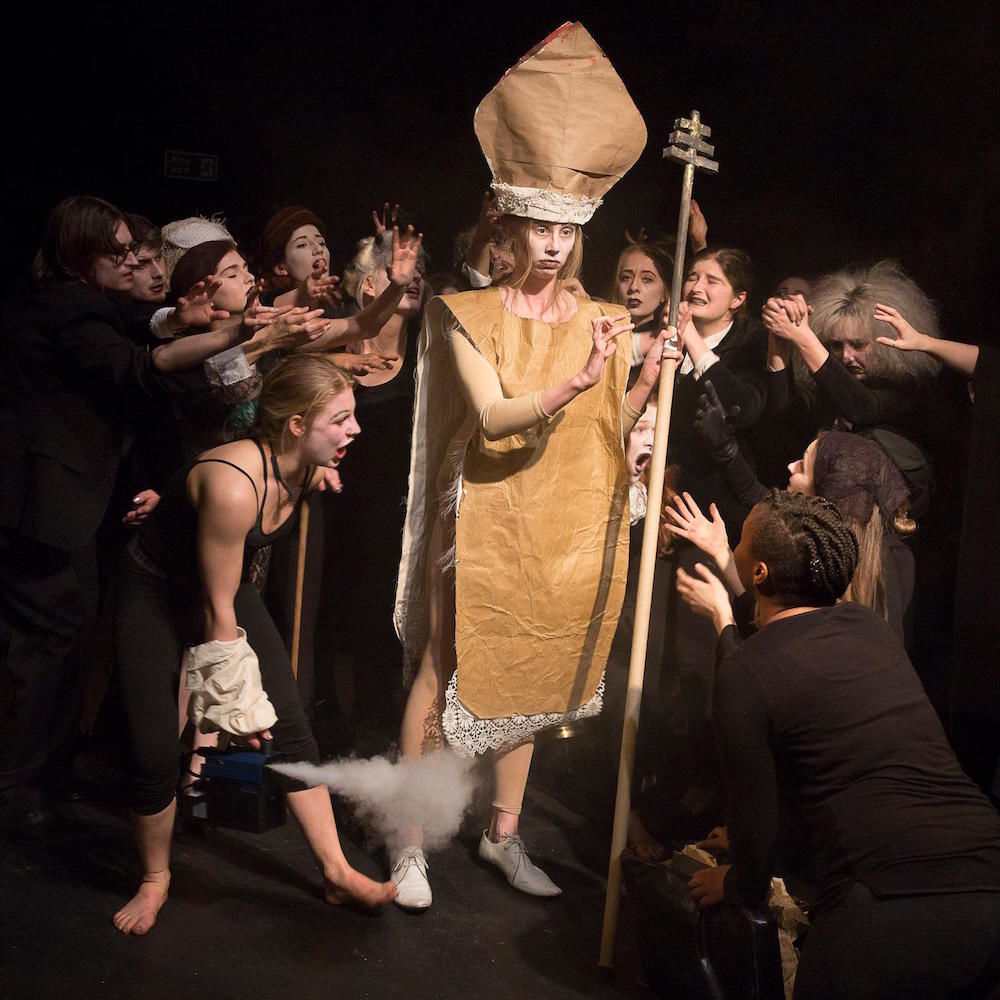 Teresa and Andrzej Welminscy direct Limbo, an ambitious artistic piece which houses itself in Summerhall’s Upper Church this Edinburgh Festival Fringe. With no linear plot structure, and inspiration being drawn from a style of Eastern theatre rooted in chaos, it is no surprise that Limbo is something of an ambiguous, impenetrable piece.

Chairs are lined-up with white face painted figures sit within the audience emerging to take their seats on stage. One by one they are called for judgement and placed in front of a judge where they await their fate. Of course this is a massively simplified version of this chaotic theatrical piece which unfolds over eighty incredibly strange minutes.

One of the joys of the Edinburgh Festival Fringe is walking into shows, bizarre and unlike anything else. With their white painted faces and manic stylistic production, Limbo feels like nostalgic anarchist theatre – unpredictable, strange and not essentially enjoyable. This piece from Meeting Place Theatre notes that it is inspired by Tadeusz Kantor whose productions were steeped in the manic, absurd and avant-garde. In this sense, Limbo feels true to the work of Kantor – it is energetic and frantic, and is likely to have some deeper meaning lurking in the outlandish set pieces which it explores.

Limbo is somewhat impenetrable and chaotic, but will find fans in its avant-garde approach. Absurd moments of slapstick humour (a Chaplin-esque scene where chairs are towered and moved around the space) are welcome breaks from the manic and chaotic scenes of jibberish and frantic physical performance that fills Limbo. The company make good use of the space – signs littered around the hall note ‘Surveillance’ and ‘Silence!’ making reference the culture of perils of 21st Century ‘Big Brother’ society, whilst a sequence in which an old woman flick through TV channels provides further criticism of the contemporary world (Trump, Syria, porn and The Lion King all feature).

Those willing to embrace the chaotic avant-garde of Limbo may enjoy, others will be frustrated by the impenetrable and chaotic madness that will unfold. We’re somewhere in between.