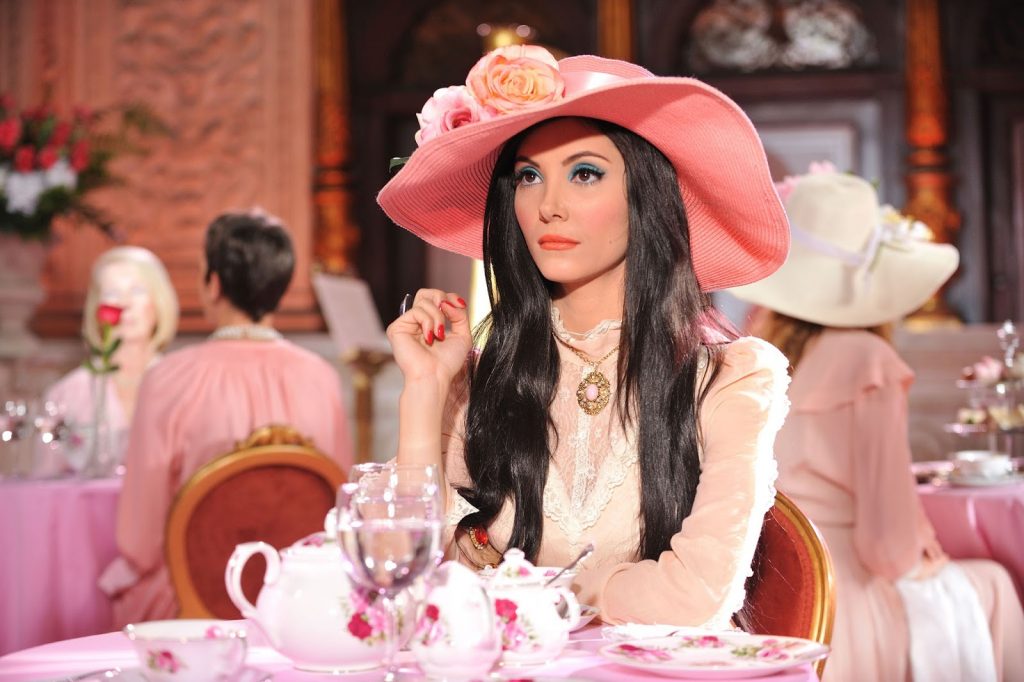 Modern witch Elaine (Samantha Robinson) creates love potions to convince men to fall in love with her. After several of these spells backfire, Elaine arouses the suspicions of law enforcement.

Biller is a one woman dream team and not only serves as writer-director on The Love Witch but takes the role of: costume designer, editor, producer, production designer, set designer, art director and composer. The result is something that clearly works with Biller’s vision and aesthetic shining throughout The Love Witch, a loving celebration of Technicolor – shot on dazzling 35mm film.

The Love Witch is wonderfully eroticised and Biller’s seductive direction combined with a Technicolor palette and sixties aesthetics makes for a sumptuous watch. The film’s earliest sex scene between Elaine and rugged lecturer Wayne (Jeffrey Vincent Parise) is given a hallucinogenic beauty with kaleidoscope effects, rainbow coloured clothing and exciting camera work. This visual clout continues throughout The Love Witch and Biller has really produced a sensational aesthetic piece. Elaine’s apartment for instance is filled with vivid occult paintings, bold purples, blues and yellows and a variety of fascinating prop work. The tea rooms feel evocative of Raquel Welch’s costuming and sets in Myra Breckinridge – light pinks and peaches warmly shot with a decadent glow. Biller provides staggering costume work throughout with Robinson looking sensational in these elegantly crafted gowns and outfits, whilst a Summer solstice scene provides dazzling period wear. Even the camera work fascinates and pays homage to a bygone era with sharp close-ups of eyes and mouths giving the film a claustrophobic intimacy. Every scene in The Love Witch always provides something majestic to look at. 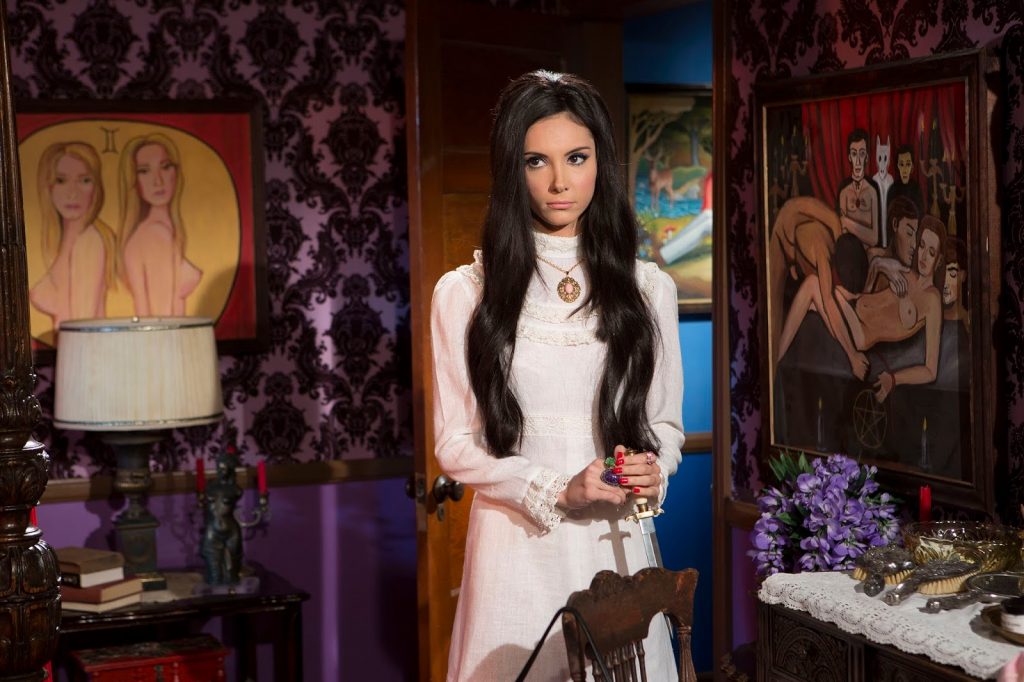 Although you could interpret several pieces of sixties/seventies horror as feminist under a contemporary lens, Biller’s narrative is more direct and effective in its feminist approach. Empowered Elaine’s approach to sex and love is in equal parts fascinating and amusing, with the white witch noting: “Giving men sex is a way of unlocking their love potential,” in a lavishly crafted tea-room scene. It’s with this ideology that The Love Witch presents its satirical look at both male and female desire exploring ideas like men coping with emotions. This is highlighted in an amusing scene where Elaine seduces Wayne who subsequently turns into an emotional wreck, his intense feeling for Elaine literally destroying him. Biller uses the context of occult and erotic cinema to channel these refreshing and amusing views.

Even in terms of narrative framework, there is much excitement to behold. Beginning with a thrilling cliff-top convertible ride, the pace of The Love Witch mostly remains consistent. Each of Elaine’s romances keeps the narrative on track, whilst the police trail (from Gian Keys’ hunky detective) adds sufficient tension to the proceedings. A whirring bossa nova score adds to the vintage appeal, sounding like a somewhat darker Burt Bacharach production.

Biller’s dedication and stunning craftsmanship ensures The Love Witch is an undeniable cult masterpiece that reminds us that the spirit of sixties occult cinema is alive and doing very well.