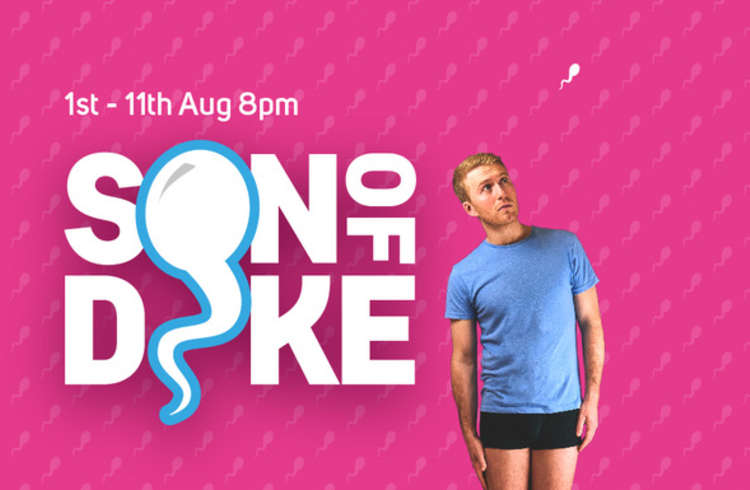 Jordan Weller writes and performs Son of Dyke, an autobiographical one man show that explores his upbringing with lesbian parents. Weller has crafted an enthusiastic and heartfelt piece that dynamically examines the effect of our upbringing on us as people.

Jordan is a young gay man born to lesbian parents. He recounts growing up in this environment and how this shaped his cocksure attitude. However, after the death of one of his mothers, Dawn, Jordan re-examines this identity, his origins and a potential relationship with his sperm donor father.

Weller has crafted a highly comic piece that has several frank and amusing observations on childhood and later life as a gay man. Anecdotes about his mother forcing him to drink soy milk at school, traumatic childhood haircuts, and comments about the quirks and traits of his parents, build the foundations for our picture Weller’s upbringing. It also explores the concept of using humour as a defence mechanism and Weller’s reclaiming of the word dyke after bullies attempt to use it as slur. Hilarity ensues when the performer shares his hand-crafted Endykelopedia with us – examining the various types of lesbian young Jordan could conjure up from Gardening and Hiking to more obscure ones like Lego Dykes.

Son of Dyke gains a more complex sense of emotional pathos when Weller is hit with the news that Dawn dies. This sparks a re-evaluation of his identity as he attempts to fill the void which his mother has left. This leads to journeys to the sperm bank (featuring a hilarious musing on masturbation and goblins), meeting half-siblings and the eventual dilemma to meet his father. Weller crafts a heartfelt narrative as he explores this lack of direction and search for meaning after the death of his mother. A touching sequence where Weller recounts Dawn’s funeral is delivered with a emotional gravitas.

Son of Dyke soars thanks to Weller’s dynamic and humorous storytelling. He is an absorbing orator with frank and intelligent anecdotes, and does not fear taking this one-man show into raw emotional territory.