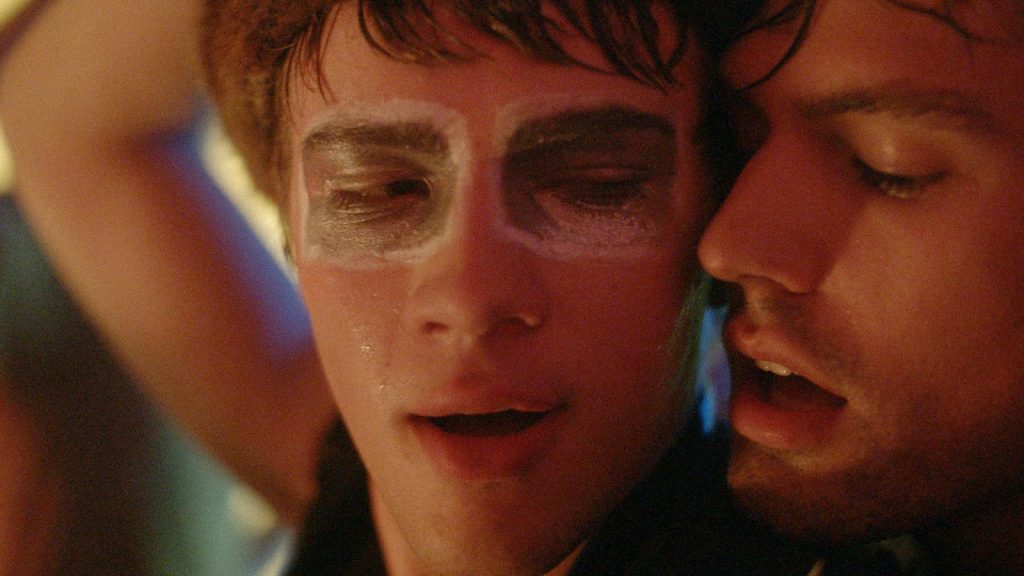 Writer-director Stephen Dunn presents Closet Monster, a tremendously powerful and aesthetically exciting coming of age tale. The film is currently touring the UK as part of POUT Fest alongside Boys on Film, The Girl King, and others.

Closet Monster centres on creative eighteen year-old Oscar (Connor Jessup) who has dreams of escaping his small-town Canadian home, erratically behaved father and the turbulent memories of his childhood. Oscar attempts to suppress his sexuality, but a new-found friendship with an extroverted co-worker makes this a challenge.

In its early stages Dunn’s film does a tremendous job at presenting tough and unsettling themes through the perspective of a child protagonist. Young Oscar navigates through the world with an innocence only a child could feel seen when he’s attempting to hunt vampires or playing with his father (Aaron Abrams). However, the horrors of the world soon rear their ugly head with the young boy witnessing a brutal homophobic hate-crime – an event that triggers the repression of Oscar’s own sexual identity throughout his adolescence. Throw a no-holds barred parental divorce into the mix and we begin to understand the troubles Oscar faces now as an eighteen year old. Dunn’s character work is carefully plotted and authentically shaped, ensuring Closet Monster feels natural and consistently emotive by the time we catch up with eighteen year old Oscar.

It’s this dichotomy of being in or out the closet that drives Closet Monster’s narrative as it explores the damaging effects of repression. This combined with fears of societal expectations – particularly channelled through Oscar’s relationship with his childish and homophobic father, makes for a watch that will speak to many young LGBT viewers feeling alienated by their sexuality and gender. Dunn uses inspired aesthetics to present this repression – touching on Cronenberg-tinged body horror and jarring sound design to capture this as an almost physical transformation.

Closet Monster’s heart not only comes from a raw and staggeringly impressive performance from Jessup, but from Oscar’s relationship with his pet hamster Buffy – voiced by the incomparable Isabella Rossellini. There is a delicate balance between humour and heartfelt emotion as Oscar and Buffy bond and navigate through the world together. Rossellini’s voice work is key to this, channelling a maternal energy and quirky humour into this performance. Jessup excels at capturing the idea of a young person at a crossroads in their life – combined with all the heated emotions linked to sexuality, identity and the emergence of adulthood.

Dunn’s direction is naturalistic and lightly-observant, never feeling intrusive to the powerful narrative and character work. A lively aesthetic seen in neon-tinged party scenes and a synthpop soundtrack (featuring Allie X, Austra and Soldout) ensure that Closet Monster feels alive – fresh and relatable throughout. Surreal touches like the body-horror and Rossellini’s performance help ensure Dunn’s film is bold and original right up until its emotionally devastating finale.