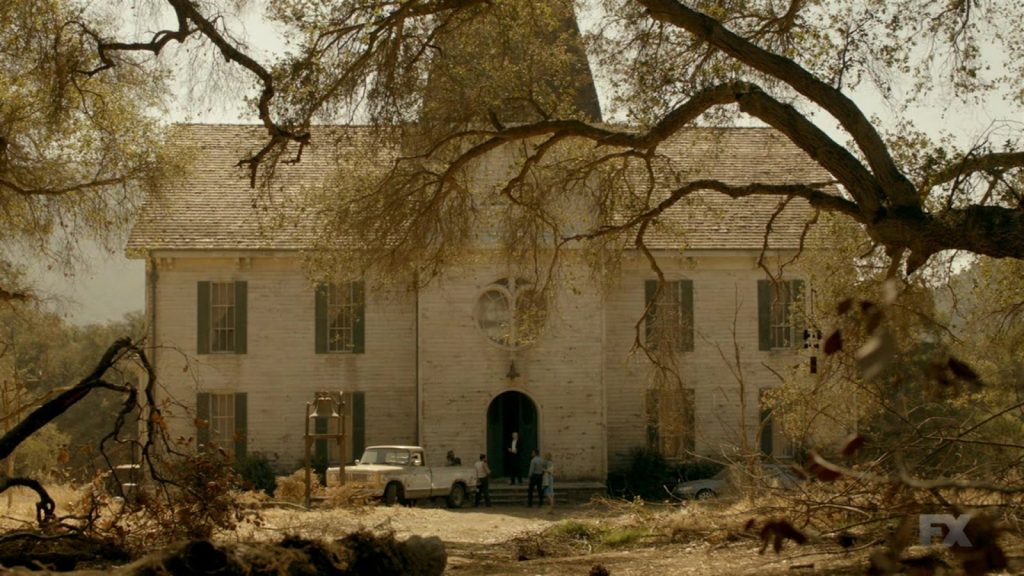 Five years after its
first season aired, American Horror Story has morphed into an entirely different
beast. Premiering to over three million viewers in its debut series, the show
has continued to build in ratings (and fandom) – peaking with AHS:
Freak Show’s impressive 6.13m premiere viewers. However, the show,
despite pulling in solid numbers has seen a gradual decline with AHS:
Hotel (the first season to not feature the triumphant vitriol brought
by beloved fan favourite Jessica Lange) opening to 5.8m and ending on almost a
third of that at 2.2m – perhaps a reflection on the season’s dubious quality? However,
as a self-proclaimed fan of the series, I hope to make a case for how the
twist-filled, self-referential and undeniably trashy sixth season, AHS:
Roanoke, has returned the show to its former glory.

AHS: Hotel had a fantastic setting and jarring real life
premise (thanks to the mysteries of LA’s Cecil Hotel) to craft a satisfyingly
blood-curling horror treat. Yet, this wasn’t to be. Instead Hotel was bloated, disjointed , relied
on a bizarre combination of dull clichés that AHS had previously subverted with pride (vampire children,
fanatical serial killers) and was apparently still trying to find its feet without
AHS’s Grande Dame Jessica Lange at
the centre. Instead producers Brad Falchuk and Ryan Murphy provided a plethora
of beautiful men: Matt Bomer, Cheyenne Jackson, Wes Bentley (thank you again);
the return of AHS regulars (Denis
O’Hare, Sarah Paulson, Angela Bassett, Finn Wittrock, Kathy Bates) to steer the
ship; and more questionably the casting of Lady Gaga at the heart of the drama
as herself  the vampyric Countess.
The result was undeniably the season’s nadir – despite a few standout moments,
mostly courtesy of Bates, Bassett and O’Hare or Cheyenne Jackson’s bum cheeks.  AHS
had gone from top notch horror-tinged drama filled with salacious appeal and
camp, to no-holds-barred messy trash TV. To understand how we got to
genre-bending sixth season, it’s important to understand the position that the
series was left in.

With pretty poor
ratings to close off Hotel, Murphy
and Falchuk really did not have much to lose – perhaps apart from invoking the
wrath of the fandom – by drastically overhauling the series. Instead of the
usual titbits about time periods, casting, and setting that we normally received
throughout Summer, Murphy and the cast were tight-lipped about  any of the content of AHS6 and as the show airs – now it’s fully apparent as to why this
secrecy was so integral. Instead as promo began, we were treated to countless
mixed teasers many of which were dubbed red herrings. Falling teeth, Children
of the Corn style spooks, scythes, eyeballs, wicker creatures and still no set-in-stone
theme.

On September 14th 2016,
these puzzles were answered with the unveiling of American Horror Story: Roanoke –
a series which took the form of a paranormal documentary/reconstruction capturing
the tribulations of yuppie couple Matt and Shelby plagued by the ghosts of the
Lost Colony of Roanoke in their new rural home. After the scattershot  attempts at a cohesive narrative in Hotel,  Murphy and Falchuk have found the perfect format
to go a little more rogue and unpredictable by using the documentary medium.
Here they can play with casting – the real life Matt and Shelby take the form
of Andre Holland and Lily Rabe, whilst their reconstruction counterparts are
Cuba Gooding Jr. and Sarah Paulson. The season reached its five-episode midway
point by delivering grounded and focused rural scares – and without dubbing it realistic,
a slightly more authentic context delivered through the documentary angle.

Within this, however,
Murphy and Falchuk still managed to retain the blend of camp and scares that the
series excels at. Haunted house scares were captured throughout from Shelby’s chilling
encounter in a hot-tub, a pig-headed creature, raining teeth and Kathy Bates’
high camp turn as The Butcher (pronounced Buchaaah). This camp continued in the
sass of Angela Bassett’s heavy-drinking, former cop delivering lines like “Well, I may not have my badge, but Mama’s still packin‘,”  Leslie
Jordan’s Andy Warhol-inspired paranormalist, a frantic Denis O’Hare uncovering
the secrets of Roanoke, Frances Conroy’s creepy hillbilly queen and obviously,
Kathy hacking her butcher’s knife into unsuspecting traitor’s necks in a
delectably thick ye olde English timbre. Gaga is still present but in a reduced
role as forest witch, a move which might have been too extreme of a reduction
given her high profile Golden Globe win for Hotel.
Ten episodes of this might have been pushing our patience, and that’s something
that makes Murphy and Falchuk’s next move so wonderful.

As so many classic
horror films have done, the meta twist is always a good – perhaps ignoring Halloween: Resurrection (although it’s
hard not to find joy in Tyra Banks’ turn as a demented reality producer) and
that’s exactly the curveball that Episode 6 of AHS: Roanoke has thrown at us. Cheyenne Jackson’s filmmaker
character Sidney steps out from behind
the camera to unveil that  My Roanoke Nightmare has been a staggering success and he is quick
to launch a game-changing follow-up. This follow-up, Return to Roanoke,
appears to be the trajectory that the second half of AHS6 will follow –
as it pairs the reconstruction actors (Paulson now with a wonderfully affected
English accent, Gooding Jr., Bassett, and Evan Peters) with the real life Matt,
Shelby and Lee (Adina Porter) in a syndicated Big Brother-inspired follow-up,
with all living in the ‘haunted’ Roanoke house. Gimmicks and cameras are fitted
in the house, whilst alcohol is ploughed to the already volatile cast
(relationships have crumbled since the success of My Roanoke Nightmare) as
Sidney pairs the fragile victims with the inflated egos of the stars. A visit
to Kathy Bates’ Agnes Mary Winstead delivers some Hagsploitation joy that the
series did so well with Lange – showing us the actress driven to insanity
through her obsession with The Butcher she plays, paving way for an iconic high
camp cutaway (below, right).

Throw into the mix, Jackson’s ruthless cash-hungry
producer, some gruesome on set ‘accidents’ and some grizzly found footage
warnings (“Every participant in the series died under suspicious
circumstances” we are warned as the fun begins) and AHS has morphed
into an Unreal inspired meta-horror show – a very far cry from the more
familiar dramatic arcs that its favoured since its inception. As Hotel
descended into borderline unwatchable trash television, AHS: Roanoke has
embraced and subverted this – by literally structuring the series around the
trashiest format imaginable, reality television. As the familiar narrative arcs
of AHS were done so efficiently from Murder House to Freak
Show, a return to this would be welcome at some point – but after the mess
that Hotel left the series in, Roanoke is a welcome change. Roanoke
has restored the series to life with a much-needed revitalising jolt. Welcome
back American Horror Story, you’ve been missed.